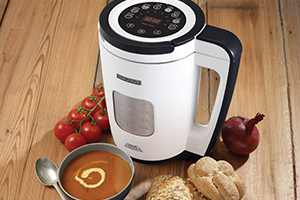 The Total Control 501020 soup maker is the latest in a popular line of soup makers from Morphy Richards. It’s had a makeover, but are the new features worth paying a premium for?

Key improvements over older models include the option to make between two and four portions at a time. Previous models could only make a set four-portion amount. You can also remove the inner pot of this soup maker for easier cleaning.

It’s pricey for a soup-making gadget, though, at around £85. We’ve tried older Morphy Richards soup makers, as well as models from Tefal and Salter, that are easier on your bank balance.

Find out whether this soup maker impressed in our initial try-out by reading the full Morphy Richards Total Control first look review.

The Total Control can make three types of soup, ranging from chunky to smooth. New to this model is the medium texture setting, for when you want a more rustic blend. You also get a sauté function, for frying off ingredients such as onions before the main cooking program starts.

You can make between 800ml and 1,600ml of soup in one go, which is a larger range than you get with some soup makers. A step up in the convenience stakes from the last model is the removable inner jug. At the press of a button, this pops up and can be washed separately.

Other features include a pre-clean option, and the ability to make cold blends such as smoothies and milkshakes. Both are relatively common on rival soup makers though.

To get our verdict on popular models, head to our guide on choosing the best soup maker, which rounds up all our soup maker reviews with an overview of features and prices for easy comparison.

You don’t need a dedicated soup maker to make your own soup. Handheld blenders are a cheap option for blending in the pan, and it’s not too much hassle to swap your soup into a jug blender for a final blitz once cooked.

Some blenders have dedicated soup-making functions, although you’ll pay a premium for this. Lakeland and Cuisinart both make blenders that have a built-in heating element for cooking ingredients before blending.

Nutribullet and Vitamix make blenders that use the heat generated by the blades to both cook and blend soup in one go. These models can make soup in as little as seven minutes, but the disadvantage is you have to have the blender on for the whole time, which can be noisy.

You can see all the soup-making blenders we’ve tested by heading to our soup maker reviews.