This month is the 30-year anniversary of Canon’s EOS system, a principal in the photography and film-making world. Canon is one of the most recognised brands globally, and now encompasses 24 cameras and a range of 97 EF lenses.

While camera technology has shifted over time, it’s only served to inspire photography and film making. Today’s cameras include expert-level tools and features at your fingertips, so anyone can skilfully capture moments in time, just as a professional would.

Canon unveiled its EOS system in March 1987 with the launch of the EOS 650 single-lens reflex (SLR) camera. EOS is an acronym of electro optical system, and the series was the world’s first fully electronic mount system, representing a new generation of SLR cameras.

If you’re interested in buying a new Canon EOS camera, here are some of the latest models we’ve tested. 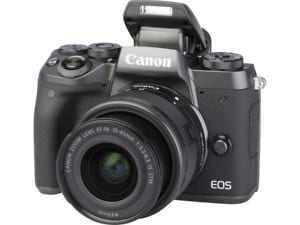 Sitting just above the entry-level M10, the EOS M5 feels like a miniature version of Canon’s EOS 80D camera. It’s a compact system camera (CSC) with an interchangeable lens, APS-C CMOS 24Mp sensor, electronic video stabilisation, twin control dials, and a touchscreen display. At first glance, the M5 takes very good photos, and records Full-HD video. Find out how it stacks up against other EOS cameras by reading our Canon EOS M5 review. 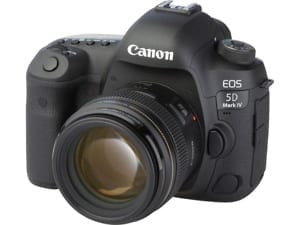 The fourth version of the EOS 5D range, the Canon EOS 5D Mark IV is a DSLR camera with the same full-frame sensor as the Mark III, but with an improved autofocus system. It has a large 30Mp CMOS sensor, 3.2-inch touchscreen display, optical viewfinder, a 61-point autofocus system, and a weather-sealed body. It also can record 4K video at 30 frames per second, and can capture 8.8Mp still images from the video in-camera. See how it compares with other cameras in our Canon EOS 5D Mark IV review. 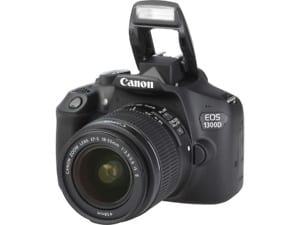 Marketed squarely at first-time buyers or students, the Canon EOS 1300D is a good affordable DSLR. It includes an 18Mp APS-C-sized sensor and a 3-inch LCD display screen, plus it’s light and easy to hold. It also has built-in wi-fi and near-field communication (NFC), which means you can remotely control your camera for group shots or download photos for easy sharing to social media. But does its budget price mean Canon has cut corners on build quality? We tested it in our lab to find out – read our full Canon EOS 1300D review for our verdict. 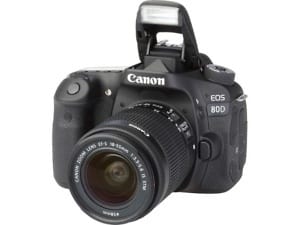 Arriving two and half years after the 70D, the Canon EOS 80D has a higher-resolution 24Mp APS-C-sized sensor, an improved autofocus system, and Full-HD video recording at 60fps. On the outside of the DSLR, there are only a few minor changes compared with its predecessor. The big addition is the headphone port positioned next to the microphone port — both are very useful when recording video. Read on for our in-depth Canon EOS 80D review.