If you’re tired of having to wait two years before upgrading your mobile phone, Sky claims it has the solution. Sky Mobile Swap12 is a new deal that will let you change your phone after 12 months.

‘Customers told us they want an affordable way to have the phone they want, when they want – so that’s exactly what we are doing’ said Stephen Van Rooyen, Sky’s UK chief executive. ‘This means no more paying for expensive upgrade fees or long waits to get the latest models.’

Sounds good on paper, but Which? research reveals it could end up costing over £500 more than alternatives – and there are a few hidden conditions that new customers need to be aware of.

How does Sky Swap work?

Sky’s swap plan works differently to most contracts you’ll get from EE, O2, Vodafone or Three:

Sky is appealing to the impatient with its new Swap12 plan, and there will obviously be a premium involved in swapping your phone after just a year. But how much? And does Sky compete with similar two-year contract deals with its Swap24 plan?

How is Sky Swap different?

Most mobile phone contracts last two years, and factored into the monthly cost is the price of paying off the handset, plus a set price for minutes, messages and data. At first glance Sky’s deals look similar, but the small print tells a different story. Swap24 is actually a 30 month loan agreement, 24 months of which you’re tied to a ‘contract’ with your chosen monthly minutes and data bundle. Swap12 is a 24-month loan agreement. Throughout your contract you are able to adjust your plan using Sky Mix, so if you find you need more data you can change the amount you get each month.

Best Buy smartphones – find out which models are worth your money

Are Sky’s deals cheaper than Vodafone, Three, O2 or EE?

We’ve looked around to see how Sky’s prices stack up to other contract deals for the Samsung Galaxy S8. Your other option is to buy the handset outright and get a Sim-only contract deal. This can often be cheaper since you aren’t paying off the cost of a phone. The cheapest comparable Sim-only deal we found for the S8 was with Three, at £12 per month. 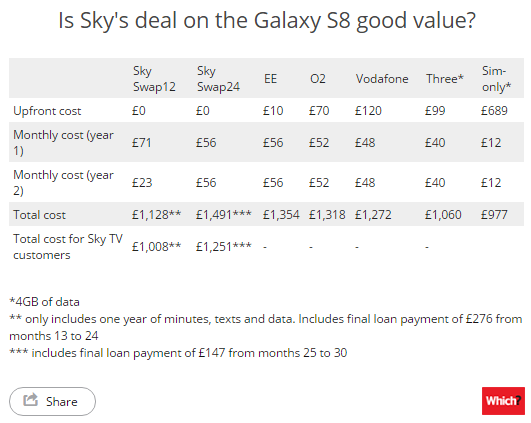 As you can see from the table, Sky Swap doesn’t fare well against alternatives. Swap24 was the most expensive option by a distance. Swap12 appears to be relatively cheap, but bear in mind that this would only include 12 months of minutes, messages and data. Depending on how you go about securing a bundle for another 12 months (in order to make it comparable to a 24 month contract), it could be similarly expensive.

Looking to change network? Take a look at the mobile providers we recommend.

The hidden costs of Sky’s deals

If you choose to send your phone back to Sky after 12 months with Swap12, or 24 months with Swap24, you won’t have to pay the remaining loan amount – essentially Sky has calculated the value of the phone at this stage to be the same as what you still owe them.

That’s assuming your phone is up to Sky’s standards. With the all-new Samsung Galaxy S8 on Swap12, Sky will pay you £276 for the phone after the first year – enough to pay off those final 12 months. But anything from a crack in the case to a software fault could leave you out of pocket.

This PDF from Sky’s website lets you know exactly how much each fault will knock off the price. 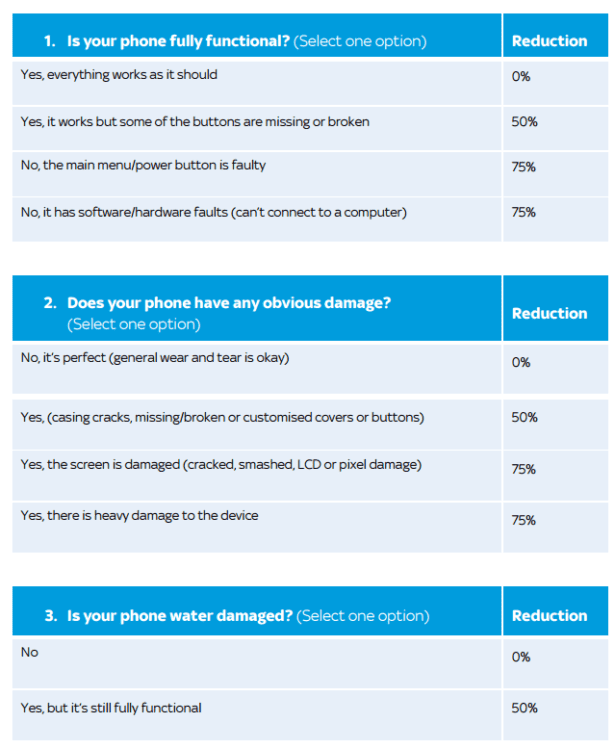 Is a Sky mobile plan worth it?

In a word, no. Even if you’re a Sky TV customer there are far better deals to be found elsewhere:

The cheapest way to get hold of the S8 is to buy it and get a Sim-only deal – expect this to cost you around £977 over two years based on the kind of bundle we’re looking at here. But let’s say you prefer a contract:

If you’re a Sky TV customer:

If you’re not a Sky TV customer:

Figures correct as of 6 April 2017. Contract deals change frequently, we advise Which? readers to shop around before settling on the best deal.

5 mobile phone brands that caught our eye in MWC week