Although Fitbit is a massive name when it comes to fitness trackers, the tech giant is yet to venture into the world of smartwatches.

That could be about to change – and pictures said to show Fitbit’s first smartwatch and Bluetooth earbuds, rumoured to arrive in the coming months, have surfaced online.

The ‘leaked’ image of the mystery Fitbit tracker shows a sophisticated-looking smartwatch with a rubber strap and brown trim. Two physical buttons can be seen on the side. Meanwhile, there are also suggestions that the fitness company is working on a pair of Bluetooth earbuds. Keep scrolling for the details.

Best Buy smartwatches – these products soared through our tests

Speaking to Yahoo Finance, ‘two sources familiar with the matter’ claim that Fitbit’s unnamed smartwatch will arrive with a full colour display and a built-in heart-rate monitor. It will also have a built-in GPS chip and support for wireless payments, a feature that will see it rival the popular Apple Watch. ‘Four days of battery life between charges’ is also mentioned, great news if you’re planning an outdoor trip away from a plug socket.

Yahoo’s sources suggest that the wearable will have an aluminium body and land at around $300 (£230). At the time of writing, we’re yet to hear any official news from Fitbit.

Bluetooth earbuds also on the way?

A new smartwatch might not be the only device Fitbit has been working on behind the scenes.

The same source also mentions a pair of Bluetooth earbuds, said to go on sale later in the year for around $150 (£115). The earbuds (seen below) are designed to wrap around your neck much like the BeatsX headphones, which we reviewed recently. This design would potentially make Fitbit’s earbuds a good fit for runners that are after some durable headphones to partner with their fitness tracker.

While the wait for Fitbit’s earbuds continues, head over to our headphone reviews page to see which models we’ve tested have done enough to earn a Best Buy title. Our audio experts have had their say on headphones from AKG, Apple, Bose and Sony. 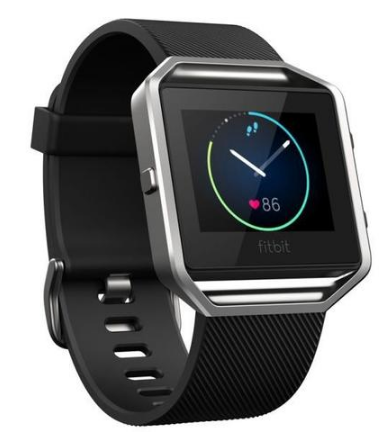 If the pictures above are legitimate, it’s clear Fitbit has taken design inspiration from the Fitbit Blaze (right). The Blaze looks like a pure smartwatch, but it’s primarily a fitness tracker that combines smart notifications with fitness features, like a step tracker and calorie counter. Our lab tests revealed just how accurate its tracking really is, so read our Fitbit Blaze review for the verdict.

If it’s a dedicated fitness tracker you’re after, we’ve tested a wide range of Fitbit wearables including the Fitbit Alta, Flex 2 and Charge 2. Battling against Fitbit are big names including Garmin, Jawbone and Apple, all trying to earn a spot on your wrist. When we test the latest fitness trackers, we run through a routine of daily tasks to see how effectively steps are counted.

If you want to keep up to date with messages, emails and calendar invites, a smartwatch lets you stay on top of your alerts without the need of a smartphone. Typically, smartwatches aren’t as good at measuring movement as dedicated fitness trackers, but our tests prove there are several smartwatches that do a brilliant job.

The Apple Watch Series 2 was released at the end of last year, and if you’re already using an iPhone it’s an obvious option. It’s available in two screen sizes – 38mm and 42mm. There’s not much this smartwatch can’t handle when it comes to smart notifications, and as an added bonus it’s waterproof to a depth of 50 metres. Is this updated model even better than the original Apple Watch? See our Apple Watch Series 2 review to find out.

We’ve just finished our in-depth tests of the Samsung Gear S3 (right). The company’s latest smartwatch is a genuine rival to the Apple Watch, and it has a 1.3-inch 360×360 circular display. It’s powered by a dual-core 1GHz processor, backed by 758MB of Ram. You can use the gadget to respond to messages with a couple of taps and swipes, and a heart-rate monitor and speedometer mean it can also double as an effective fitness tracker. Is the Samsung Gear S3 our highest-scoring smartwatch of the year? Our full Samsung Gear S3 review reveals all.

If you’re trying to decide between wearables, our guide Should I buy a fitness tracker or smartwatch? has some handy tips.