The Huawei Watch 2 Sport is one of the most feature-packed wearables we’ve ever seen, but it doesn’t come cheap.

With a £379 price tag for the 4G model, the Watch 2 Sport is one of the most expensive smartwatches we’ve sent off to our test lab.

Below, we take a closer look at the Watch 2’s key features, also comparing it with one of its major rivals, the stylish Samsung Gear S3.

For more on this feature-full wearable, see our Huawei Watch 2 Sport first look review. You can also see the device in action with our first impressions video from Mobile World Congress 2017 below.

New Android smartwatches just keep on coming, and the Huawei Watch 2 is one of the latest to hit the market. It follows in the footsteps of the original Huawei Watch, which was released back in 2015 with a built-in heart-rate monitor. 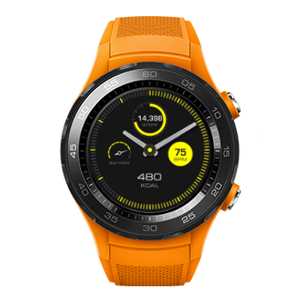 Even though we haven’t tested the Watch 2 in our lab just yet, we’ve been pretty impressed with the smartwatch from the time we’ve spent with it so far. It’s genuinely remarkable how Huawei has managed to tuck so many clever features underneath that 2.1-inch display.

The Watch 2 Sport runs on Android Wear 2.0 – a significant upgrade which has brought far more independence and flexibility to Android smartwatches.

Read more about the features on offer in our guide to How to buy the best Android smartwatch.

We’ve been trying out the Sim-friendly 4G model, which works independently so you can make calls and browse the web without piggybacking off your smartphone signal. It’s NFC compatible too, which means it supports Android Pay. That’s great news if, for example, you don’t fancy reaching for your Oyster card on the London Underground.

This is a tough smartwatch. It’s dust and water resistant, so you’ll have no problems using it in the rain or on a muddy hike. Fitness fans can also try out the heart-rate monitor, which helps you track your workouts.

Even if you’ve decided to buy an Android smartwatch over an Apple Watch, there are still some decisions to be made. There’s certainly no shortage of smartwatches to choose from, with products on offer from the likes of Pebble, Sony and Garmin. Arguably, though, the Watch 2’s main rival is the Samsung Gear S3.

The Samsung Gear S3 is cheaper than the 4G Watch 2 Sport, up for grabs at around £280. It doesn’t have quite the same array of features, though the Gear S3 has a slightly larger screen. You can use it to read and respond to texts on the move, and it has a built-in speaker and microphone. As is the case with the Watch 2 Sport, there are various fitness features including a heart-rate monitor, altimeter and speedometer.

We put the Samsung Gear S3 through its paces earlier in the year, paying close attention to ease of use, movement tracking accuracy and durability. To see if it performed well enough in our test lab to earn a Best Buy title, head over to our Samsung Gear S3 review. Our table below also offers a look at what sets the two gadgets apart from each other.

If you’re not convinced by either the Huawei Watch 2 Sport or the Galaxy S3, head to our Best Buy smartwatches – these deserve a spot on your wrist.