Google Home is the first viable alternative to the Amazon Echo and now, after examining the results of our lab tests, we know which is the better option.

There’s nothing wrong with a bit of healthy competition and Echo has gone virtually unchallenged for too long. So which one should you choose to best serve your smart-home controlling, internet-querying and music-playing needs?

What is Google Home?

It looks like it could be an air freshener, but the discreet unit isn’t designed to make your home smell nice. It’s designed to make it smarter. It wirelessly connects to your router and other smart devices in your home and allows you to control them with your voice.

Devices, such as Nest thermostats, Philips Hue light bulbs and Chromecasts usually have to be controlled through an app on your phone or tablet but you can tell Google Home what you want them to do instead. That could be bumping up the heating by a few degrees, dimming the lights in your bedroom or asking your Chromecast to play a specific Netflix movie on your TV.

There’s a speaker built in to Google Home too, which means the Google Assistant can talk back. Being able to tap straight into the world’s biggest search engine has its advantages, and the assistant can answer scores of queries. The Home’s clever AI (artificial intelligence) means it remembers earlier questions, which makes it seem like you’re having a conversation.

The assistant can’t exactly wax philosophical, and you won’t find yourself burning the midnight oil questioning the meaning of life by the fireside, but if you ask it to tell you China’s national dish and then follow that up with ‘what’s in it?’, Google Home will understand you’re asking for the ingredients for Peking duck.

The speaker isn’t just for the assistant’s dulcet tones – it can play music too. Connect your Spotify or Google Play Music account and you can ask the assistant to play any song included in that service’s library. We’re currently running Google Home through our speaker test to see if it’s good enough to be your main music player. 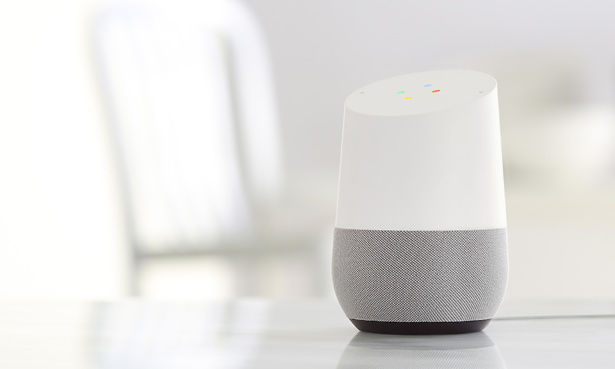 How does it compare with the Amazon Echo?

On paper, it looks as though Google Home and the Amazon Echo were cut from the same cloth. They are both speakers, both voice-activated and they can both control your smart-home devices – does anything separate them?

Does Google Home have any unique features?

For now, Google Home is the only hub that recognises who is speaking to it. This makes certain commands, such as ‘OK Google what have I got on today?’ more personal. Instead of reeling off everything in everyone’s calendar, it will only give information relevant to who is talking to it.