If you’ve baulked at the idea of taking your camera on holiday because you’re worried about it being damaged by water or worse, these latest waterproof cameras could be just the ticket.

Nikon, Olympus and Ricoh are the latest camera manufacturers to release models that allow you to take photos and videos of your underwater adventures. They are rugged, waterproof and still able to take decent photos.

Are these tough cameras worthy of your consideration? We’ll be getting them into our lab as soon as possible but, ahead of our tests, we run through their key features and specifications. 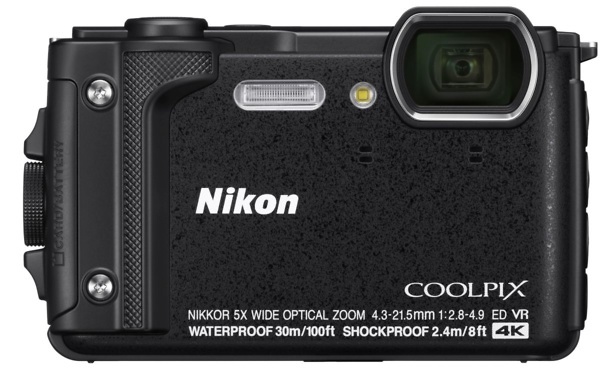 Replacing the Coolpix AW130, the Nikon Coolpix W300 is especially noteworthy because it captures 4K video at 30 frames per second (fps). This is a significant upgrade on the previous model’s Full-HD video. The optical zoom is the same as on the AW130 (5x) and, similarly, it has the same-sized 16Mp CMOS sensor.

Thanks to built-in GPS, the camera can track locations of your photos and video, so you won’t have trouble remembering where you took that shot. It also includes a built-in altimeter and depth gauge to keep you informed at all times.

In terms of its toughness and water resistance, on dry land it’s claimed to withstand drops of up to 2.4 metres, and be waterproof down to 30 metres (the same depth rating as some action cameras).

The Coolpix W300 is available in three different colours (orange, yellow or black), and is in stores now from £389.99. 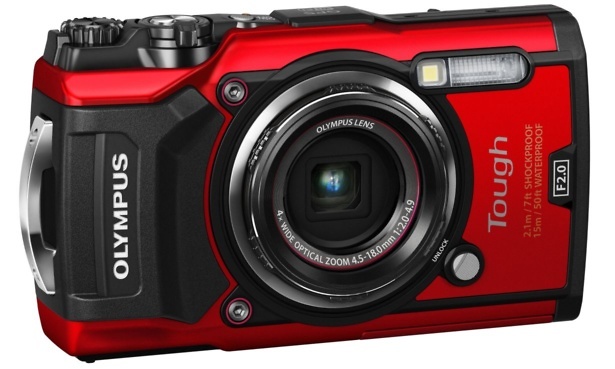 The Olympus TG-4 was one of our favourite cameras, and we expect the Olympus Tough TG-5 to live up to the same lofty standards. Olympus has dropped the megapixel count from 16Mp to 12Mp with this latest model, which could translate to better image quality, but has increased video-recording resolution up to 4K at 30fps. There has also been an additional tweak with the rear screen – Olympus has added dual-panel glass to cut down on fogging with rapid changes in temperature.

It’s not called ‘Tough’ for nothing: the TG-5 is claimed to be waterproof to depths of 15 metres, and survive drops of up to 2.1 metres on land. Additionally, if you’re a little bit clumsy, the TG-5 should withstand a crushing force of up to 100kg.

The TG-5 also uses the same built-in sensor system as Olympus’s TG Tracker action camera. It uses a GPS, pressure, compass and temperature sensor, so that data gathered can be overlaid on your photos or videos via the Olympus Image Track app. 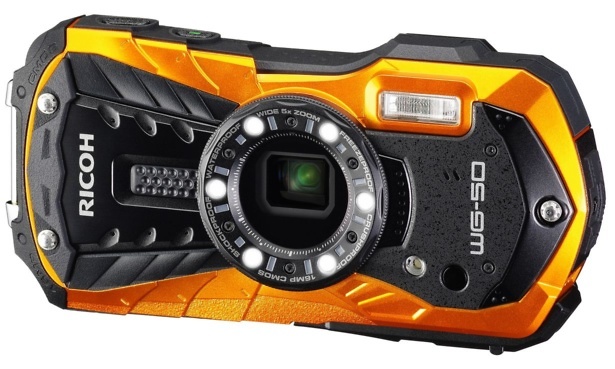 Rivalling the new rugged waterproof cameras above is the Ricoh WG-50. With a 16MP CMOS sensor and 5x optical zoom, the WG-50 also includes six LED lights placed around the lens barrel – perfect for uniform lighting of your subject, especially when underwater. However, unlike the other two cameras listed here, the WG-50 is limited to recording videos in Full HD at 30fps, and HD (720p) up to 60fps.

The WG-50 is pretty robust; it’s claimed to be dustproof, waterproof to depths of 14 metres, shockproof when dropped up to 1.6 metres, and able to withstand crushing forces of up to 100kg. Similar to an action camera, the WG-50 is compatible with a wide range of mounts, which means you can attach it to things such as a bike handlebar, chest harness or car windscreen.

Available in black or orange, you can find the WG-50 in high street stores right now for £249.

We’ll find out just how well these cameras perform when we put them through our tough tests and will bring you the results as soon as we have them.