The issue first arose in July 2015 when Nikon posted a warning on its advisory page that the shutter was not functioning properly, sometimes resulting in a ‘shading of a portion of the images’.

In this latest and third recall notice, Nikon has expanded the timeframe again to include any D750 model manufactured from July 2014 to September 2016. This means that any model made during this period is eligible for inspection and repair of its shutter.

How to check if your camera is affected 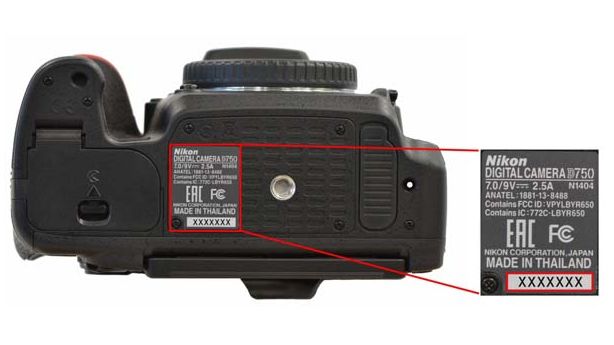 As shown in the image above, you can find your camera’s serial number on the base.

Then, using Nikon’s serial number look-up tool, you can identify if your camera is affected. The tool will provide full instructions on how to send your D750 back to Nikon for repair free of charge, even if the camera’s warranty has expired.

For Nikon’s full advice on the issue and to contact Nikon with any further queries, read the full Nikon D750 product recall advisory text.

Your rights when there’s a product recall

If you become aware that a product you own has been recalled or had a safety noticed issued against it, make sure you follow any instructions given to you by the manufacturer.

If you don’t receive instructions, check the manufacturer’s website or, if there is a safety concern, stop using the product immediately.

The product’s manufacturer should communicate with you about the recall and state how it will work. It should also give you an idea of how long the process will take.

You should not be charged for any recall work – such as a repair to your product.

Sometimes the manufacturer will offer you a deal where, instead of a repair, you are given a replacement at a greatly discounted rate.

You’ll need to weigh up the age of your product and how much the manufacturer is charging to see if this represents good value for you.

For more on your rights in a recall visit Which? Consumer Rights.