One of the biggest names in the wearables market, Garmin, has unveiled not one, not two but a whopping three new wearable devices at IFA 2017. With a range of new features and price points, is there a device for everyone?

The latest Garmin devices are due to launch later this year. Here we take an initial look at the features on offer.

Garmin fitness watch and activity tracker reviews – find out how previous Garmin devices have performed in our tough testing. It may look similar to the Garmin Vivosmart 3, but there are at least a couple of features this slimline Garmin Vivosport activity tracker packs that the Vivosmart doesn’t: built-in GPS and a colour display.

It has all the standard fitness tracking functions – including steps, calories and distance – plus a built-in heart rate monitor and fitness apps for tracking a range of sports or exercise.

Like the Vivosmart it can calculate your VO2 max and stress and it’s swimproof. It also has music playback controls that let you skip through and pause or play music on your chosen streaming service on your smartphone.

The Vivosport is going to be available for $199.99, or roughly £160. Look out for our full first look soon for our initial impressions or, to find out what we thought of similar Garmin devices, head over to our full Garmin Vivosmart 3 first look and our Garmin Vivosmart HR+ review.

We tested the original Vivomove earlier this year, and liked its simple but stylish design. At IFA 2017, Garmin announced two new additions to its hybrid smartwatch range – the Vivomove HR Sport and HR Premium.

Both have a classic analogue watch style with a round colour touchscreen, and the HR Sport is available with a sport band while the HR Premium comes with a leather strap and full steel body.

The new Vivomove wearables have built-in heart rate monitors, something that the original lacked, and they can also be used to track steps, ‘intensity minutes’, sleep, and floors climbed. The devices also calculate your fitness age – a metric recently embraced by TomTom.

The Vivomove HR Sport will cost $199.99 and the premium model will cost $299.99, or roughly £160 and £240 respectively. We’ll review the new Vivomove devices later this year, but in the meantime check out our full review of the original Garmin Vivomove. 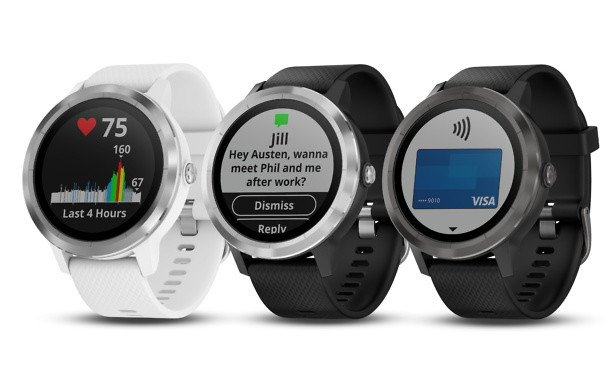 The Garmin Vivoactive 3 was originally revealed by Wareable in early August, but now it’s been officially announced by Garmin. It has a round screen, which is new to the Vivoactive range, and will be available in three colours.

The Garmin Vivoactive HR had a rectangular screen that we found bulky and obtrusive, so a more traditional watch design is a welcome change. Hopefully it will be a wearable that’s comfortable to wear on a daily basis, rather than only being suitable for gym sessions.

The latest Vivoactive device also has a new Side Swipe feature, which lets you control the watch by swiping on the bezel. We’ll try this out soon when we get hands on with it.

There’s also NFC on board, which unlocks the brand new Garmin Pay – meaning you can use your wearable to make contactless payments. It will range in price from $299.99 to $329.99, depending on the strap and bezel option you pick (around £240 and £260).

Find out what we thought of its predecessor when we put it through our tough testing by checking out our full Garmin Vivoactive HR review.

How does Garmin compare to its rivals? Find out with our fitness watch and activity tracker reviews.