The Veggie Bullet is the latest nifty gadget from Nutribullet brand Magic Bullet. It’s claimed to speedily shred, slice and spiralize fruit and veg to help you on your way to five-a-day. We’ve taken it for a spin to bring you our first impressions.

The Veggie Bullet is the first food processor we’ve seen that can spiralize, so if you’re a fan of courgetti-style vegetable noodles it could be right up your street. It will set you back more than £100, though – so is it worth the investment?

Watch our video preview below, and then get our verdict in the full Veggie Bullet first look review.

What you get with the Veggie Bullet

Simplicity has always been the bedrock of Nutribullet products, so you’ll find just the one button for switching it on and off, and no pulse function or variable speeds to contend with. It sticks to the basics of food prep: grating and slicing – with a side of spiralizing.

If you’re tired of trying to find space for a bucketful of different processor attachments in your kitchen, this could be a bonus. But if you want to chop, blend, mix, whisk, whip or knead, you’ll need to look elsewhere, as the Veggie Bullet can’t help you. See our round-up of Best Buy food processors for multi-taskers that won’t cost the earth.

What the Veggie Bullet does have is a comprehensive recipe booklet that offers bags of inspiration if you’re keen to get more veg in your diet. This glossy recipe book approach was part of the secret to the Nutribullet blender’s success, and the Veggie Bullet is no exception. It’s bang on trend, too, covering everything from beetroot burgers to cauliflower couscous. 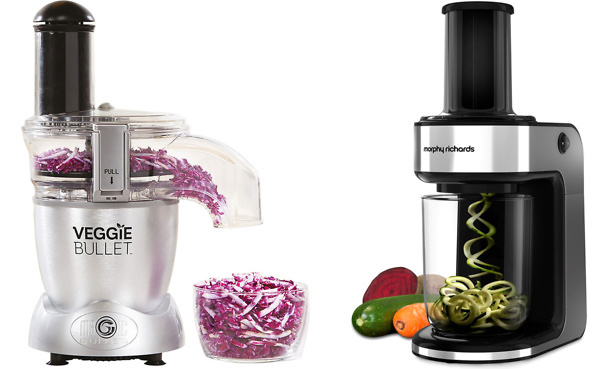 The Veggie Bullet is unique in that it offers a 3-in-1 package, allowing you to spiralize veg, as well as slice or grate. However, it’s five times more expensive than a standalone electric spiralizer, so it’s worth thinking about whether it’s the right gadget for you.

Most manual or electric spiralizers come with between two and four noodle blades, offering you a choice of thin or thick noodles, and narrow or wide vegetable ribbons. This gives you more versatility, so for example you could make courgetti noodles for bolognese, squash ribbons as a substitute for tagliatelle or thin carrot and cucumber slivers for a Thai salad.

The Veggie Bullet just offers one standard noodle size, but we thought it was a good medium-thick noodle that held its shape when cooked and worked well in both pasta dishes and stir fries. Find out whether an electric spiralizer could be a worthy alternative by heading to our electric spiralizer first look reviews.

Do you need the Veggie Bullet?

Unlike some manual spiralizers, you’ll need to cut larger veg to fit, so the Veggie Bullet is likely to be most useful if you mainly spiralize long, regular-shaped vegetables like courgettes. If you’re finding veg prep a strain, see the full Veggie Bullet first look review to get our verdict.

If you’re just starting out with spiralizing, it might be worth trying a cheaper manual spiralizer to see if you like it. Some cost less than £10, and the best ones will be perfect for the occasional courgetti dinner. For more advice on choosing a spiralizer, check out our spiralizer buying guide.

Cordless, petrol or electric – which type of lawn mower can you rely on?

How to deep clean your kitchen appliances