When you browse the rows upon rows of designer frames in your local opticians you may not realise that which ever you choose, your money is likely to end up with one of a few huge manufacturers that dominate the glasses industry.

Considering Chanel, Paul Smith or Prada? They are all actually made by Italian eyewear company Luxottica. The firm owns, or holds the licence to manufacture, 28 well-known or designer brands through brand licensing agreements.

Torn between Jimmy Choo or Givenchy frames? They are both made by Safilo who owns or licences 25 brands.

We asked 2,174 Which? members about the practice of brand licensing and found that only three in 10 were aware that this routinely happens with designer frames – but it’s actually very common.

Andrew Levy,  managing director of Licensingpages and author of Secrets of Success in Brand Licensing, explains: ‘Eyewear brand licensing is big business. In fact, it’s rare for a designer to manufacture frames. The industry is dominated by a handful of manufacturers, and with their cost efficiencies of manufacturing scale and distribution, designers are naturally steered towards them.’ However, the brand still has significant input depending on the terms of their license agreement and will approve the products at several stages of production. 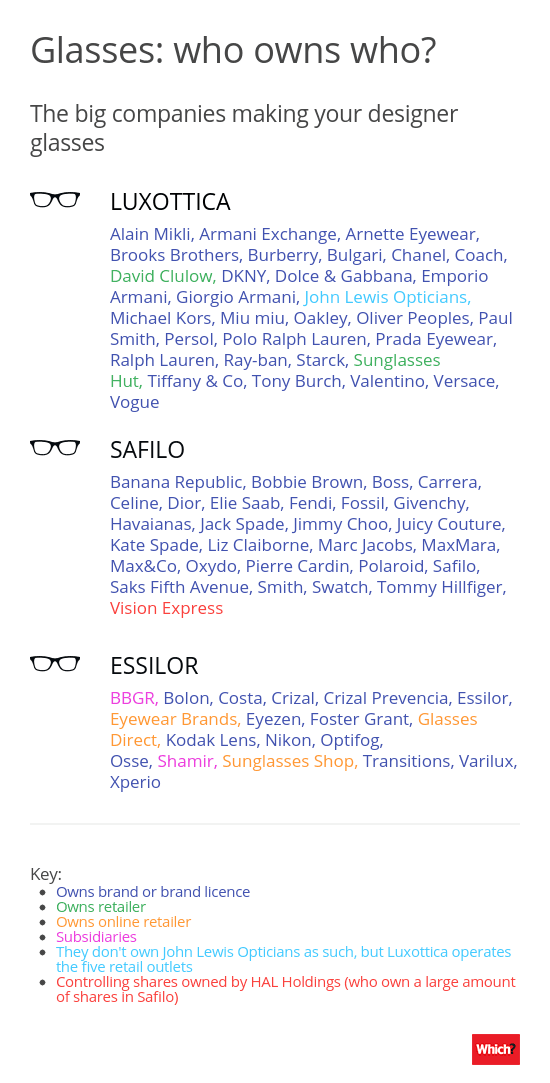 But even if your high street optician isn’t owned or part owned by one of these big eyewear companies, it’s likely that its range of suppliers won’t be hugely extensive. Gordon Ilett, member of trade body the Association of Optometrists says: ‘If an optician wants to stock Ray-Ban sunglasses, for example, they are likely to have to agree to stock a certain number of different Ray-Ban styles and will also be encouraged to stock a number of other brands from that manufacturer. This will only leave room on the store display with perhaps one or two other suppliers’.

While there are a number of lens manufacturers out there, the biggest is French company Essilor. Essilor licenses for Kodak and Nikon as well as producing own-brand lenses for retailers and its own labels such as Varilux and Xperio. It also owns online retailers Glasses Direct, Eyewear Brands and Sunglasses Shop.

Essilor and Luxottica are planning to merge later this year, subject to checks from the relevant competition authorities, which will give these companies an even greater dominance in the eyewear market.

Some optometrists fear that this isn’t great news for shoppers. Gordon Ilett says: ‘the merger may ultimately lead to less choice for the consumers due to the continued homogenisation of the market’. In the long term it could possibly lead to to lower quality products as ‘reduced competition often leads to reduced innovation.’

More important the brand of product you choose though is the overall service you receive from your optician. Read our guide to the best places to have an eye test.