The final commemorative coin in the popular 2017 Beatrix Potter series has been made available for sale by the Royal Mint.

The 50p coin, depicting Benjamin Bunny, is available to pre-order on the Royal Mint website. A silver-proof commemorative version printed in colour can be bought for £60, while a mint condition version of the standard coin is available for £10. But you’ll have to be quick to get hold of a coloured coin, as only 30,000 coins will be minted.

Previous coins in the series have sold for hundreds of pounds, so it’s possible that the Benjamin Bunny coin could also attract a premium price.

To celebrate Beatrix Potter’s 150th birthday in 2016, the Royal Mint launched a series of 50p coins, depicting three of the beloved author’s most popular characters – Jemima Puddleduck, Squirrel Nutkin and Mrs Tiggywinkle. As well as standard coins to be released into circulation, the series also included coloured commemorative versions.

In 2017, coins depicting Peter Rabbit, Jeremy Fisher and Tom Kitten were released. The Benjamin Bunny coin is the seventh and final coin in the series to be made available for sale.

Due to the low mintage, these coloured coins became prized by collectors and sold out very quickly. Many were put up for sale on online auction sites for far more than their original £60 cost – the Peter Rabbit coloured coin is currently valued at £600 by comparison site GoCompare. But this may also be due to scarcity, as just 15,000 Peter Rabbit commemorative coins were minted, compared to 30,000 showing Benjamin Bunny.

Now that all coins in the series have been released, a full set of all the Beatrix Potter coins is likely to be in high demand. Previously, a set of five coloured Beatrix Potter coins sold for £800 on Ebay, and collectors may be eager to add the latest releases to their collections.

Yet the standard silver coins are also attracting interest. The Royal Mint recently revealed that just 2.1 million Jemima Puddleduck coins were released into circulation, making it hard to for collectors to secure one. By comparison, 9.6 million Peter Rabbit 50p were released. At this stage, the Royal Mint has not announced how many silver Benjamin Bunny coins will be minted.

What is a commemorative coin?

Commemorative coins are designed and created by the Royal Mint to celebrate key events, anniversaries and royal occasions. They coins are typically crafted more meticulously than those in general circulation and are designed to be used as souvenirs.

In the case of the Beatrix Potter series, the commemorative coins were struck in 925 sterling silver and finished to proof standard, as well as being enhanced by colour printing.

These coins are classed as ‘legal tender’, but neither retailers or banks are obliged to accept them. If you’re keen to use them as coins as circulation, your best bet is doing so at the Post Office. But given their high cost price, you’re likely to get better value by selling them on to collectors.

The Royal Mint also releases coins which are BU standard – meaning ‘brilliant uncirculated’. These coins are the same as the regular coins which are put into circulation, but have never been publicly released and are in pristine condition.

What makes a 50p coin valuable?

Low mintage figures tend to make a coin more valuable, as well as prized designs. The lower the mintage for a popular design, the more in demand a coin is likely to be from collectors.

Coloured commemorative coins won’t turn up in your pocket, as they can only be bought online or directly from the Royal Mint. The infographic below reveals the rarest coins that are actually in circulation and how much they’ve been changing hands for on eBay. 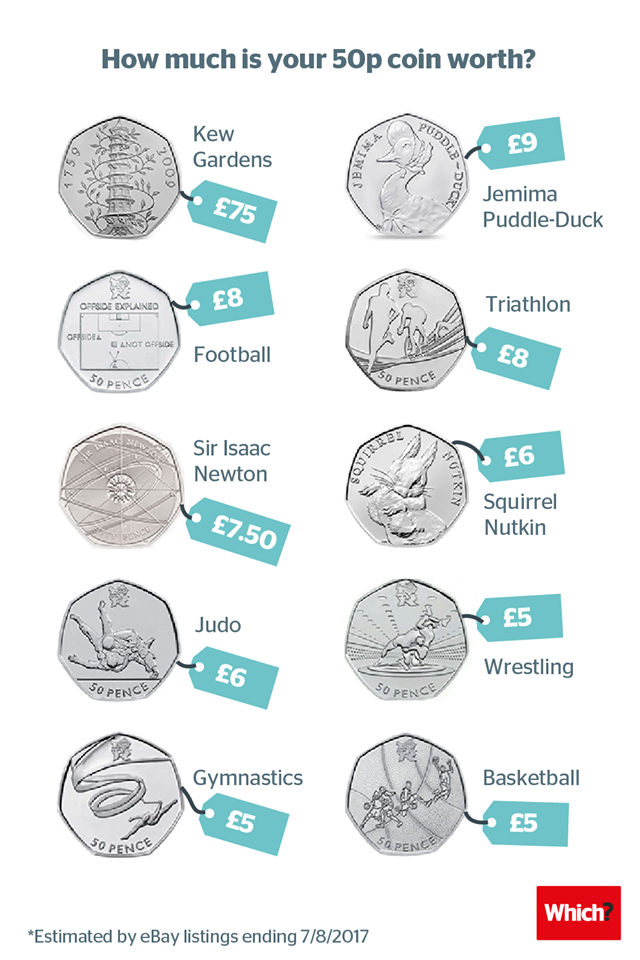