Some firms offer to help you get compensation for a delayed flight, but our research shows that you could be £216 per person better off, if you make your own claim.

In the three years since a 2014 Supreme Court ruling upheld your right to claim compensation if your flight’s delayed, claims-management companies (CMCs) have flooded the market, offering to handle claims against airlines.

All they ask for in return is a hefty slice of your compensation – up to 29%, plus VAT, with an additional admin fee in some cases.

For the longest delays on the longest routes, compensation adds up to €600 per person – that’s £550 at the current exchange rate.

How much can CMCs take?

Here’s the compensation you’d get on a £550 claim from some of the most prominent CMCs*: 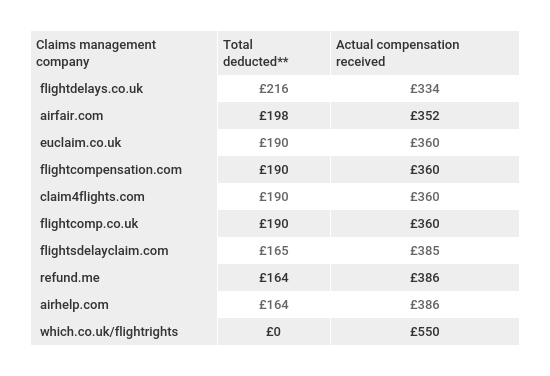 *The companies selected are the nine of the most popular CMC websites receiving traffic from organic and paid search in the 12 weeks leading up to 7 September 2017.

**Amount deducted includes VAT and, where applicable, additional fees. Some figures are rounded to the nearest pound. Exchange rate: £1 = €1.09.

Which? believes airlines should compensate passengers for delays and cancellations automatically. This will reduce the barriers in making a rightful compensation claim and by not doing so it opens up the market to CMC’s that take a hefty chunk out of compensation that’s rightfully yours.

Which? managing director of home services, Alex Neill, said: ‘The process for making a claim for a delayed or cancelled flight can be lengthy and time consuming, which is why some people turn to claims-management companies.

‘This is why airlines now need to agree to automatically compensate affected passengers, giving them the compensation they deserve.’

Until airlines introduce auto compensation, delayed passengers can use the free flight delay and cancellation compensation tool on the Which? website to find out what they are entitled to and create a formal claim letter.

The Denied Boarding Regulation applies to passengers departing from an airport within the EU, whatever the airline.

This means you’re entitled to claim compensation if your flight is cancelled or delayed by more than three hours.

There is an exception to the right to compensation, if the airline can prove that the delay or cancellation is caused by extraordinary circumstances that couldn’t have been avoided even if all reasonable measures had been taken.

Should I use a CMC?

CMCs can be used as a last resort if you’re struggling or if you don’t want the hassle of claiming yourself.

But if the airline refuses to compensate a CMC, it has no power to issue proceedings against the airline itself.

Many of these CMCs offer additional services as part of the fee such as instructing a solicitor on a no win, no fee basis if your initial claim is unsuccessful. But for the majority of delayed passengers these service aren’t required when making your initial claim.

If you do chose to use a CMC, it’s important that you read the terms and conditions carefully so that you know exactly what you’re agreeing to.

Make sure you’re clear on how much it will cost and what kind of service you can expect.