A new breed of audio is making waves in consumer tech. Smart speakers combine voice control and smart hub capabilities with a wireless speaker. And big name brands are battling it out.

At IFA 2017, Europe’s major consumer technology show, Sony, JBL and Harman Kardon released smart speakers. All use either Google Assistant or Alexa, the smart assistants found in the Google Home and Amazon Echo, respectively – but come with different designs intended to improve on sound or undercut on costs.

Since the sound quality from the Google Home and Amazon Echo has been found to be lacking, the race is on make the best-sounding smart speaker on the market. We revealed that the Google Home slumped to Don’t Buy status in our wireless speaker test. And competition from heavyweight rivals is on the horizon.

Apple, Sonos and Samsung smart speakers on their way

Apple’s highly anticipated HomePod is due to be released in December. This will use Siri – Apple’s own smart assistant that is also found in its iPhone – as the voice control aspect and will potentially incorporate its HomeKit smart hub functions. But the circa £300 price tag is supposedly justified due to its high-end speaker status, something that can only be put to the test once it arrives.

Read our expert HomePod review for our unique insight into what we expect to see from Apple.

Sonos is also working on a smart speaker that will likely incorporate Amazon’s Alexa. But it could go even further. While a launch event has been confirmed for October 4th with few details, some are anticipating that the Sonos’s speaker could accept commands from multiple voice platforms. Find out how other Sonos speakers fare in our tests.

Samsung-owned Harman Kardon showed off its smart speaker at IFA, but Samsung has one of its own being released soon, too. After the launch of its new Galaxy Note 8 smartphone last week, DJ Koh, head of Samsung’s mobile division, told CNBC News: ‘I am already working on it.’

It isn’t yet known when the device might arrive or which voice platform it will use, but Samsung’s recently developed Bixby voice-assistant is a highly probable candidate.

Browse all our wireless and Bluetooth speaker reviews.

Sony has beaten them all to the punch. Its new LF-S50G incorporates Google Assistant and is said to have superior sound. Arriving in the UK in November, it will cost approximately £200, which is £70 more than the Google Home’s RRP.

As well as supposedly better sound quality, the Sony smart speaker is splashproof and has a clock display. Its cylindrical shape follows the current trend designed to deliver sound in all directions.

We’ve tested many Sony speakers over the years and have found quality to be mixed. Take a look at all our Sony speaker reviews to see how individual models fare in our tests.

Another big brand rival and one that promises better sound quality, the SC-GA10 integrates Google Assistant much like Sony. But it ditches the cylindrical design in favour of taking an oblong shape, bringing a more traditional edge to this smart speaker. It’s also a touch bigger than most, potentially hinting at a more powerful sound.

The Panasonic SC-GA10 will go on sale in early 2018 but a price is yet to be confirmed. In the meantime, see what we make of Panasonic speakers audio tests in our expert reviews.

Also announced this week at IFA, Harman Kardon is another audio specialist getting in on the act. The Allure is an Alexa smart speaker with 360-degree sound design and ambient lighting.

At a hefty £250, this new Harman Kardon speaker will certainly have to sound better than the Echo – lights alone will not be enough to warrant spending £100 more. Once it arrives in shops in the winter, we’ll put it through its paces in the Which? Test Lab. 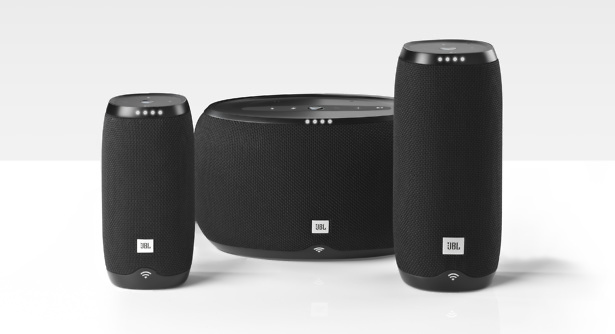 JBL, another Samsung-owned audio brand, has incorporated Google Home into a new series of smart speakers. The Link 10 (£150) and Link 20 (£180) match JBL’s expertise with rugged portable wireless speakers that pack a smart assistant. But with just five and 10 hours of battery respectively, it seems as though the added smart functionality is coming at the cost of longevity.

The Link 300 is a bigger wireless speaker, intended to deliver a more powerful sound for use at home. But at £250, it will face tough competition from the Harman Kardon Allure and the slightly more expensive Apple HomePod.

With smart speakers seemingly getting more expensive, Anker – a brand typically only found on Amazon in the UK – has taken a different tack. The Zolo Mojo brings Google Assistant to a small wireless speaker costing just $70 (UK pricing not yet confirmed).

With just a 5W speaker it’s certainly not as powerful as most, but offers voice-controlled smart hub capabilities on a budget. It’s due to be released in late October, but whether it can compete with high-calibre rivals is yet to be seen.

It’s also worth noting that the Echo Dot – a condensed version of the Amazon Echo with all the smart capabilities but no speaker – costs just £50. This can turn any hi-fi or speaker with a 3.5mm input into a smart speaker. Read our expert Amazon Echo Dot review to see how it fared in our smart hub tests.