Eye-catching bargains and discounts hit your inbox all the time, but it pays to double-check what you’re really getting. This week, we’ve spotted a Wowcher email promo for a cut-price MacBook that you’re best off ignoring.

Apple MacBooks, put simply, aren’t cheap. So, we were surprised to see a £179 13-inch MacBook being sold by a company called Megamax Marketing UK, with the deal being shared by Wowcher in its email round-ups. According to Wowcher’s promotional copy, this is a discount from £449 or, somewhat inconsistently, £545.

A delve into the specs, however, shows how it pays to pause before snapping up a cut-price laptop. For one thing, this model was first released over a decade ago.

Find a real bargain with the Which? top choice laptop of the month 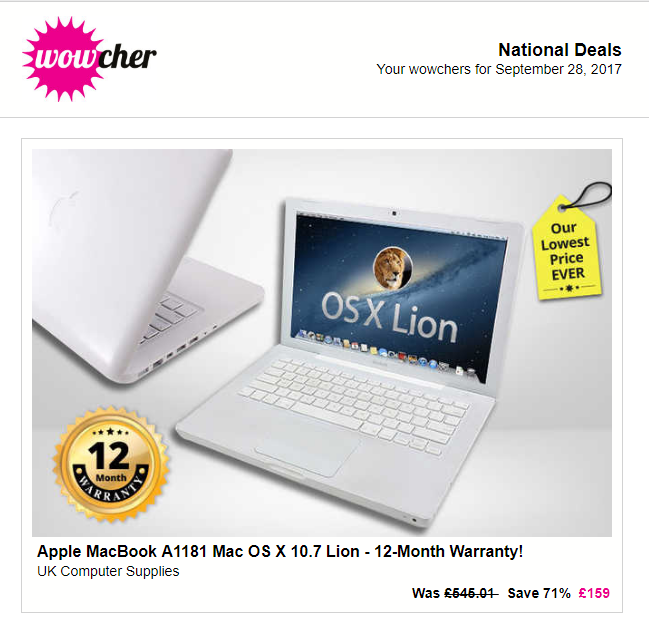 Wowcher MacBook – over 10 years old, and it shows

The MacBook model Wowcher is promoting was first released in 2006. There have been huge advances in laptop technology since then, with Apple at the forefront of plenty of them.

This promoted laptop is heavier, slower and has a less detailed screen than you’d get on a modern MacBook. Worse, you’ll be stuck on a version of the Mac OS X operating system that was surpassed in 2012: OS X Lion. It won’t upgrade to newer versions of Apple’s operating system, leaving you well behind the times in terms of software.

Wowcher describes the model as ‘sleek and speedy’. But, if you were hoping for a super-slim laptop to show off in a trendy café, you’re likely to be disappointed. This is nothing like the MacBook Air or MacBook Pro models in Apple’s current ranges.

MacBook claims that don’t stack up

The venerable age of this MacBook hasn’t stopped Wowcher from using some pretty effusive marketing copy to push the ‘deal’.

We say: By today’s standards, this processor could never be called powerful, and 4GB of RAM is half what you’d get in even the entry-level MacBooks in Apple’s 2017 range.

We say: This type of connection has been surpassed twice over: first by USB 3.0 (the same fit, but faster data transfer speeds), then by USB-C (a different fit, but faster still).

We say: One to watch out for. If you delve into the fine detail on Wowcher’s site and you’ll learn that Grade C means a ‘Working product in average cosmetic condition. May have very noticeable scratches and show wear and tear.’

Buy the right Mac for you

Joining the Mac family isn’t cheap, and a genuine knockout bargain is hard to come by. But you can find discounts on current-generation models, or perfectly respectable 2016 or even 2015 MacBooks.

The range of MacBooks on offer is fairly diverse, and the prices can be intimidating. You can pay around £2,000 for a top-of-the-line MacBook Pro with TouchBar.

The cheapest Mac you can buy from high street retailers such as Currys, John Lewis or Apple’s own store is the 13-inch 2017 MacBook Air, currently £879. It’s possible that this could be discounted further when Black Friday hits, so keep an eye out for sale periods.

Which MacBook should I buy? – learn your Airs from your Pros