Harman Kardon has joined forces with Microsoft in an attempt to lay claim to the hotly-contested title of best smart speaker.

The Invoke is the first smart speaker to use Microsoft’s voice assistant, Cortana, and Harman Kardon will be hoping it enjoys the same success as the Amazon Echo.

Although the Invoke can control smart tech, Harman Kardon has put more focus on its speaker credentials, going as far as to say that the Invoke offers ‘unparalleled sound’. That could be a good tactic, as our research has found that most people use devices such as the Google Home and Amazon Echo to listen to music.

There’s fierce competition, though. Amazon has updated its Echo line with two new hubs that have improved sound quality, Google is releasing the Home Max, which puts music to the fore, and Apple is releasing its HomePod smart speaker in December.

Harman Kardon has done well to get out of the way of Apple, but it’s still up against the second generation Echo and Echo Plus, which launched in October. Does the Invoke have what it takes to stand out, or is Cortana too late to the party?

Everything you need to know about the Harman Kardon Invoke

The Invoke is a voice-controlled speaker first and foremost. The built-in assistant is Microsoft’s Cortana, which is named after a character in the Halo game franchise if you’re curious.

It’s available now in the US for $199 (£150), which puts it between the £89 second-generation Echo and the $349 (£300) HomePod. We don’t know when it will make its way to the UK, but Microsoft shouldn’t let Amazon, Google and Apple get too much of a head start in this second round of the smart speaker scrap.

The most common request that’s sent Cortana’s way is likely to be to play music, but that’s not the sum-total of what the Invoke and Cortana are capable of. Cortana can search the internet, add things to your to-do list and set reminders. It can also control a range of smart tech from top brands, including Nest, Philips and SmartThings.

The built-in speaker means you can make calls, too, but only using Skype for the moment. 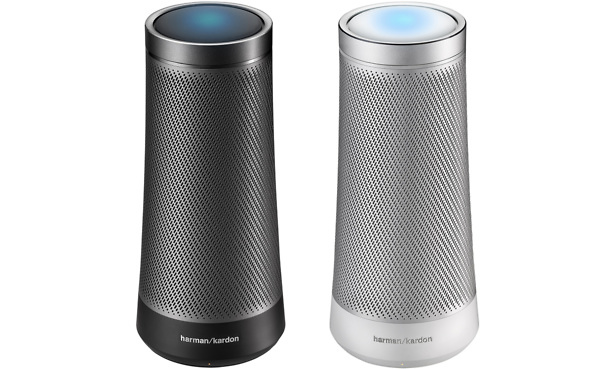 Will its sound quality justify the price?

Amazon and Google are both emphasising the sound quality of their latest hubs, but Harman Kardon has decades of audio experience on its side. The Invoke has six individually-driven speakers, which is four more than the second-generation Echo. Three 1.75-inch mid-range speakers and three 0.5-inch tweeters fill the metal cylinder and they’re placed facing outward to deliver 360-degree sound.

Unlike the Echo, there’s no woofer for bass, but there’s a passive radiator to compensate. Whether this does enough to make up for the lack of a woofer is something we’ll investigate as soon as we get the device in for testing.

If the extra speakers give the Invoke true room-filling sound then it may be worth the extra £100 over an Echo, but the risk is that the middle ground the Invoke occupies doesn’t prove popular. People who want the best sound may be happy to fork out for an Apple HomePod or Google Home Max, while anyone after a virtual-assistant may opt to spend less on an Amazon Echo.

You can see what we thought of the original Echo’s sound quality in our Amazon Echo wireless speaker review.

Is there anything holding the Invoke back?

Currently, the Invoke only works with Microsoft services, so if you want to check your Google calendar then you’re out of luck. When it’s competition works with a variety of accounts from different companies, this could prove to be the Invoke’s biggest pitfall.

There’s no multiple-account support either. Both the Echo and the Google Home can recognise different voices and attribute their requests to specific accounts. That means one family member asking ‘What’s in the diary for today?’ would get a different response to another family member asking the same question.

It’s possible that the Invoke will get these features – the Echo didn’t have multiple accounts at launch – and it may even get them by the time the Invoke makes it to the UK. But, in a market this competitive, these are the missing features that could lead to people choosing one of its rivals.