Chinese brand Huawei has announced two new high-end smartphones – the Mate 10 and Mate 10 Pro – to compete with flagship mobile phones from the likes of Apple and Samsung.

Huawei is a force to be reckoned with in the mobile phones arena. Indeed, it sold more smartphones than Apple this summer. This made it the second-best-selling smartphone brand globally during this period, behind Samsung.

With the new Mate 10 and Mate 10 Pro, the Chinese brand is trying to bring something different to the competition. Most notably, they’re both powered by the all-new Kirin 970 processor. This means very little to most of us, but Huawei says it means each phone features Artificial Intelligence (AI) enhancements and machine learning, for a better mobile experience.

We explore these claims and whether we think they’re anything to care about, below. Plus, we look at these phones’ specs for camera, battery life and more – to help you decide whether they’re ones to keep your eye on.

Mobile phone reviews – if you’re looking to buy a new phone right now, consult our reviews of all the important models

Are the Mate 10 and Mate 10 Pro the smartest phones?

As mentioned above, both the Mate 10 and Mate 10 Pro are powered by the Kirin 970 processor. This is the not-so-imaginatively-named successor to the Kirin 960.

Huawei says it’s the world’s first AI processor for smartphones, with a dedicated Neural Network Processing Unit (NPU). Huawei says that among other things, this allows the phones’ cameras to recognise over 100 million objects – you should then be able to press a button which will enhance the image in the best possible way.

Frankly, this all seems like marketing waffle at the moment. We’ll be sending the Mate 10 and Mate 10 Pro to our lab as soon as possible, to find out whether they’re faster than their Mate 9 predecessor, and for a hands-on verdict of some of the new features.

What about the cameras themselves?

With all the talk of ‘intelligent photography’, it can be all too easy to overlook the camera hardware on these two new phones.

The Mate 10 and Mate 10 Pro have the same camera set-up. They feature dual rear cameras – while one is a 12Mp colour lens, the other is a 20Mp monochrome one. The theory is that this will help bring out colours and detail better, especially in low light.

Huawei has added optical image stabilisation to the colour lens, too – so you should be able to take blur-free photos even when you’re on the move.

This isn’t an innovation – previous Huawei phones have had this. To find out whether we’ve been impressed by this camera set-up, head to our reviews of the Huawei Honor 9 and Huawei P10.

The Huawei Mate 10 has a very large 5.9-inch 2K display. You have four colours to choose from: mocha brown, champagne gold, pink gold and black.

The Mate 10 Pro has an even larger six-inch OLED display. However, it might be more comfortable to use with one hand than the Mate 10 – its aspect ratio is 18:9, meaning it’s twice as long as it is wide, so you won’t need to stretch your hand as much to reach the corners. 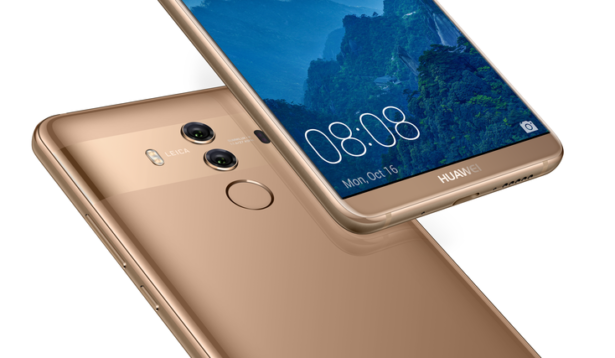 The 10 Pro has very small bezels surrounding the display, giving it both an expansive and expensive look. We think it looks quite similar to the LG G6, also launched this year.

Both phones have a curved glass back. This usually means a phone supports wireless charging, so we’re slightly disappointed that neither the Mate 10 nor Mate 10 Pro does.

The Mate 10 has a traditional headphone socket, whereas the Mate 10 Pro doesn’t – instead, you need to use USB-C headphones, or buy an adaptor. Because of this, the Mate 10 Pro is water-resistant with an IP67 rating – this means it should survive a half-hour dip in one metre of water. Whereas the cheaper Mate 10 is best kept away from sinks.

What else do I need to know?

The Mate 10 comes with a generous 64GB of on-board storage. If you want a bit more space to play with, you can buy and insert a separate micro-SD card. The Mate 10 Pro, on the other hand, comes with a whopping 128GB – but you won’t be able to boost it.

Both phones will run on the very latest version of Google’s operating system – Android Oreo. And they both support two Sim cards – which means you can use more than one number on the same device simultaneously.

If you’re tempted to buy these phones, take a look at our Huawei mobile phone reviews to find out whether it’s a brand really worth considering.