Drivers of older petrol and diesel cars will now be charged £21.50 to drive into the centre of London.

The T-charge (also known as the Toxicity charge or Emissions Surcharge) came into force as part of the drive to tackle poor air quality.

It operates in the same areas as the existing congestion charge zones, and drivers of older vehicles that do not meet the Euro 4 emission standards from 2006 will be charged an extra £10 on top of the £11.50 congestion charge fee to drive in London.

It is estimated that up to 34,000 drivers a month will have to pay this extra charge.

All cars officially comply with emission standards. But if they were all clean, there would be no need for this crackdown.

In our realistic car tests, we’ve found vehicles, including some hybrids, that spew out high levels of toxic gases. Find out which are the cleanest and dirtiest carmakers.

T-charge – will it affect me?

It will only affect cars that do not meet the Euro 4 emission standard which came into force in January 2006. All new cars sold after that point should not be subject to the extra charge.

The T-charge operates in the same area as the existing congestion charge zone, and within the same hours: 7:00 to 18:00, Monday to Friday. So if you’re driving through London at any other time, the charge will not apply.

How can I check if my car will be charged?

The easiest way is to check your car online. TFL has a dedicated service that allows you to check whether your car meets Euro 4 or not.

Alternatively, you could use the Gov.uk’s vehicle enquiry service to find out what Euro emission limit your car meets.

Or, if you have your paperwork handy, owners of newer vehicles can find it printed on their vehicle registration document (V5C document).

The modern emission laws as we know them today came into force for all new cars as of January 1993, and was then called Euro 1.

Using the same official tests that were used to measure fuel economy (mpg), the levels of CO (carbon monoxide), HC (hydrocarbons), NOx (oxides of nitrogen) and PM (particulate matter) were recorded. If the car produced more than the limits specified by Euro 1, the car could not be sold in the UK.

Then in January 1997, Euro 1 was replaced with Euro 2, which introduced progressively tougher limits.  In turn, this was superseded by Euro 3 in January 2001, Euro 4 in January 2006 and so on. We are currently on Euro 6, which became mandatory as of September 2015. 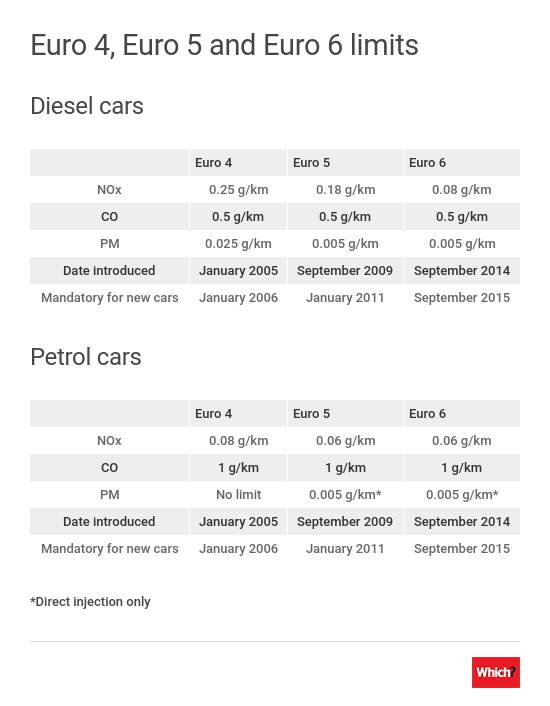 T-charge will not last

The Toxicity charge will be scrapped as early as April 2019, when a new, 24-hour ULEV (Ultra-Low Emission Zone) comes into force.

Once the ULEV comes into affect, owners of petrol cars that don’t meet Euro 4 or better will have to pay £12.50 on top of the existing congestion charge (£11.50), so drivers of old petrol cars will pay £24 to enter the ULEZ.

However, diesel car owners will have to have a car that meets Euro 6 (currently the latest limit, came into force in September 2015) to escape paying the extra £12.50. By 2019, diesel cars over four years may be liable to pay £24 to enter the ULEZ.

Which? uses its own fuel economy and emission tests – and we will not recommend a car if we find it produces large amount of emissions in our tests. To find your next, new, clean car, head for our best cars of 2017.