If you have a stash of paper tenners, it’s time to dig them out – the Bank of England has announced these notes will cease being legal tender on 1 March.

The paper-based £10 note will be withdrawn, to be replaced by the polymer design featuring Jane Austen which was launched earlier this year.

Find out what the changeover means for your notes and what will happen to old tenners.

The paper-design, which features evolution theorist Charles Darwin, will cease to be legal tender – meaning you can no longer use it to pay for goods or services.

But don’t go on a spending spree just yet. After the cut-off, it’s likely banks and post offices may still accept the out-dated notes for a limited time.

Indeed, after the paper-based fiver was withdrawn in May, most banks allowed their customers to deposit old notes directly into their accounts or swap them for new ones.

The Bank of England will also continue to exchange withdrawn notes for legal tender free of charge, no matter how old the note, under their currency guarantee.

As of October 2017, around 55% of the £10 notes in circulation were polymer. Over coming months, the 359 million paper-based tenners still in the market will be gradually rolled back, the Bank of England confirmed.

The paper-style note, which was first launched in November 2000, is being replaced by a hard-wearing plastic version featuring beloved author Jane Austen.

The polymer note was released to the public on 14 September. Among other counterfeiting measures, it features micro-lettering, colour-changing designs, a see-through window and a hologram which changes from ‘ten’ to ‘pounds’.

Like other polymer designs, it is impossible to rip and water-resistant.

Over recent years, the Bank of England has been rolling out polymer notes to replace the less secure, easily-damaged paper versions. The paper £5 note featuring Elizabeth Fry ceased being legal tender on 5 May 2017, and a new £20 polymer note is due to be released in 2020.

At this stage, the Bank of England has not confirmed whether the £50 will also be updated. 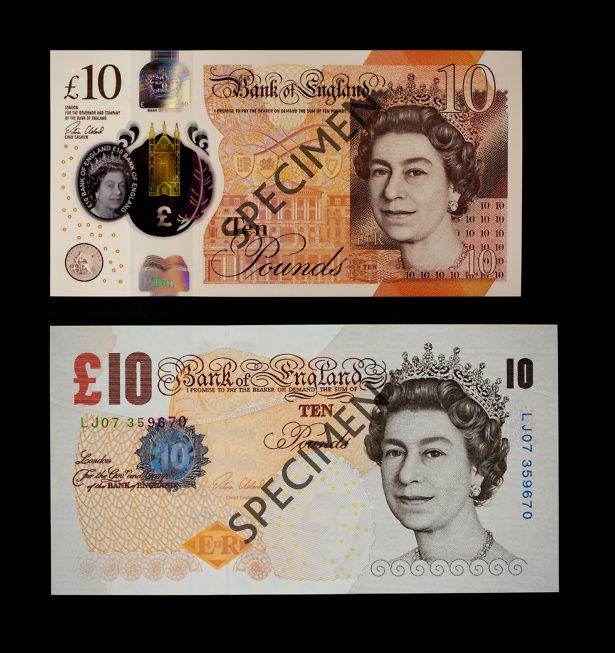 Are my paper-based tenners valuable?

It’s quite rare to find a banknote that is considered a collector’s item – but in some cases, a note may fetch a premium price.

Many collectors seek out rare serial numbers which indicate that a note is among the first of its print run – for example, AA000200 or lower.

Unusual serial numbers featuring patterns can also be sought-after, for example, 123456 or 888888, especially if the numbers are considered ‘lucky.’

But generally collectors will expect notes to be in mint condition. So unless your note is incredibly rare, it’s unlikely to attract much interest if it’s torn, stained or creased.