Roku has revealed two new internet TV streamers that are part of a completely new product line-up. The Streaming Stick+ is a premium option that offers 4K content, while the Express set-top box, at less than half the price, serves as a direct replacement for the older Roku models.

Nearly 10 years old now, Roku is one of the most established names in the world of streaming. That said, its product line-up was well due an overhaul. With the names getting a little confusing and the differences between its products a little unclear to the average shopper, it has decided to update the Roku 2, Roku 3 and Roku Streaming Stick – replacing them with just two distinct models.

They’re available to buy online now across the UK, with more brick-and-mortar retailers adding them to their inventory as time passes. If you’re looking for a way to smarten up your TV-viewing experience this Black Friday, or even for Christmas, these two streamers will almost certainly be worth considering.

We’ll have full reviews from our lab before the end of the month but, for now, here’s a look at what we can expect to see from them.

2017 will go down as the year that 4K truly entered the mainstream. We’ve recently seen Amazon and Apple update their TV box line-ups with 4K-capable models, while Google lead the charge a whole year ago – so it comes as little surprise that Roku has finally caught up with its own range.

4K is undeniably the biggest selling point of the Streaming Stick+, the first Roku model to ever do so. What’s equally appealing, though, is just how discreet it is. Much like the Amazon Fire TV Stick, it’s no larger than a standard USB pen drive, while packing in a whole host of features. You simply slide it in to one of your TV’s HDMI ports, connect it to one of your TV’s USB ports to provide power, and you’re up and running.

Take note, though – there’s no Ethernet port here, as the Streaming Stick+ can only connect to the internet via wi-fi. There is an ‘advanced wireless receiver’ built in to the USB power cable though, designed to give a big boost to its range and signal strength, so hopefully even those with weak wi-fi will be able to hold a smooth connection.

The accompanying remote has undergone a slight change, too. It looks as if voice control has actually been removed from it, after being introduced only two years ago on the Roku 3. As for why, we couldn’t say. You’ll have to do your browsing the old fashioned way.

The headphone jack has also been removed. On older Roku models this allowed for the sound to be played straight through the remote, leaving the TV silent for more discreet viewing. Instead, this feature has been shifted to the Roku app – use your iOS or Android smartphone as the remote instead and you get this feature back. You can also cast from your smartphone to the Streaming Stick+ itself, whether you’re on Android or iOS.

While the product may be all-new, we expect the interface on-screen to have changed very little. It should still be that intuitive, clean and very purple Roku interface anyone who’s ever used one of its streamers should be familiar with. It will have the same massive library of apps and players, including both Amazon Prime Video and Netflix (but now with all the exciting new 4K content available, of course).

To read more about the Roku Streaming Stick+ click the link to see our full preview. 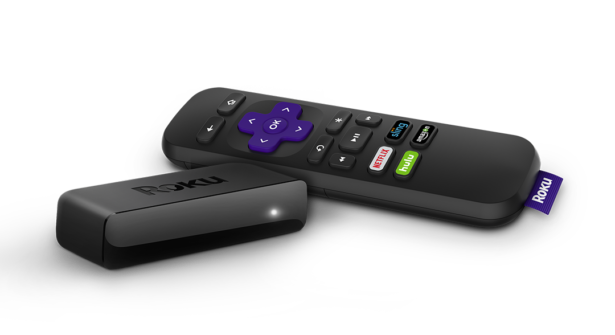 It’s a little bit less exciting than its flashier 4K sibling, but you can forgive its demureness with one look at the price. This is an extremely competitively priced streamer, and one that’s sure to merit consideration from anyone not currently in possession of a 4K TV.

In a way the Roku Express replaces all three of Roku’s old devices, cramming almost all of their functionality in to one supremely compact set-top box. It may sit atop your TV, but the Express is no larger than a Mars Bar – that means input and output options are limited. There’s a micro USB port for power and an HDMI port for sounds and visuals, and that’s it. It can only connect to the internet via wi-fi and fans of high-quality audio will be disappointed that they can’t output its sound through a higher fidelity choice of cable. There’s also no built-in storage, nor is there any way to play movies saved on another storage device through it.

While the lack of 4K is the main difference between the Express and the Streaming Stick+ there’s also a couple of other subtle differences. The Express’ USB power lead doesn’t have the advanced wireless receiver, meaning you’ll have to hope that your wi-fi is strong enough to reach the box without it. Then there’s the fact that its remote is infra-red, rather than ‘point anywhere’. With the Streaming Stick+ you can, as the name suggests, point its remote anywhere and still get a response out of the device. With the Express it has to be pointed at the box like a conventional, old fashioned remote – hardly a deal breaker but something to bear in mind.

The apps and players available are still the same, though, as is the functionality of the rest of the remote (plus the app, should you choose to use it). Bearing in mind that the Roku 3 was almost three times as expensive as this when it launched, this could be a very tempting offering from Roku – if it scores well enough in our test lab.

To read more about the Roku Express click the link to see our full preview.