A new study shows that VR headsets are selling better than ever before, with quarterly sales exceeding 1m for the first time in Q3 of 2017.

It’s been a big year for virtual reality, with a growing number of big-name brands backing the platform that’s transforming living rooms across the country.

Keep scrolling to see which headsets are flying off the shelves, and to see how you can try VR yourself for less than £20.

Sony is dominating the VR market

Virtual reality – or VR for short – is a technology that lets you explore virtual worlds using a headset.

The latest figures from market analyst film Canalys show that Sony’s PlayStation VR (PSVR) made up almost half (49%) of the total sales during Q3 of 2017. That’s a considerable chunk, especially as the brand in second place, Oculus, was responsible for just 21%. 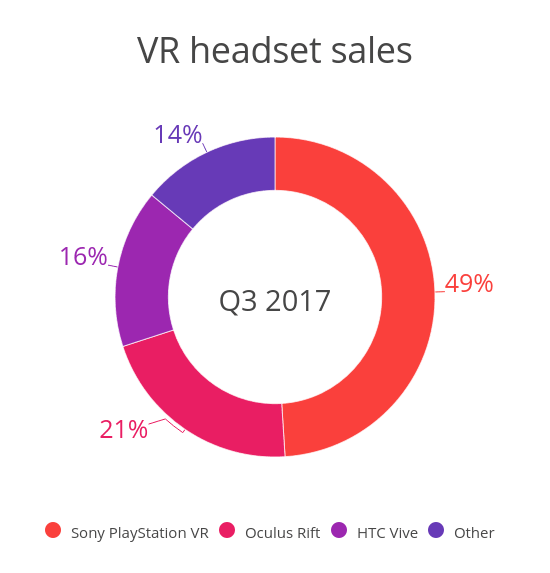 As you can see, Sony has sold far more VR headsets than Oculus (21%) and HTC (16%). But that isn’t much of a surprise, seeing as Sony’s PSVR system is widely available, often being bundled with games.

At the same time, it’s more capable than smartphone headsets and is cheaper than headsets that are designed for PCs. Computer-compatible VR headsets are generally trickier to configure and only run on high-end PCs.

As Christmas edges closer, we expect to see some price drops. But these options may still be a little on the expensive side if you’re a newbie. Keep scrolling to see how you can try VR for far less.

If you’ve already tried VR, or are thinking of giving it a go, let us know your thoughts by joining the conversation.

Virtual reality on iPhone and Android: how to get started

If you want to experience VR for yourself without spending big, mobile VR is the way to go. In fact, a virtual reality headset could make for a great stocking filler this Christmas. All you need is a headset and a VR app – there are thousands of free options for both iPhone and Android smartphones. Get started in three quick steps: 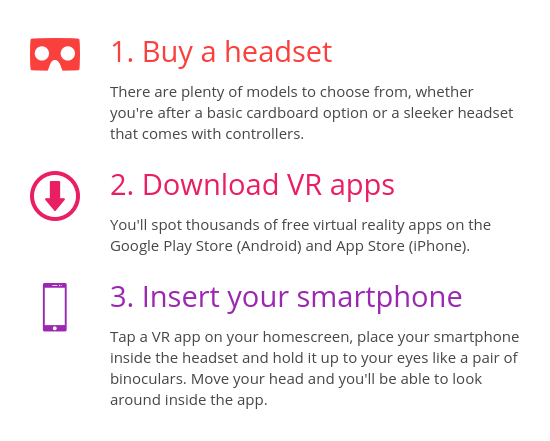 We’ve recently had our hands on some of the most popular mobile headsets around, with the full list including the basic Google Cardboard (£15) and the sleek-looking Google Daydream View (£99), which comes bundled with a wireless controller. Head over to our virtual reality headset reviews page to see our full range of first looks.

With so many different virtual reality headsets and interactive experiences on offer, now is a great time to get involved. See our guide on How to try VR for free on iPhone and Android for more details.