At CES 2017 it was the Faraday Future FF91 that was the talk of the show, but this year the Byton Concept is vying to be the car everyone wants to take for a spin or, in this case, watch a film in.

At a confident press conference in Las Vegas, Byton unveiled its first car, called the Concept – for now at least.

It’s an electric SUV that looks halfway between a Jaguar F-Pace and a Range Rover Evoque, but has a few futuristic trimmings that mark this car as something a bit different to the vehicles parked in your average suburb. For a start, there are no door handles and it has some fancy lighting on the bonnet and rear.

It’s an attractive car, but what is it that’s going on inside that could make this car special? Byton calls the interior a ‘digital lounge experience’. We spend up to 90 minutes a day in a car, according to Byton, and it wants to improve that experience and ‘turn miles into smiles’.

Henrik Wenders, Byton’s vice president of marketing, said: ‘It’s not about refining cars: it’s about refining life’. Is Byton’s first bite of the cherry going to change people lives and, more importantly, will this relatively affordable motor ($45,000) be a practical electric car that people will buy?

Best electric cars – the Concept is two years away, so take a look at the models we recommend today.

It’s still got four seats and a steering wheel, but this one has a touchscreen in it – and that’s not even the most eye-catching feature. No, that honour goes to the screen fitted into the dashboard. At 125cm by 25cm, the enormous touchscreen is the dashboard. 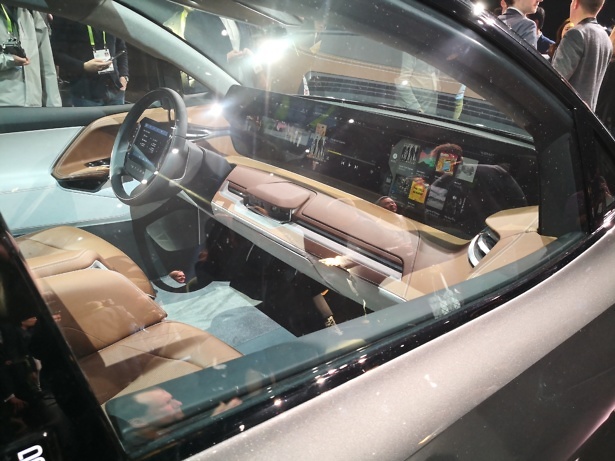 It can display everything from maps to movies. The latter doesn’t exactly sound safe, but it speaks to Byton’s autonomous ambitions. The Concept is ready for autonomous driving, although it remains to be seen whether watching Mad Max on the gargantuan screen while you’re doing 70 down the M1 will be legal.

You can control the screen, which can even display your health stats, by touch, gestures or your voice, courtesy of Amazon’s Alexa.

There’s facial recognition, too. When you get in, the car recognises who’s driving and adjusts the seats. The front seats can even turn 90 degrees to face each other, although this will be only be useful when the car can drive itself.

Is it a practical car?

A metre-long touchscreen dashboard is a headline grabber, but the Concept is a car not a living room. It needs to drive well and, since it’s an electric car, it needs to have a range that means you don’t need to live in a city with plenty of charging points.

There are two versions of the Concept – one with a 250-mile range and one with 325. That’s close to a Tesla Model X, the current king of the hill for electric car range.

More impressive than the range is how quickly it charges. Byton says you’ll get 150 miles from just 20 minutes of charging and that the battery will be 80% full after 30 minutes.

Byton didn’t tell us whether you’ll get that sort of speed from a home charging point, or one of the various charging points from different brands available in the UK. It’s possible that Byton will introduce its own fast-charging points in the same way as Tesla.

How much is it and when can you buy it?

It may be called the Concept, but Byton’s maiden car isn’t too far away. The company is aiming to get the car to market by the end of 2019. You’d expect it to be expensive, too, but prices start at $45,000 (the current equivalent of £33,182). That’s the same as a Tesla Model 3, although this is a larger car and SUVs generally cost more than saloons.