Philips Hue smart light bulbs will soon be able to react to the films you’re watching and the songs you’re listening to, to create a more immersive experience.

A software update to Philips Hue bulbs, as well as a new app called Philips Hue Sync, will unlock the new features of the existing range of bulbs.

The updates mean Philips Hue bulbs will react to what’s on the screen. If you’re watching Waterworld, for example, your bulbs will give an oceanic blue, while a trip through the desert with Mad Max will see the bulbs glow orange.

Philips will also be releasing bespoke lighting arrangements for certain films later in the year. These crafted routines will be more precise than the typical light show that reacts to general colours on screen.

The bulbs will synchronise with music and change the lights appropriately. If you’re listening to Nothing Compares 2 U, your bulbs will emit a sombre blue, but something more upbeat will give you a livelier colour. The lights will also be able to react to songs played on music-streaming services in the future.

The software update rolled out in December so, once the new Philips Hue Sync app is available, anyone with a Philips Hue v2 bridge and colour-changing bulbs will be able to start watching films and listening to music with an added lightshow.

A separate update to the Philips Hue app will also let you group the bulbs in your home, making it easier to control certain bulbs together, and access your most used light temperature and colour combinations – or ‘scenes’.

What is Philips Hue Sync?

This new app will be available to download on Windows 10 PCs, and Macs running MacOS Sierra. Once downloaded it will create lightscapes for any film you watch, or song you listen to, through the computer.

Philips Hue Sync and the updated Philips Hue app will both be available from the second quarter of this year.

Gamers with Razer Chroma kit, including keyboards and mice, can already enjoy new light routines while they are playing games.

Philips hopes to partner with more companies in the future to make the bulbs compatible with more apps and services. To aid in this endeavour, Philips has released developer tools. This could lead to the bulbs being able to react to shows on Netflix, Amazon Prime Video and others. 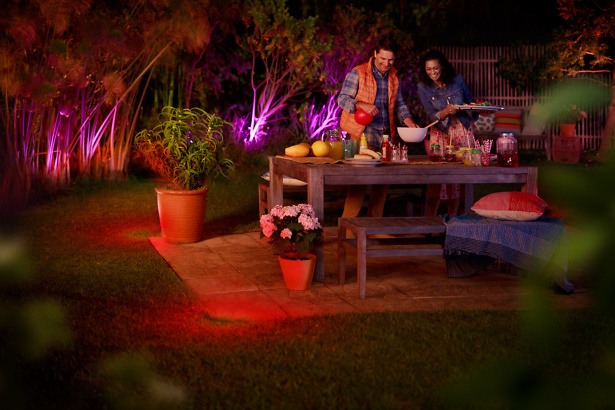 Philips Hue is moving outdoors later this year with a new range of bulbs. They will operate in the same way as the indoor bulbs, so you’ll be able to control them remotely and set the colour temperature and brightness.

They will be wi-fi enabled, but we don’t yet know whether Philips has a plan to ensure weaker signals can reach into people’s gardens.