You may only just be getting used to televisions with 4K picture quality but the next generation, 8K, is about to launch, including new sets from TV giant Samsung.

An 8K TV is designed to show TV pictures that are sharper, crisper and more realistic than ever before. However, there’s practically nothing to watch in 8K right now and you’ll need deep pockets to afford an 8K model.

TV reviews – see in-depth verdicts of all the latest TVs, including HD and 4K models.

At the CES tech conference in Las Vegas, Samsung confirmed that it will make its first foray into 8K TVs, with top-end QLED 8K sets scheduled for launch in 2018. Watch our video below to see what was announced.

These TVs are capable of displaying 8K pictures, but that isn’t the end of the eye-popping specs. They have a peak brightness level four times higher than previous top-of-the-range Samsung sets. And Samsung claims that this comes with no sigificant increase in power usage, too.

With such a bump in light output, the 8K TVs have tech to ensure black areas stay black, and the contrast level is where it should be. As with other Samsung premium sets, the new QLED 8K models support what’s called HDR 10+, for content with brighter whites and deeper blacks. We’ll know for sure if all this works when we test Samsung’s 8K QLED TVs.

Other key features include easier set-up of wi-fi and integration of Samsung’s Bixby voice assistant, which works a bit like Amazon’s Alexa and Google Assistant.

Very little right now. There isn’t much 4K content to watch, and even less in 8K. The BBC has done some trial broadcasts in 8K in the past but, realistically, it will be a long time until you’re sitting down to watch your evening viewing in 8K quality.

Samsung is instead selling its 8K TVs on the basis that they can upscale – in other words, upgrade – other content to near-8K quality.

The TV detects material below 4K quality and uses picture-processing technology to sharpen edges, reduce digital distortion and add extra detail to make the picture look better. This includes even low-resolution, standard-definition TV pictures you might watch on Freeview or Sky.

Samsung 8K QLED TVs will launch in the second half of 2018 in large sizes, including 65-inch, 75-inch and a whopping 85-inch. We don’t yet have pricing, but expect them to be expensive.

But what if an 85-inch TV is just too small for me? 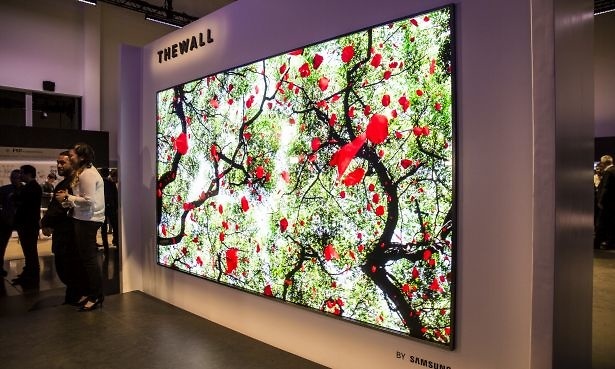 Although it will go on sale, this monster television is less a consumer product than it is a demonstration of where TVs might go in the future. It has two key innovations.

The first is that it uses much smaller LEDs than current ones, and they’re also self-emitting, so they emit their own source of light similarly to an OLED TV. This means the TV doesn’t need a backlight and so can be thinner than conventional LED TVs.

Secondly, the TV is modular in the sense that it’s made up of component sections of screen that can be assembled to whatever size the buyer wants. This doesn’t necessarily bring great benefits to the user, but could open up new ways for Samsung to manufacture and sell a television in future.