Apple could have been more forthcoming about slowing down older iPhones via a software update, says Which?.

The American company admitted to slowing down older iPhones towards the end of December 2017, saying that the move was to prevent unexpected shutdown and prolong the life of the phones when the battery was aged.

January 2017’s iOS 10.2.1 software update included a feature that meant the iPhone 6, 6 Plus, 6s, 6s Plus and SE would slow down when a lot was being demanded of them and when the battery was showing signs of age. The feature has also been rolled out to the iPhone 7 and 7 Plus. Apple says that performance will return to normal if you replace the aged battery.

But Apple’s statement only came in response to research conducted by Primate Labs, which runs the Geekbench processor benchmarking software – often used to test how quickly a phone operates and what it’s capable of. For more information on the initial unfurling of events, read Apple admits to slowing down older iPhones.

Whether slowing down iPhones to help combat ageing battery issues and prolong life is a good idea or not, we think Apple could have been more open with its customers about what the software update entailed at the point of upgrade.

Alex Neill, Which? managing director of home products and services, said: ‘Apple’s lack of transparency during this controversial software update is completely unacceptable. Consumers deserve to know if the performance of products they have purchased will be compromised by future updates.

‘Any change that impacts the speed of a device should be communicated in advance and clearly, so that consumers are fully aware and can make informed decisions.’

Apple’s move has prompted some fury from its customers. Indeed, Apple is facing class action lawsuits in America and Israel. Allegations include that Apple slowed the phones without users’ consent and that claimants would have opted to replace their phone batteries, rather than buying a new phone, if they had been informed by Apple that a battery replacement would have improved performance.

Mobile phone reviews – find the best for your budget

What did Apple tell its customers about iOS 10.2.1 at the point of upgrade?

The below image is a screenshot of how the iOS 10.2.1 update was presented to Apple device owners, taken by Amit Chowdhry for Forbes: 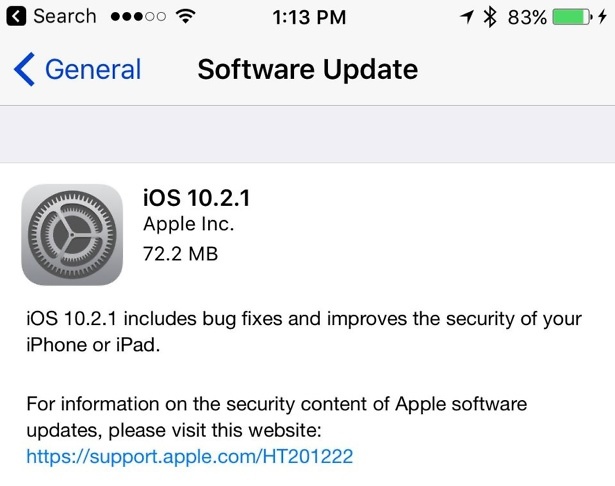 It states: ‘iOS 10.2.1 includes bug fixes and improves the security of your iPhone or iPad.’ It also includes a link to a webpage for more information on the security element of the software update, but nothing on slowing down older iPhones.

Interestingly, Apple did delve into more detail about the software upgrade online – but on a separate page than the one linked to in the image above. Under the iOS 10.2.1 section on the company’s information page for iOS 10.0 – iOS 10.3.3, it says: ‘It also improves power management during peak workloads to avoid unexpected shutdowns on iPhone.’

To check this line wasn’t a late addition to the page, we looked at a historical version of the page using digital archive website Wayback Machine. The earliest date for which there was a version of the page after the launch of iOS 10.2.1 was March 17 2017, and the line was included.

However, the additional line is still quite vague. ‘It also improves power management during peak workloads’ does not make clear that the update can lead to slowdown.

Regardless, Apple device owners could have benefited from this information being presented with more clarity at the point of upgrade and directly on the device itself.

Do you think Apple could have been more transparent about its actions? Join our conversation: Is it OK for Apple tinker with older iPhones?