Swedish design brand Flyte has sent its new LED light bulb to space as part of a crowdfunding campaign for ‘the ultimate minimal, dimmable LED bulb’.

The Arc bulb has smashed its funding target of £17,000, with more than 900 backers signed up to receive one when it launches later this year. It’s due to go on sale in June, costing around £30.

Flyte is known for gravity-defying designs, with previous products including a levitating light bulb and floating planter. Its new dimmable LED bulb has a patented ‘light guide’ design and is claimed to have a life expectancy of 30,000 hours.

The stunning views you see above were captured by a camera strapped to a balloon 500 miles from the Arctic Circle. Flyte says it sent the bulb above the clouds to ‘capture light in its most precious moments – at the edge of earth and space, where light and darkness meet’.

What’s so special about the Arc dimmable LED bulb?

LED filament bulbs, which mimic the look of old-fashioned light bulbs at a fraction of the running cost, have become increasingly popular in recent years, making the switch from trendy restaurants to people’s homes.

Hoping to set itself apart from the competition, the Arc bulb features a patented light guide design that differs from the standard LED bulb set-up. Usually, LED chips are mounted on thin filament strips and coated in phosphor to give a yellow glow. The Arc has a U-shaped tube to spread the light instead.

According to Flyte, as light spreads around this light guide it gives a warm multi-faceted glow, described as similar to ‘a fire keeping us warm at night’.

£30 is a high price to pay for that soft glow, though. If you’re on the hunt for LED filament bulbs that give off good-quality light, check our LED filament light bulb reviews, as we’ve found some excellent cheap options.

Is the Arc LED bulb worth investing in?

The Arc bulb looks undeniably stylish hanging above the dinner table, but it won’t be much use for lighting up your home. We’ve examined the specification, and this bulb hardly gives out any light at all. Flyte told us that it’s equivalent to a 20W incandescent bulb, which is at best accent lighting.

What’s more, it doesn’t appear to be very efficient. It uses 4W and only gives out around 90 lumens (a measure of brightness), according to the details on the Arc funding page. 4W LED bulbs usually give out 200 lumens or more. Based on this data, this bulb would get a poor one-star rating for efficiency in our lab tests.

Responding to unimpressed comments on Kickstarter, a Flyte spokesperson has said: ‘The LEDs inside the bulb are rated at 200 lumens, but the true output with the Lightguide diffuser and tinted cover is naturally less intense, at 90 lumens.

‘We know that 350 lumens is a popular request, but unfortunately with 2,200K LEDs it would not be possible for us to achieve that rating with our current Lightguide design. It is also important to us that we deliver a product that fits our original vision.’

Our verdict? By all means buy it for the atmospheric glow and stylish design, but don’t expect useful levels of light output.

Three more stylish light bulbs to look out for

None will give you super-bright lighting, but if you’re after a style statement, these bulbs may tick the boxes: 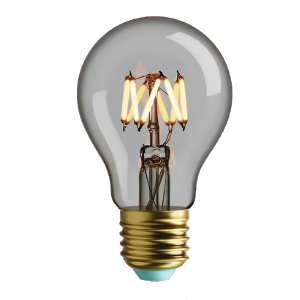 If you’re shopping for an LED bulb with a vintage disguise, Plumen’s Wattnott range is worth a look. Prices start from £11.95, which will get you a Wanda LED (right). It’s a dimmable bulb (4.5W and 360 lumens) with an estimated lifetime of 25,000 hours. 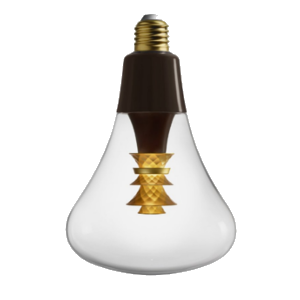 Also available from Plumen is the dimmable 003 LED, on sale for £150. A unique lamp design and built-in spotlight makes it well-suited for hanging above the dinner table, and Plumen says it will last for around 10,000 hours. It’s a 6.5W bulb with an output of 250 lumens. 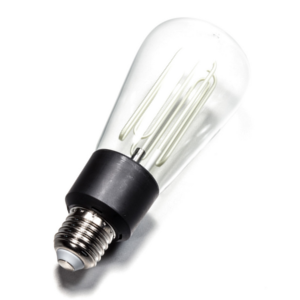 The pear-shaped, 7.7W Eco-Filament Bulb costs £30 and has a lifespan of 25,000 hours. Unusually, it contains CFL (compact fluorescent) technology, but in miniature, for an alternative to LEDs. It’s available with standard screw (E27) caps or standard bayonet (B22) caps, and has a 350 lumen output.

You may be tempted by some of the bulbs above, but they’re expensive for the amount of light they give out. Remember – anything less than a 60W-equivalent will be good enough for accent lighting, such as a small table lamp or spotlight, but won’t be enough to light a room unless you have multiple bulbs.

A whopping 82% of Which? members have LED lights in their homes, and we’ve uncovered Best Buy LEDs for as little as £2.50. If you’re shopping for the perfect light bulbs for your home, see our five tips for choosing the right light bulb.