Whether you’re trying to cut down on carbs by swapping pasta for courgetti, want to tempt your kids to eat more veg, or simply love how pretty and Instagrammable spiralized veg looks, you’ll want a spiralizer that’s quick and easy to use, and makes nicely formed noodles.

We’ve tested 18 popular spiralizers, from cheap and simple manual vegetable spiralizers costing just £12, to premium electric models such as the Veggie Bullet, which will set you back a cool £120, to find the best options.

Our tests uncovered six brilliant Best Buy spiralizers. And the good news is that we’ve found top-scoring spiralizers for every budget. So whether you just want to make the occasional batch of courgetti, or want to spiralize veg regularly, we’ve got a recommendation for you.

The best model overall scored an impressive 84%, turning out beautiful noodles with minimal wastage. It transformed veg into perfect ribbons in record time, so it’s a good option if you’ve got a crowd to feed. However, some spiralizers disappointed in our tests, producing poorly formed noodles or proving tricky to use. The worst spiralizer we tested scored just 47%.

Jump straight to our independent spiralizer reviews to see which models we recommend for fuss-free courgetti.

What type of spiralizer should you buy?

We put both electric and manual models to the test. Electric spiralizers work a bit like a food processor – you feed your veg in the top, and the machine does the hard work for you. With manual models, you manually turn the veg, or a handle, to create your noodles.

These are generally more expensive, but promise to take the effort out of spiralizing. 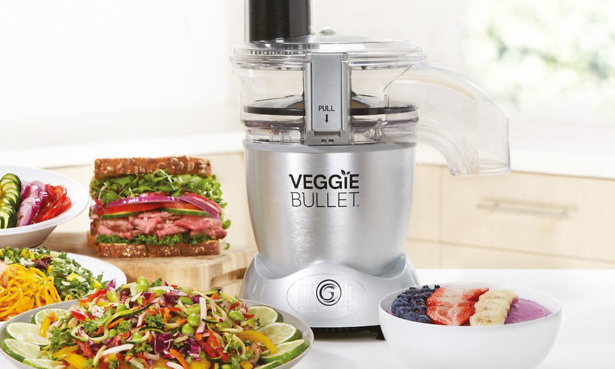 Electric models we’ve tested include the budget-busting Veggie Bullet from Nutribullet (£120, above). It’s more like a mini food processor, as it can shred and slice as well as spiralize. Food is loaded into the top via a chute, and spirals drop into a container below. Shredded veg shoots out of the side into a dish.

Other top-loading electric spiralizers include the Morphy Richards 432020 (£30) and the Kenwood FGP200WG (£50). Both models are cheaper and can make veg noodles or ribbons.

Electric spiralizers generally proved quicker and required less effort than manual models in our tests, but some were more successful than others at creating spirals. Check our spiralizer reviews to find out which ones will give you perfect spaghetti swirls.

These require you to turn a handle to push your veg through the spiralizing blade. You’ll usually get a wider range of noodle size options to choose from with these models. Costing up to £40, they aren’t too pricey either. 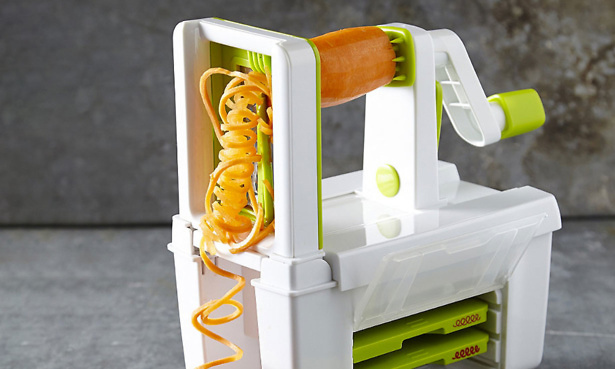 The Lakeland Easy Store (£30, above) and Mueller Spiral Pro (£30) both come with four blades to make everything from ultra-fine noodles to wider noodle ribbons. The blades can be stored on the spiralizer, so you won’t have sharp blades floating around in your cutlery drawer. 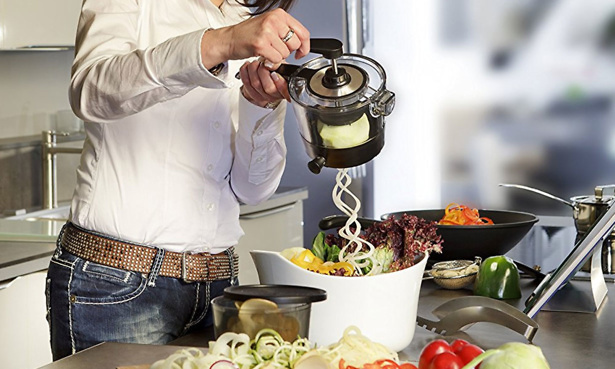 The Gefu Spiralfix (£35, above) allows you to twist your noodles from above. It comes with four built-in noodle blades, which you can select by twisting a dial on the side, and a container for catching your spiralized veg.

If you don’t like the idea of yet another gadget taking up valuable worktop space, a compact handheld spiralizer could be worth a try.

The JML Veggetti is small enough to keep in a drawer and works like a pencil sharpener: twisting the top shaves off spirals of veg. It’s also the cheapest model we’ve tested, at just £12. 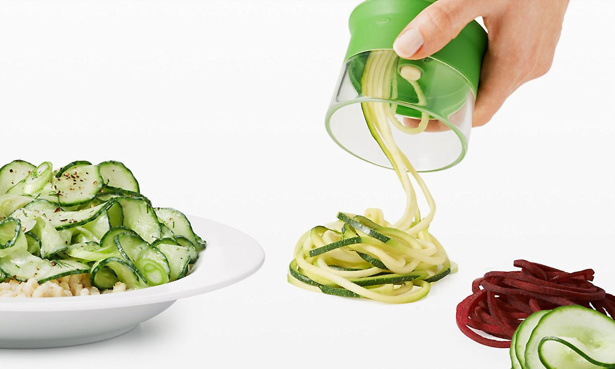 The colourful Oxo 3-blade handheld spiralizer (above) has three noodle size options and costs around £25. It works more like a pepper grinder, dispensing spirals or ribbons of veg directly onto your plate.

This type of spiralizer is ideal for smaller quantities, but some are better than others. Get straight to our top recommendations with our spiralizer Best Buys.

For more advice on choosing the right spiralizer for you, see our full spiralizer buying guide. 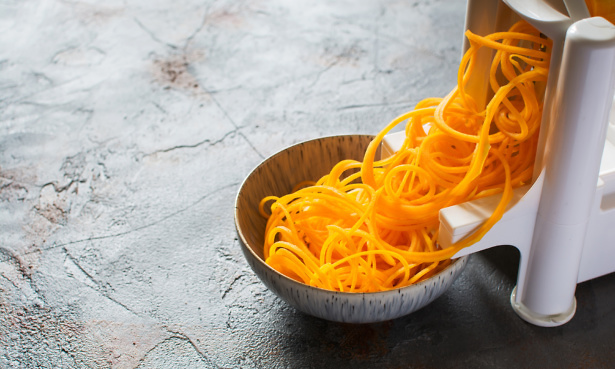 You’ll probably want to use your spiralizer on a variety of foods, so we test them with a selection of veg designed to assess how they handle different sizes, shapes and textures.

We rate each spiralizer for how much time and effort is needed to spiralize – as nobody wants to build up a sweat churning out tiny amounts of courgetti – before assessing the quality of the noodles produced.

We also measure how much food is wasted, either stuck behind the blades or attached to the food gripper, and how easy the spiralizer is to clean.

To find out more about our testing, head to our guide on how we test spiralizers.

Here’s the full list of spiralizers we’ve tested. You can click on the links to get straight to the individual review:

2020 vision: best opticians revealed by Which?