The BBC is reporting that British trains have skipped an average of 160 stops per day in the year to 23 February,.

The train operator that missed the most was Govia Thameslink (GTR). This accounted for 16,000 failure-to-stop events from a total 52,500 across the network, which had 6m planned services.

For the year to February, 17 in every 1,000 planned GTR trains missed one or more stops – about 50 per day – more than double the national average for train operators.

Join the conversation: have you been a victim of ‘stop skipping’?

A spokeswoman for GTR told the BBC that skipping stations is a ‘last resort when a late-running train would otherwise prolong disruption’.

‘We operate the country’s most congested rail network and with a train departing every 27 seconds on average. So even a minor delay to one train can cause a widespread and long-lasting knock-on effect to many other services and passengers across many routes.’ 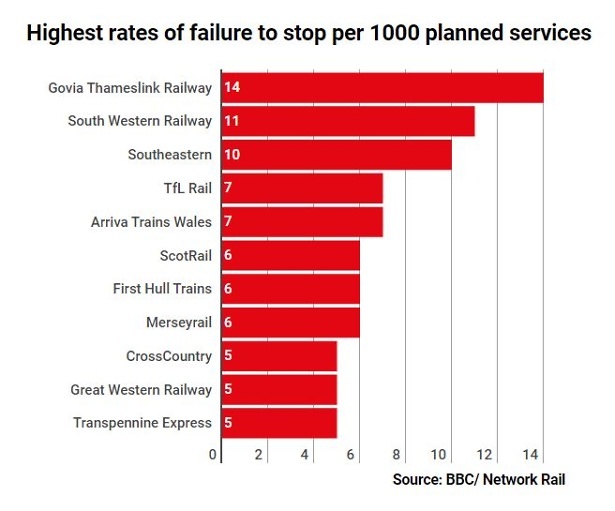 The best performing operators were Chiltern, Heathrow Express and Virgin Trains East Coast, with on average less than one in every 1,000 of their trains failing to stop.

You could be owed money if your train skips your station

If your journey has been delayed because a train didn’t stop to pick you up, you can claim compensation for the delay it takes you to eventually get to your final destination.

But your journey has to be delayed by at least 15 minutes, 30 minutes or in some cases an hour (depending on your train company) in order for you to be entitled to Delay Repay compensation.

Read more about how to claim compensation if your train misses your station in our free guide.