The smartphone giant’s new arrivals all have something to offer, with premium flagship features such as dual cameras and face unlock trickling down the price ladder.

If you don’t have the budget for a premium smartphone from the likes of Apple and Samsung, Motorola’s range is certainly worth a closer look. See below for more details on what to expect from the Moto G6, G6 Play, G6 Plus, E5 and E5 Plus.

Following in the footsteps of last year’s G5 is the new Moto G6. Motorola says that its new mobile is ‘designed to impress’ and comes with ‘all-day battery life’, but the company isn’t going into specifics just yet.

So what about the cameras? On the back, you’ll spot dual rear 5Mp and 12Mp cameras, while an 8Mp camera (used for face unlock and wide-angel selfies) is on the front. Motorola has crammed lots of features into the camera app, including a mode that has the camera identify what it’s looking at (a famous landmark, for example) and offer information. You get unlimited Google Photo storage on the G6 (as with the rest of the new phones) – a big bonus if you like taking lots of snaps.

The Moto G6 goes on sale from 2 May, starting at £219. We haven’t tested the Moto G6 in our lab just yet, but its predecessor, the Motorola Moto G5, has tackled our rigorous tests. See how it did in our full Moto G5 review. 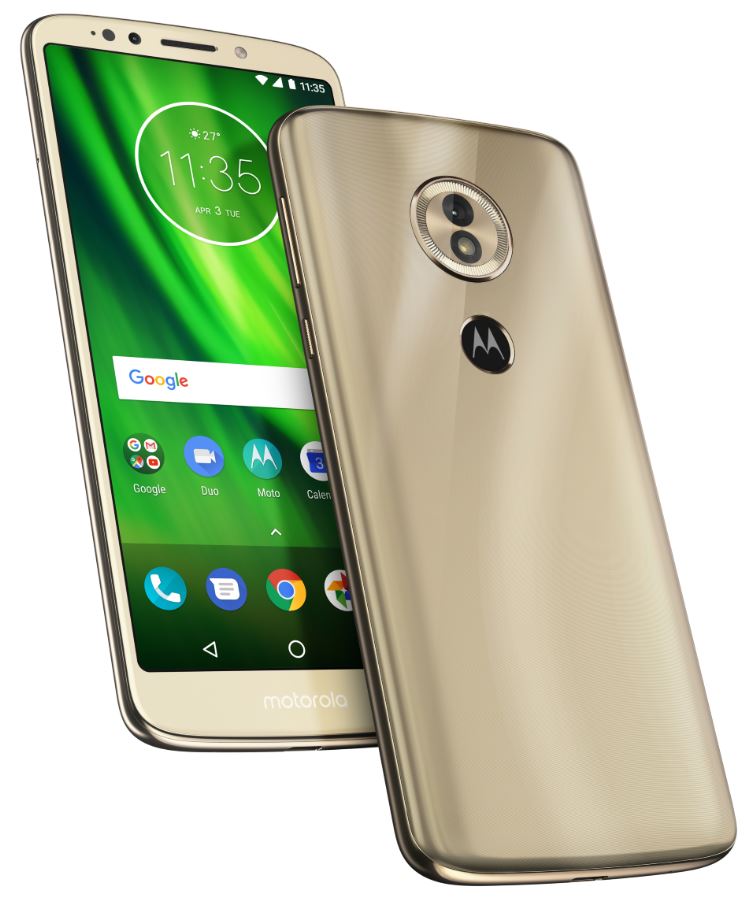 This is the cheapest smartphone in the G6 range, and battery life is its key strength. It has a 4,000mAh battery (larger than the standard G6) that’s said to offer ‘up to 32 hours on a single charge’. That’s a bold claim, and something we’ll be testing for ourselves in our test lab.

Again, there’s a 5.7-inch Full HD Max Vision display, but this G6 model is powered by a Snapdragon 1.4 GHz octa-core processor. We don’t expect it to be as powerful as the G6’s processor, so the G6 Play could potentially struggle with multitasking and high-end games.

The G6 Play still offers decent specs for the price, though. You get 3GB of Ram, a 13Mp rear rapid focus camera, an 8Mp front camera and a fingerprint sensor. Motorola says that the G6 Play will automatically take multiple shots when you hit the shutter button, then recommend the best one to keep. You only get 32GB of internal storage out of the box, but a microSD card slot means you can add up to 128GB.

If you want a large-screen mobile on a limited budget, the new Moto G6 Plus might make your shortlist. It’s larger than the standard Moto G6, with a 5.9-inch, 18:9 display.

Motorola says the Plus model serves up ‘serious performance’, offering 4GB or 6GB of Ram, 64GB of storage (expandable up to 128GB) and a Snapdragon 630 processor. A fingerprint sensor is crammed below the display, but you can also use the 8Mp front-facing camera to unlock the mobile with a quick glance. The 12Mp and 5Mp dual rear cameras can shoot 4K Ultra HD video.

While we wait to get our hands on the Moto G6 Plus, see how last year’s model performed with our full Moto G5 Plus review.

Both the Moto E5 and E5 Plus (below) run on Android Oreo, and they’re the result of Motorola’s efforts to serve up a solid feature list while keeping things affordable. The entry-level Moto E5 has a 5.7-inch display, a 4,000mAh battery, a fingerprint reader and an 8Mp rear camera. For £30 more you can opt for the Plus model – it has a larger 5,000mAh battery, a 6-inch screen and a 12Mp camera.

If you want to see which sub-£200 smartphone we recommend, see our smartphone reviews page.

Buying a mobile phone on a budget

As our lab results prove time and time again, you don’t always need to spend big to land yourself a great smartphone. Not everybody wants to spend £800 on a brand new Samsung or Huawei smartphone, which is why we review phones for every budget. 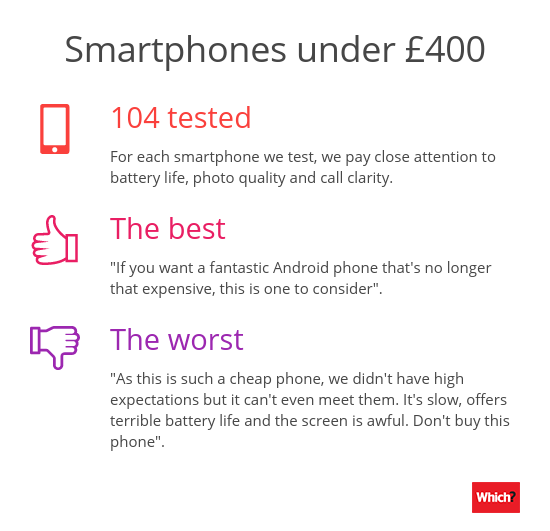