Google showed off some ambitious plans at this year’s Google I/O event in California, and it looks like smart devices and augmented reality are set to become some of the biggest talking points of the year.

Grabbing the headlines were a selection of smartphone features powered by artificial intelligence (AI). Updates to Android P (we don’t know what the ‘P’ stands for just yet), Google Maps and Google Lens will see AI take over to save you time and improve battery life.

Keep scrolling for a closer look at what to expect from Android P, plus details on what’s next for the voice-activated Google Assistant.

Best Buy smartphones – take a look at the best of Android.

As AI technology improves, our smartphones are learning more about our habits and improving the user experience based on what they learn.

Have a robot make a call on your behalf

This week, we were treated to a glimpse of the future of Google Assistant, which will soon be able to make phone calls on your behalf to actual human beings. A tech demo for the new ‘experimental’ tool, called Google Duplex, showed Google Assistant ringing up a hair salon and booking an appointment. The voice assistant was able to respond quickly to the person on the other end of the line without giving away the fact it was a robot.

Have a ‘natural-sounding’ conversation

There are a couple of other changes being made to improve the Google Assistant experience on mobile. In the coming weeks, you’ll be able to have more natural conversations without having to say ‘OK, Google’ every time you make a request. A new mode called Pretty Please will also drop later this year, using positive reinforcement to encourage children to speak politely to Google Assistant.

Controlling multiple devices at once with your voice is a breeze if you’re using Scenes on the Apple HomeKit app. Google has implemented a similar feature by rolling out Customer Routines, which let you assign multiple actions to a single command. For example, you can say ‘dinner’s ready’ and Google Assistant will turn on some relaxing music and switch off the TV.

The battle for the title of best voice assistant rages on between Apple, Google and Amazon. See what sets each voice assistant apart by checking our new guide – Amazon Alexa vs Google Assistant vs Siri.

Get from A to B with augmented reality 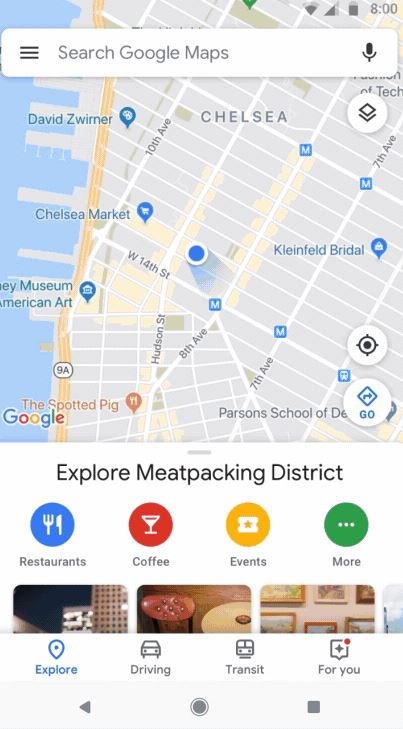 Augmented reality (AR) functionality could potentially make its way to Google Maps, judging by a demo on-stage at this year’s Google I/O. Essentially a real-time version of Google Street View, the new mode would present you with on-screen directions by annotating the buildings around you and highlighting specific roads and paths. Turn-by-turn directions in AR would hopefully make getting lost a thing of the past, but it’s early days.

The wait for AR support goes on, but Google Maps has been updated with some other goodies in the meantime. The app’s Explore tab (right) has been redesigned to offer points of interest and popular restaurants based on the area you’re looking at.

If you tap on a restaurant, the app will generate your ‘match’ number – it’s a score that suggests how likely you are to enjoy the food based on your food and drink preferences, places you’ve been to and ratings you’ve given similar restaurants. 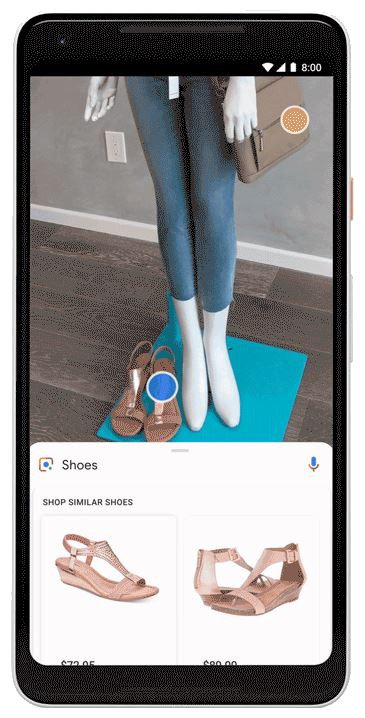 Making its debut on the Google Pixel 2 last year, Google Lens gives you real-time information based on what you’re pointing your phone camera at. It was originally a Pixel exclusive, but Google says it’s now available on supported models from Motorola, Sony, Nokia and OnePlus.

A couple of new additions have been announced this week. First we have smart text selection, which lets you copy and paste text from the real world into a notepad on your phone. This could save you from manually typing up a really long wifi password.

Style match for Google Lens will give you a helping hand when it comes to grabbing a bargain online. You can open Lens, point your camera at an item of clothing and see if it’s available for cheaper online. You’ll also be presented with user reviews and items that have a similar look.

Android Oreo is only installed on 5.7% of Android smartphones worldwide, but that hasn’t stopped Google from showing off its new, ambitious update at this year’s Google I/O event in California. Here are some of the highlights. 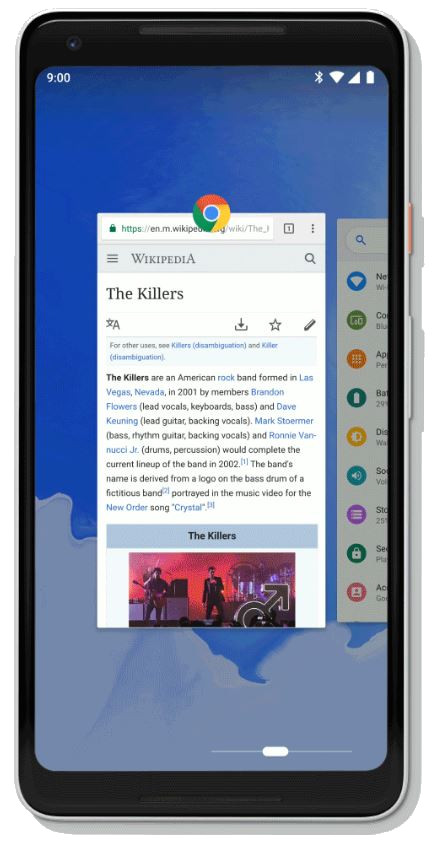 It’s time to wave goodbye to the Home button on your Android. With Android P installed, it’s all about gestures – swipe up for an overview of what you’ve got open, and swipe up a second time to see your full list of apps. If you’ve seen how gesture controls on the iPhone X work you’ll notice some similarities here. These changes aim to make exploring your phone with one hand less of a pain.

Squeezing more hours out of your mobile phone just got easier thanks to Google AI. If you’re running Android P, your phone will keep an eye on which apps you launch and when, shutting down apps running in the background that it doesn’t think you’ll revisit anytime soon. With machine learning, the same tech is applied to your screen brightness, which will automatically change ‘to match your habits’.

If you’re shopping for a new smartphone that will last you all day without a charge, see our advice on mobile phones with the best battery life. Alternatively, pick up a portable power bank charger. 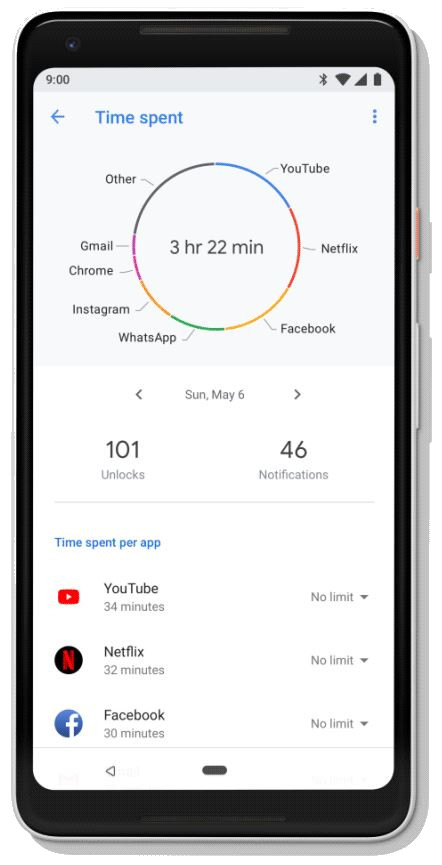 Google wants you to know how much time you’re spending on your mobile. The search engine giant’s new Digital Wellbeing tool lets you see exactly how much time you’re spending on your phone, and which apps are stealing your attention. A quick trip to the Digital Wellbeing dashboard lets you limit the amount of time you spend on a certain app. A tool to encourage you to put down your phone and live a little can’t be a bad thing, and it could be a blessing for parents, too.

We’ve also spotted a new feature called ‘Wind down’. Tell your phone when you want to go to bed and the device will automatically swap to Do Not Disturb mode (which mutes all notifications) when the time comes. The screen will turn black and white to remind you of the promise you made to yourself earlier in the day.

The final build of Android P won’t be out until later this year, but Google has confirmed that some smartphones will support the public beta (demo). The list of compatible devices includes the Sony Xperia XZ2, the upcoming OnePlus 6 and Google’s own Pixel, Pixel XL, Pixel 2 and Pixel 2 XL.

Samsung owners are out of luck, but if you have one of the devices above you can give Android P a spin right away. Don’t be surprised if you spot some bugs, though – this isn’t the final release.

Discussing its targets with press this week, Google says that improving performance on Android TV is a priority. The arrival of Android P will bring about some changes that speed up the OS and make it easier to interact with, but we’re still waiting to hear how Google will accomplish that.

What we have seen is a new product category introduced. In an effort to make Android TV more accessible, Google has partnered up with JBL to release the JBL Link Bar. 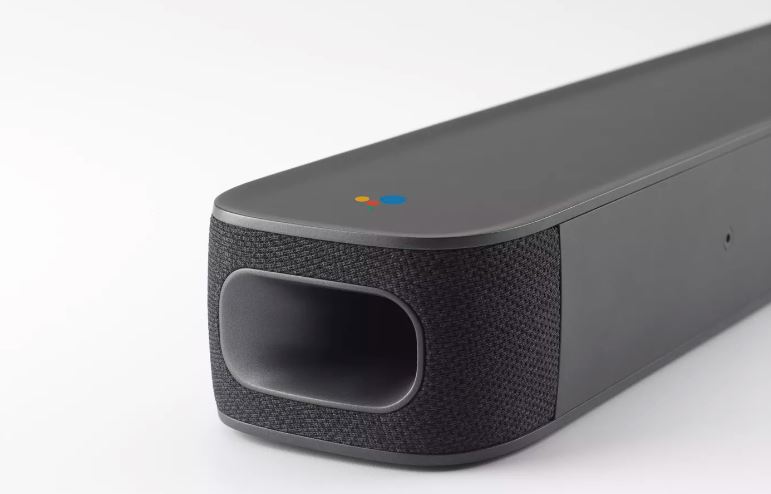 The JBL Link Bar redefines what a soundbar is capable of, acting as both a Google Assistant-enabled speaker and an Android TV box. Plugging the Link Bar into your regular TV means you get the same experience on offer from a dedicated Android TV. It will also be able to control other Google-compatible smart home devices. The device is set to arrive ‘later this fall’.

Planning on buying a new TV? Don’t part with your money without checking our guide on the best smart TVs for 2018. If you want to give your existing TV a sound boost, see our range of Best Buy soundbars.