We have tested the priciest Windows laptop to grace our labs in over two years. What could make a laptop so expensive?

Is it ever worth paying that much for a laptop? We dive into the specifications to explain how it all adds up.

Want to see our findings straight away? Click through to our Dell XPS 15 2-in-1 review.

The most obvious feature of this new laptop is its 360-degree hinge, making it a so-called 2-in-1 model. This means you can spin the screen around, hinge it down and make the laptop more comfortable to use as a drawing pad. You can also put it into ‘tent’ and ‘stand’ mode to put the screen front-and-centre when watching Netflix and the like.

We’ve found that 2-in-1 laptops are, on average, £139 more expensive than regular laptops – so you pay the price for the extra practicality.

The Dell XPS 2-in-1 weighs nearly 2kg, though, so if you were thinking of using it as a tablet to hold while standing up, think again. This is far too heavy to do that for long periods of time, but ideal for taking notes at your desk.

This laptop has some impressive specifications, including a 256GB solid-state drive (SSD) instead of a standard hard disk drive (HDD). SSDs are better than HDDs for speed, although they do lack capacity when compared with HDDs that cost the same price.

Still, SSD laptops tend to start up around three times faster than the average HDD laptop. A typical HDD boots up in around 20 to 30 seconds, while an SSD can do it in well under 10 seconds. But they also cost, on average, £325 more.

SSD laptops are also generally a lot more speedy when opening programs, which is not to be sniffed at if you’re constantly opening files and programs.

Read our guide to SSD vs HDD for more. 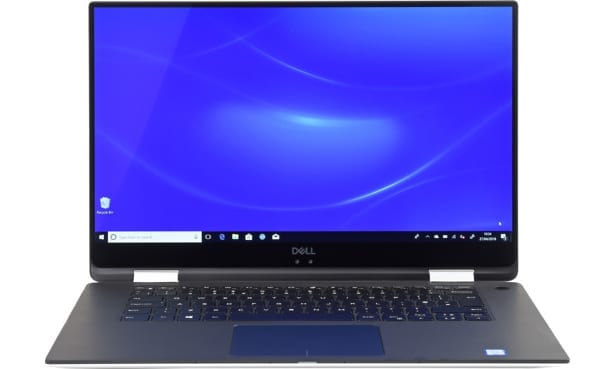 The Dell XPS 15 2-in-1 also features the very latest 8th-generation Intel Core i5 and i7 processors, which also come with AMD’s powerful Vega graphics chip for extra performance in 3D modelling work, video editing and gaming. This is where a lot of this high asking price comes from.

But it’s not always the case that the most expensive laptops score better in our performance tests. In fact, on average, it’s practically neck and neck between mid-range laptops costing less than £1,000 and those costing more than a grand. That’s because laptops that cost more are also often lightweight Ultrabooks, where a little performance is sacrificed for weight reduction.

The model on test features a 15.6-inch touchscreen with a Full HD resolution. If you go for the top-specification model, you get an Ultra HD screen. We’ve found that opting for a higher-resolution screen often grants you a much better viewing experience, as you get not only a higher resolution but also the latest screen tech for a brighter, more colourful and true-to-life picture.

Dell claims that the Full HD panel features the same high-end technology as the Ultra HD model, but you’ll have to see in our full review whether it delivers the picture quality you’d expect at this price.

Audio is one area where you might lose out when buying a 2-in-1, even though you’re paying more. We’ve found that, on average, these machines perform only very slightly better than the average laptop, despite often making big claims about sound quality.

This is often down to compromised speaker placement to allow audio at whatever angle you’re holding the laptop. Still, at this price you don’t want a hint of compromise, so checking audio quality is always something you should consider.

How we test laptops

Our laptop tests go into scientific detail. The Dell XPS 15 2-in-1 is no exception, and our lab’s methodology is rigorous and ruthless in equal measure. If this laptop has a flaw that takes away from its asking price, our experts will find it.

How is coronavirus affecting TV retailers?