It may seem like smartphones are getting more and more expensive, but there is an alternative. Even if you’re a real power user or someone who fawns over the latest tech, there are handsets out there that promise you outstanding performance at a seemingly industry breaking price. The OnePlus 6 is one such model, as well as the latest updates to the ever-popular Motorola Moto G series – and we’ve just finished testing them.

The OnePlus 6 aims to tackle the top-of-the-range models of this world, as does the similarly priced Huawei Honor 10 – you can read on to see what we made of both of them when they passed through our test lab. As for the Moto G6 range, there’s three different models in an attempt to appease everyone: the basic Moto G6 looks like a feature-packed mid-range handset, the Moto G6 Play is for the budget end of the market, and the Moto G6 Plus stretches out the display and packs in a more powerful processor for those after more power for less cash.

There are three models in the new Moto G6 line, with some fairly minor – but important – distinctions between them. Let’s run through them in order of price: 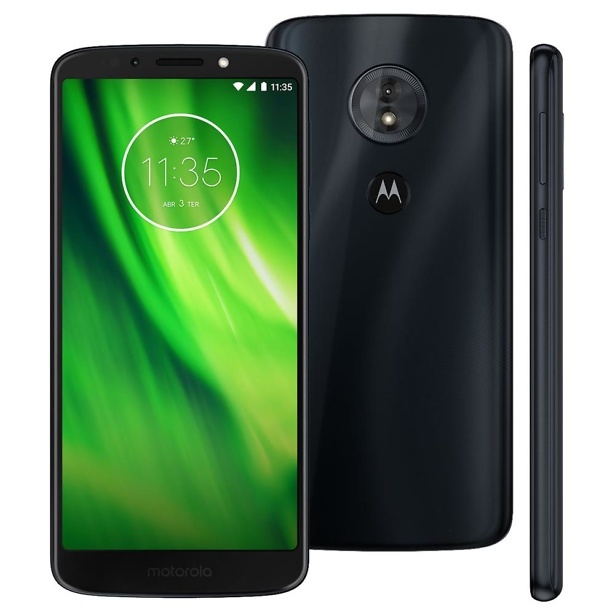 When you see a smartphone priced at £170, you likely fall into one of two camps: those who think it’s an irresistible bargain, and those who think it’s surely too good to be true. More often than not they fall into the latter category, but one look at the specs behind the Moto G6 Play and even the hardiest of sceptics may find their eyebrow being raised.

Far from simply a dumbed-down version of the base Moto G6 model, the Moto G6 Play’s main selling point is its enormous battery. At 4,000mAh it’s bigger than two iPhone 8 batteries combined, 33% larger than the regular Moto G6 and 25% larger than the most expensive model, the Moto G6 Plus. The Moto G6 Play seems to genuinely be designed with the needs of its target audience in mind – rather than just stripping back a popular phone to make it cheaper, its cuts costs where necessary without compromising on what matters to the user.

Its plastic body is another example. Sure, it doesn’t feel as nice as the glass and aluminium bodies of its siblings, but its more durable and won’t shatter into a million pieces the first time you drop it.

One change we’re not all that delighted with is the scaling down from a Full-HD display to just an HD display. On a device with a 5.7-inch screen we’d like to see 1,920 x 1080p as an absolute minimum, or it risks losing sharpness.

Could the Motorola Moto G6 Play be the bargain mobile you’ve been waiting for? To find out, click the link to read our full Moto G6 Play review. 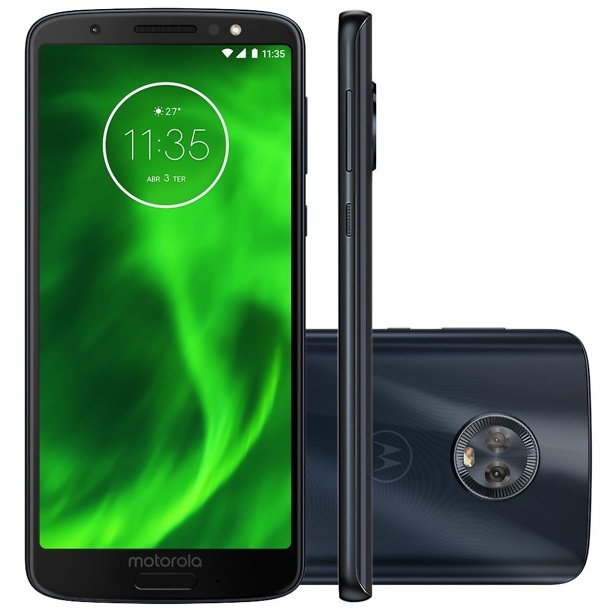 Even at £50 more than the Moto G6 Play, the Moto G6 is still a very cheap mobile phone in its own right. What’s more, you get some very impressive tech for your moderate outlay. Sticking with a 5.7-inch display, it ups the resolution to Full-HD and switches out the plastic body for a glass back with aluminium trim.

You get 3GB of Ram and 32GB of storage on both devices, but the Moto G6 ups the power with a Snapdragon 450 octa-core processor. Perhaps the most noticeable step up, though, is the transition from a single to dual-lens rear camera. In place of the Moto G6 Play’s 13Mp snapper is two cameras – one 12Mp and one 5Mp. The two work together to take photos with a better dynamic range of colour and a greater sense of depth. Plus, it can record video at 60fps, not just 30.

Has Motorola managed to strike the perfect balance of performance and price? Find out with our full Motorola Moto G6 review. 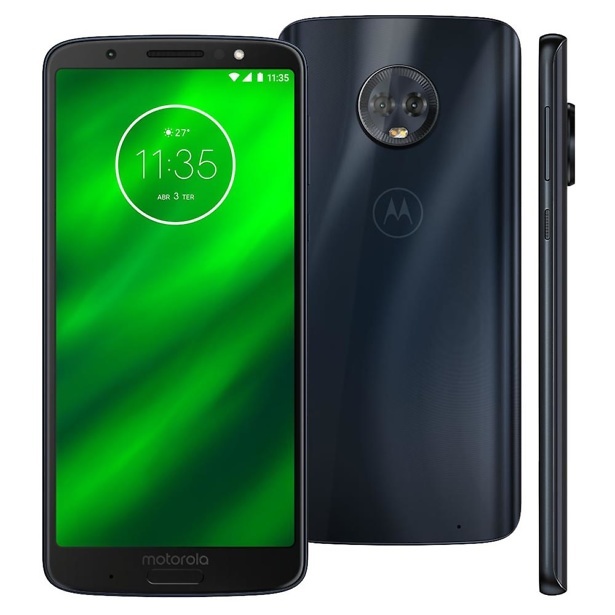 Coming in at almost one-quarter of the cost of an Apple iPhone X, the Moto G6 Plus is the ‘premium’ option within the G6 range. The ‘Plus’ part of its name may lead you to expect that it’s got a screen substantially larger than the Moto G6, but that’s not actually the case – at 5.9 inches it’s only fractionally bigger, and a fair bit smaller than the biggest Android handsets out there.

What the ‘Plus’ more likely refers to is the bump up in specs. Its Snapdragon 630 processor may not be the fastest on the market but it’s still packs a fair punch, and is considerably more powerful than the chips found in the other two Moto G6 models. It also ups the Ram to 4GB and the on-board storage to a respectable 64GB. You needn’t worry about that too much, though – if you’re unhappy with the amount offered on any of the Moto G6 models they’re all micro-SD card compatible.

The camera is largely the same as the dual-lens one featured on the Moto G6, but the big difference is that this one can film video in 4K. It also has slightly better aperture and an enhanced autofocus. At 3,200mAh the battery is also slightly better, but can’t hold a candle to the monster brick contained within the Moto G6 Play.

For those disillusioned and upset with the recent trend of flagship handsets ditching the headphone jack in favour of putting it in the charging port instead, we have good news: all three Moto G6 devices have a 3.5mm jack in addition to their USB-C charging ports. They also all have fingerprint sensors for unlocking and security – something you don’t always see on mobile phones this cheap.

Could it possibly beat the high-end, big-money flagship Android handsets out there? There’s only one way to find out – be sure to read our Motorola Moto G6 Plus review.

In the market for a cut-price smartphone? Read our guide to the best cheap mobile phones. 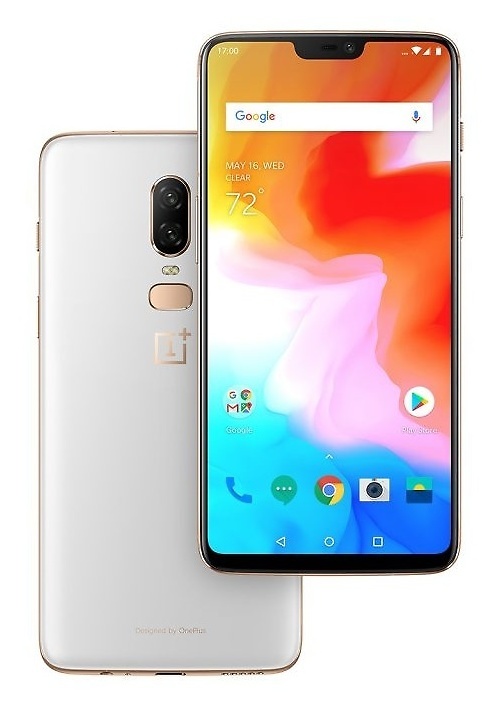 The OnePlus 6 costs £400 less than the Samsung Galaxy S9+. We thought we’d put that out there in black-and-white so that you could bear that in mind while reading up on what it has to offer. For your £469 you get an octa-core processor consisting of four 2.8GHz cores and four 1.7GHz cores, compared with the Galaxy S9+’s 2.7 and 1.8GHz cores, 64GB of on-board storage and 6GB of Ram (that’s half the storage of the Samsung but the same amount of Ram), and a dual-lens rear-facing snapper comprised of one 16Mp and one 20Mp camera, versus the Galaxy S9+’s twin 12Mp camera. The screen on the OnePlus 6 is also bigger, too, at 6.28 inches – just in case the Samsung’s 6.2-inch display wasn’t quite enough for you.

If you’re thinking that there’s not much between these models, then you’d be right. There are a couple of aspects where the Galaxy S9+ is at an advantage: its display is greater than Quad HD rather than the elongated Full HD of the OnePlus 6, the camera has a better aperture number and larger pixels, and its on-board storage can be expanded via a micro-SD card – not possible on the OnePlus. Whether you reckon those differences amount to £400, though, is up to you.

Did the OnePlus 6 live up to its specs when we put it through its paces in our test lab? To find out, click the link for our full OnePlus 6 review.

Honor made a name for itself as the budget-conscious, wallet-friendly sub-brand of Chinese giant Huawei. They weren’t the most exciting of handsets, but they did offer phones that didn’t look or feel totally awful in an age when cheap handsets were rarely either of those. As time moved on its handsets went from strength to strength, and the Huawei Honor 10 is perhaps its strongest release to date. For only £400 you get a 5.8 Full-HD display, a dual rear-camera, a massive 128GB of on-board storage, all contained within a stunning pearlescent or metallic body. Could it really match up to the big names? Read our full Huawei Honor 10 review to find out.

In the market for a true budget handset, but don’t like the look of the Motorola Moto G6 Play above? Perhaps the new Huawei Y6 could tempt you. The two handsets actually have a lot in common: both have a 5.7-inch HD display, a 1.4GHz quad-core processor and a 13Mp main camera. The extra £50 is saved courtesy of less built-in storage, less Ram and a smaller battery – but is that enough to outweigh its irresistible price? Read our full Huawei Y6 (2018) review to find out.

Browse our pick of the best mid-range mobile phones for great models that don’t cost the earth.