First launched in June 1998, the bi-metallic coin was the first of its kind since tin farthings, with a copper plug in the centre, were issued as tender back in 1692.

The £2 has stirred a tremendous amount of coin fever among collectors and, with new designs due to be released this year, the momentum isn’t showing signs of slowing.

Find out the rarest and most valuable £2 coins in circulation and some exciting new designs to look out for over the year.

What makes a coin rare and valuable?

Coins become rare when there are fewer in circulation. Often the more rare a coin is, the more valuable it becomes to collectors.

Resource’s such as Change Checker’s Scarcity Index can help give an indication of a coin’s value could be. Change Checker is an online platform that allows you to trade rare coins and notes with other collectors.

Coins are given a score out of 100 and the higher the score the rarer and more potentially valuable a coin is.

£2 coins designed to commemorate the 2002 Commonwealth Games are the rarest in the UK.

Around 2.5m identical coins were issued for the games but there was one unique difference.

The total release was, in fact, divided into four sets and each set featured a different flag to celebrate the participating Home Nations – England, Wales, Scotland and Northern Ireland.

The Wales Commonwealth Games £2 coin is the rarest of the set and holds a scarcity score of 100. Only 588,500 coins were minted and could fetch around £90 on eBay.

With a scarcity score of 99, the Northern Ireland Commonwealth games £2 coin is the second rarest. Around 485,000 of this design were minted and it could fetch £56 on eBay.

The third rarest coin, with a scarcity score of 86, is the England Commonwealth Games £2 coin. Only 650,500 of this design were minted and it could earn you around £61.

The Scotland Commonwealth Games £2 coin currently has a scarcity score of 82. 771,750 of this design were minted, the highest of the commemorative sets, and it could earn you around £50 on eBay.

It’s important to note that a coin’s value also lies in the eyes of the collector, so this can also affect how much someone is willing to pay for a particular design.

This year has been a big one for collectible change, and has already seen the release of 26 rare A-Z of Britain 10p coins and four new Peter Rabbit 50p coins.

A series of new commemorative £2 coin designs will be released over the next 18 months, so keep your eyes peeled!

Five new £2 coins have been designed to commemorate the Centenary of the Royal Air Force which formed on  April 1 1918.

The first commemorative coin in the set was designed by Rhys Morgan, and features the RAF badge in the steel centre, to celebrate the Airforce as a whole.

The other four coins in were designed by brothers Richard and Neil Talbot and each feature a different iconic aircraft including the Spitfire, Vulcan, Sea King and Lightning.

Designed by Stephen Raw this £2 coin commemorates the centenary of the WWI Armistice.

The coin features the quote ‘The truth untold, the pity of war’ from Wilfred Owen’s poem, Strange Meeting.

Owen was a soldier and poet, who’s works were published after he died in action at the age of 25. 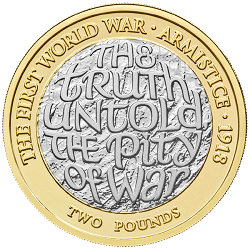 A new £2 coin will be released this year to celebrate 200 years since the publication of Mary Shelley’s Frankenstein.

Designed by Thomas Doherty, the coin will have the word Frankenstein etched in electric gothic font on the steel coloured centre and feature the quote ‘The Modern Prometheus’ in the yellow outer ring. 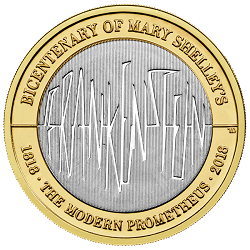 To mark the occasion, a new £2 coin design featuring his ship the ‘HM Bark Endeavour’ will be released soon. 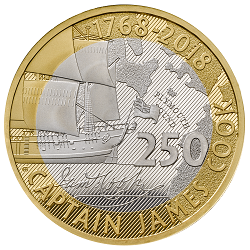 What to do if you find a valuable coin

If you’re lucky enough to stumble upon a rare coin the first thing to do is consult the Royal Mint to make sure it’s real.

They’ll usually send you a letter to confirm it’s authenticity.

Once you have this, you can sell it at auction, online or via a coin dealer.

Our video below explains the different types of coin you can collect and, for more information about how to spot an illegitimate coin, check out our recent investigation revealed: the dark side of the coin investment craze.