Which? Travel research found that passengers searching for bigger seats with more legroom might be better off paying for upgrades on WOW or Norwegian Air, rather than forking out for full price fares on flag carriers like British Airways and Virgin Atlantic.

We found direct fares to San Francisco for as little as £175 with Norwegian Air. The low-cost carrier offers a 31 to 32-inch seat pitch on these flights (the distance from your headrest to the one in front and the best indicator of legroom) – which, depending on where you sit, is already a little more generous than Virgin’s standard 31 on the same route.

However, if you’re long of limb, you can opt for one of Norwegian’s bulkhead or exit row seats, with up to 38 inches of legroom.

The budget airline charges a flat fee of £25 for seat selection on long-haul flights, regardless of what size you choose – so you’ll have plenty of room to stretch out, provided you get in early to reserve the seat. Compare that to Virgin’s closest equivalent ‘Economy Delight’ and you’re looking at an extra £50 for 34 inches. 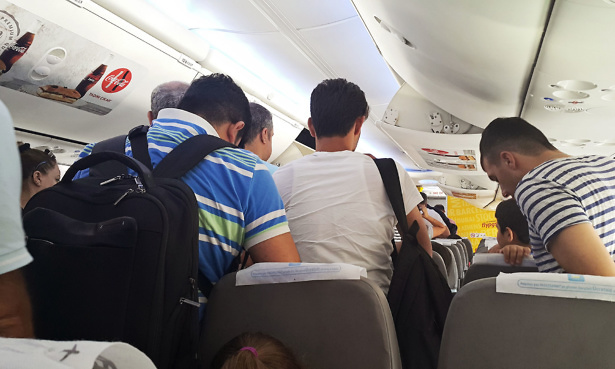 It’s a similar story with Icelandic low-cost airline WOW Air, where we found fares to New York JFK for as little as £220 – albeit with a long stopover in Reykjavik. Here, standard economy seats are a bit tighter at 29– 31 inches – compared to a standard 31 on BA.

It’s not a bad little investment given that BA’s extra legroom starts at £50, and fares are usually higher than those from WOW Air.

There are fewer options to upgrade on short-haul, but don’t automatically assume the budget carriers have the pokiest seats. While both Tui and Thomas Cook airlines have a knee-crushing seat pitch of just 28 inches, it’s a different story with Ryanair. The budget carrier offers the same legroom as BA on many routes, although seat width with Ryanair is a snug 17-inches.

See our which airline has the best seats article for a comparison of seat pitch and width across all the major carriers. This also includes a seat comfort score for each airline, based on ratings from thousands of passengers.

The end of reclining

And don’t assume you can gain some precious wiggle room by leaning back. Both Ryanair and Easyjet have scrapped reclining seats – yet another fare-slashing exercise. BA is also set to join them later this year on some European routes, although a spokesperson for the airline told us seats would be pre-set at a ‘gentle’ recline.

Currently, there is no law detailing the minimum dimensions of a plane seat. Instead, a maximum passenger load is stipulated for each aircraft, based on whether it can be fully evacuated within 90 seconds – even if half of its exits are disabled.