If you’re handed a fiver as part of your change, you may be lucky enough to spot a familiar World Cup hero, after four £5 notes engraved with Harry Kane’s face were released at various spots around the UK.

Artist Graham Short engraved six £5 notes with Harry Kane’s face after the England captain won the Golden Boot at this year’s Fifa World Cup – one to celebrate each goal he scored. One note was given to Kane and another to the FA, but a further four were released into wider circulation.

Here, we take a look at how much the notes are likely to be worth and whether there are other fivers worth a fortune in your change.

How to spot a Harry Kane £5 note

To spot Harry Kane on your note, you’ll need to look closely – the tiny image has been engraved in the clear plastic window on one side of Big Ben, with the words ‘World Cup Golden Boot winner 2018’ on the other. 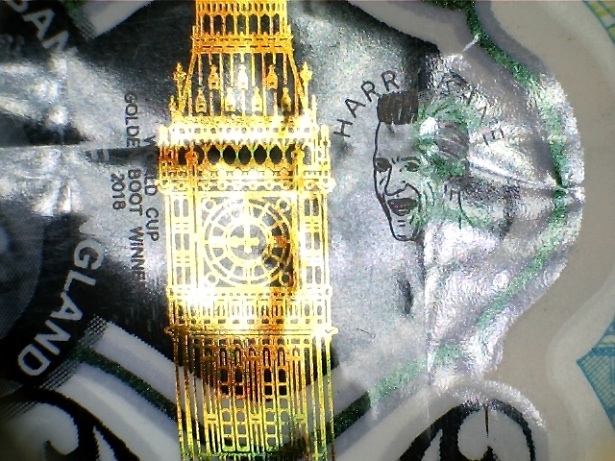 The serial numbers of the notes have been confirmed as:

Where to find a Harry Kane £5 note

Micro-engraver Graham Short spent the notes in shops around the UK, to give the public a chance of finding one for themselves.

One was given out in the small village of Meriden, in the West Midlands, while another was spent at the Elephant House in Edinburgh, the coffee shop where JK Rowling started writing the Harry Potter series. A third was spent in the Welsh mining town Merthyr Tydfil, where the artist’s father was born, and the last is intended for Northern Ireland, though a location has not yet been confirmed.

Mr Short, working with the Tony Huggins-Haig Gallery, was inspired by the England team’s performance during the World Cup.

He previously hit headlines by engraving a portrait of Jane Austen on £5 notes to mark the 200th anniversary of her death. The artist is also known for producing a portrait of the Queen on an eye of the needle, which sold for £100,000.

How much is the Harry Kane £5 worth?

There are just four Harry Kane £5 notes currently circulating. And given the popularity of the England striker, especially at the moment, the notes are likely to fetch a hefty premium.

Each of the designs is insured for £50,000, Mr Short told the Metro. But there’s no guarantee of how much the notes would sell for at public auction.

To date, none of the notes have been offered for sale.

The value of Mr Short’s Jane Austen artwork may give some idea of the popularity of these pieces. One of these engraved notes fetched £6,000 at an auction to raise money for Children in Need, after being returned to the gallery by a mysterious benefactor.

If you’re planning to create your own ‘engraved’ banknote though, think twice – defacing a banknote is technically a crime under the 1928 Bank Act.

Harry Kane may be the man of the moment, but banknotes with less obvious appeal have also fetched a premium in the past.

Low serial numbers are sought-after by collectors, with those starting with A01 particularly prized. It’s extremely rare to find a note with a serial number below 30, and notes with less than 200 are likely to be in demand.

But keep in mind that collectors are usually looking for notes in pristine condition. So any rips, stains or creases will seriously detract from a note’s value.

You can find out more in our story on how to spot a valuable note.

The rise of phone scams – the menace lurking on your landline