We’ve now reviewed flagship OLEDs from all the leading brands. The OLED55C8PLA from LG, the KD55AF8 from Sony and the last but not least (or is it?) the TX-55FZ952B from Panasonic.

Panasonic was a little later than the other two in releasing its eye-catching set, but now we have a complete picture of OLEDs in 2018. Do they still earn their reputation for the very best picture quality outside a Hollywood editing suite, and how does the TX-55FX952B compare to its rivals?

As well as two new OLEDs from Panasonic – we also reviewed the TX-55FZ802B – our experts put the the curved Samsung QE55QCN QLED through our tough tests alongside some Super UHD LG LCD TVs. 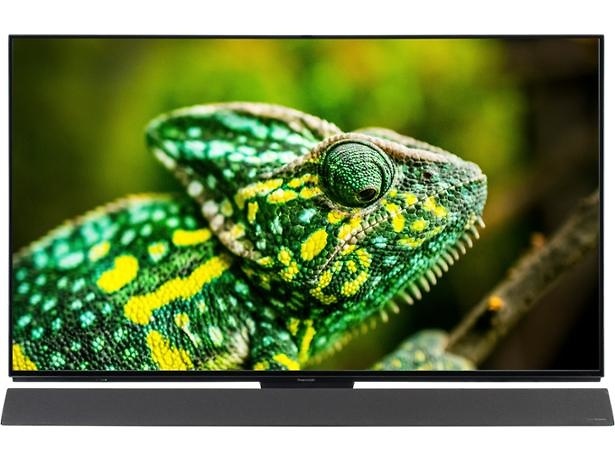 OLED is all about picture quality. The screens are filled with tiny, self-emitting LEDs that can turn themselves off to display true blacks. It also means there’s very little colour-bleeding where bright areas of the screen blend into darker ones making both areas look indistinct. It’s this control OLED screens have over light that makes them the darling of TV manufacturers. Of course all these plaudits are about a technology, not a TV. A good set needs to be built around these high-end displays, they won’t carry an inferior model to a Best Buy score.

The TX-FZ952B is Panasonic’s second stab at an OLED TV after last year’s TX-55EZ952B and the first thing you’ll notice isn’t the screen, it’s the speakers. Normally they’re hidden away behind an attention-grabbing display, but they’re hard to miss on the FZ952B housed as they are in a wedge shaped sound bar that Panasonic calls ‘The Blade’. It’s distinctive and gives the impression that the TV will sound better than one without a separate bank of speakers. Housing them in the body of the TV is no bad thing of course. If all TVs with this set up sounded bad then we’d be desperately short of Best Buys.

An OLED screen, sound bar speaker set up, access to smart apps and the latest HDR formats that can adjust contrast dynamically on a scene-by-scene basis are all welcome, but with a lofty price tag of £2,500, expectations are through the roof for Panasonic’s OLED sequel.

The TV needs to be exemplary and it also needs to stand out in a room with a Sony AF8 and LG OLEDC8. Does it have what it takes? Read our Panasonic TX-55FZ952B review to find out. 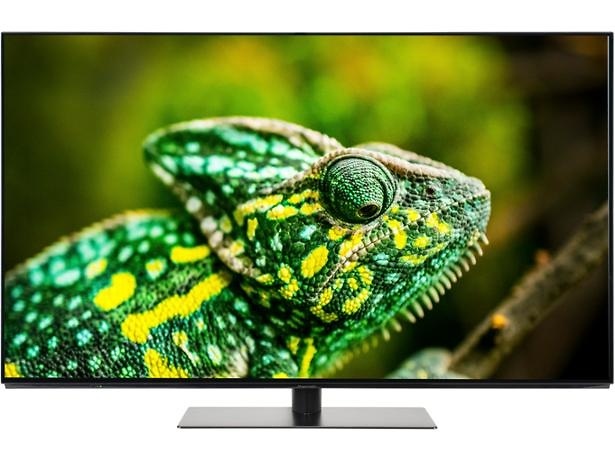 You’d think that would make the sound worse, but that’s not always the case. Some of the best sounding TVs we’ve ever tested put their speakers behind the screen. Speakers aside, both Panasonic’s OLEDs are very similar. They have the same screen, interface and they support the same HDR formats.

Can you save yourself £200 by buying the cheaper OLED or is the 952B the top-choice? Find out in our Panasonic TX-55FX802B review.

Samsung still doesn’t make OLED TVs, it makes QLED TVs instead. Similar acryonyms, but very different technology. QLEDs work more like conventional LCD TVs, but rather than the backlight hitting liquid crystals they hit a layer of quantum dots instead – hence the Q. 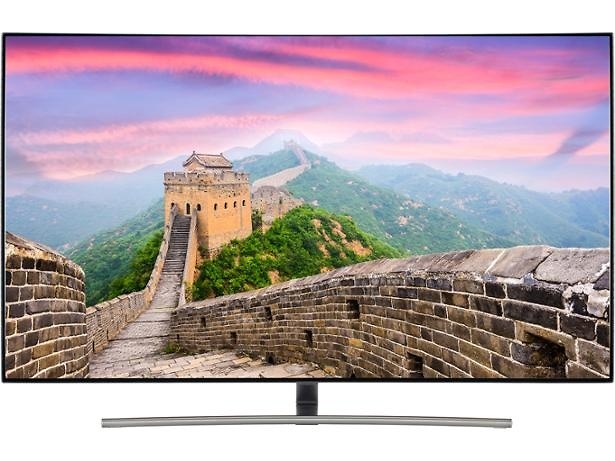 Not only is Samsung the only major brand making QLED TVs, it’s the only one making curved ones, too. The Q8CN is a stunner: brushed metal as far as the eye can see – including the remote – but despite its shininess it’s actually designed to blend in. The bezel is narrow, the stand is minimalist, and the technology in the TV helps it go incognito in your living room. The screen can mimic the wall behind it when you aren’t watching something and all the inputs are in a separate box connected to the TV by one thin, transparent wire, so you won’t have an unsightly cables ruining the clean aesthetic of the Q8CN.

QLED TVs have many of the same limitations as LCD TVs. The backlit screen means contrast can suffer and light areas of the screen can bleed into the dark ones, but it has benefits, too. QLED TVs can be brighter, which works well with newer HDR formats that take better advantage of brighter screens. The quantum dots are capable is displaying intensely vivid colours, too.

We’ve encouraged people to buy flatscreen TVs over curved ones in the past due to the angle causing more reflections on the screen, but has Samsung managed to perfect the technology in 2018? Read our Samsung QE55Q8CN review to see if this high-end set fixes the problems of curved TVs and if its quantum dots get the better of OLED displays.

Is it still worth buying an LCD TV?

If you’ve got a lot of money to spend and you want the best of the best, should LCD TVs be in the mix? We’ve been busy extolling the virtues of OLED displays, so does that mean LCDs are out of the running when it comes to buying a top-rated TV in 2018?

LG has one of the broadest ranges of TVs in 2018. From Full HD sets and its entry-level Ultra HD 4K TVs to its Super UHD 4K TVs and the OLEDs at the very top. It’s easy to identify one of LG’s Super UHD LCD TVs because they have SK in the model name.

Being part of the Super UHD family means these two TVs get some extra features. A sleeker design and the inclusion of the Magic Remote are the most clear differences between LG’s high and low-end TVs. The Magic Remote has a few neat tricks, including an on-screen pointer, which makes it easier to type and select things on the TV, and a microphone, which can be used to issue voice commands, such as searching for content, changing picture settings and searching the internet.

It’s not all external improvements though, both these TVs are compatible with extra HDR formats, including Dolby Vision, which can adapt contrast on a scene-by-scene basis and Technicolor, which isn’t used much at the moment, but will be able to upscale non-HDR content.

Of course, the improved contrast offered by HDR is very situational. There still isn’t an enormous amount of HDR content outside of 4K Blu-rays, video games and streaming services, and for a TV to get top marks in needs to exhibit the same level of picture prowess in SD and HD footage as it does in 4K and HDR. Do either of these TVs impress enough to get Best Buy scores, or do the limitations of LCD screens hold them back? Find out in our review of the LG 55SK8100PLA and LG 55SK8000PLA. You can also see what we thought of the smaller 49-inch versions (LG 49SK8100PLA and LG 49SK8000PLB).

Best Buy TVs – browse all the top models from our tough lab tests.