For coin collectors, one of the biggest prizes is a Kew Gardens 2009 commemorative 50p, currently considered one of the rarest designs in circulation. But another coin, the 1992-93 EC 50p, which has a lower mintage, may be even harder to find.

Which? explains why this coin is considered rare and how you can spot one.

The EC coin was issued between 1992 and 1993, during the period that the UK held the presidency of the Council of the European Union.

But only a limited number were ever produced – Royal Mint figures show that just 109,000 were minted, the lowest of any 50p released since 1968, when the first decimal coins were introduced.

By comparison, the Kew Gardens 50p, with its design of a pagoda encircled by vines, and commemorates the 250th anniversary of the Royal Botanic Gardens – generally considered by coin collectors to be one of the most valuable – had a mintage of 210,000.

However, the EC coin won’t just turn up in your change. As one of the older-style 50p’s, it was withdrawn from circulation in 1997.

This means that the odds of finding one are even lower, making the idea that this rarity might be lurking at the bottom of your piggy bank even more exciting.

Rare coins are only worth what a collector is willing to pay for them – but a hard-to-find coin will often attract a premium.

Given its scarcity, the EC coin tends to be one of the coins that sells for more.

One EC coin recently sold for £56 after attracting 20 bids – over 100 times its face value.

Meanwhile, a collectable silver proof version, still in its original case, sold for £53.30 in August.

The sales price makes it just a little less valuable than the much sought-after 2009 Kew Gardens 50p, which can fetch up to £75 on eBay.

Scarcity aside, coins with a significant meaning or an especially beautiful design tend to be more sought after that others. For this reason, it’s possible the EC coin will grow in value as the Brexit debate raises interest in European politics.

The EC coin is heavier than modern 50ps and has rounder edges.

It features 12 chairs around a negotiating table, with the UK at its head. In the centre are 12 stars representing the European Union’s original member-states, all of which are connected to the seats. 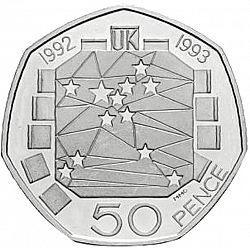 But don’t confuse it with the 1998 coin that also celebrates the UK’s Presidency of the Council of the European Union, and which features a starburst with 12 stars.

The European Single Market refers to the idea of European nations as one territory with no internal borders or obstacles to trade – and 31 December 1992 was set as the deadline for the completion of a single market. In the same year, the UK served as the president of the Council of the European Union, and again in 1998.

What are the rarest 50p coins in circulation?

The EC 50p has been de-monetised and withdrawn from circulation, meaning it’s only likely to turn up in old coin jars or with coin collectors.

But there are plenty of rare coins that are still in the market, so one could pop up in a handful of change at the shops.

You can see the full list of coins in circulation with the lowest mintages in our diagram below – with Kew Gardens far and away the hardest to find.