The latest smartwatches are a veritable bag of tricks on a wrist: offering access to phone and fitness tracker functions, sending sports and weather updates, even having breathing exercises. All these features are designed to make our lives easier, and for them we pay handsomely. But a smartwatch is no use to us when the battery’s dead.

Enter the Samsung Galaxy Watch. It’s an elegant, traditional-looking wearable with a pleasing mix of smart and fitness features, including the ability to receive and reply to phone calls, emails and WhatsApp messages, make contactless payments, play music, help you out with Samsung’s voice assistant Bixby, measure your heart-rate and more.

There are two versions of the Galaxy Watch. The smaller, which comes in rose gold or midnight black, has a 42mm screen and costs £279. The larger version, which comes in silver and has a 46mm screen, costs £299. A 4G model, which will let you make and receive phone calls without your smartphone nearby, is due out later this year.

Crucially, the watches have a new type of battery, which has been heavily marketed: 270mAh for the smaller watch and 472mAh for the larger watch. According to Samsung, one charge will keep the 42mm watch going for four days, and the 46mm version going for seven.

How long does the battery on a smartwatch last?

If you’ve looked for a smartwatch with a nice long battery life, you’ll have seen big variations between what’s on offer. That’s partly due to the quality of the watch and partly because manufacturer claims are based on different (but often light) usage scenarios.

For example, Huawei has just announced a watch that it says will last a month on a single battery charge – with all the features turned off.  With activity tracking features turned on all the time – which is more likely how you’d be using it, Huawei says 22 hours.

Our tests are based on consistent, real-life scenarios. The longest battery life of any smartwatch we’ve tested was three weeks – and the shortest was two days.

You can see the range of battery claims on offer from the selection of key models below. 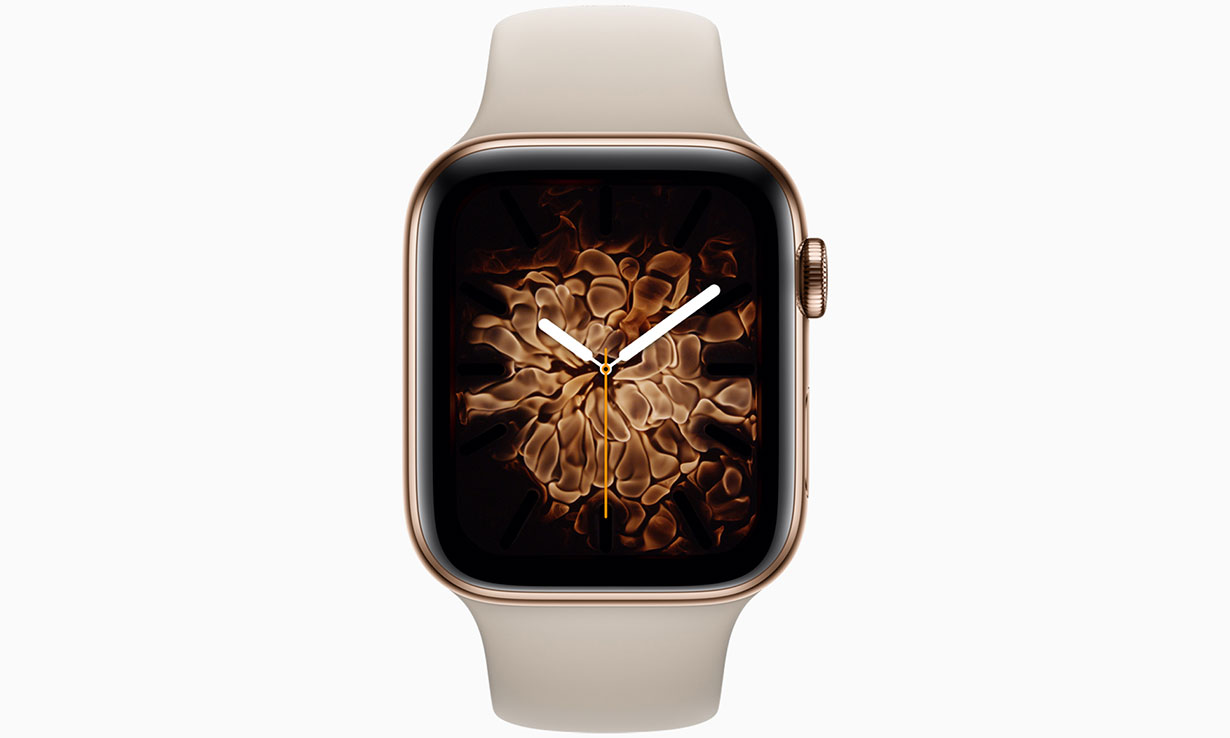 The new Apple Watch Series 4 lasts, by Apple’s own admission, a mere 18 hours. Granted, it does pack a lot of features into a small device: GPS, a 30% larger screen, new animated watch faces, the ability to detect falls and call emergency services on your behalf, three new FDA-approved heart monitors and a Walkie Talkie feature, to name but a few.

Nevertheless, it’s disappointing that the battery life isn’t longer – especially given how much you’re paying for it. So it can’t quite ever be ‘an essential part of people’s lives’, as Apple described it at the launch, as using it becomes a stop-start experience. It means, for example, you can’t use it for sleep tracking if you’re going to have to stick it on charge every other night. The Series 4 doesn’t have a native app for sleep tracking, but you could have installed a third-party sleep tracking app.

But that might not matter to you – it really depends why you’re buying it. Part of the reason for buying an Apple Watch is undoubtedly to feel part of the Apple community and have a fashionable piece of tech on your wrist – so the regular charging may seem like a small sacrifice.

Read our first impressions of the Apple Watch Series 4. 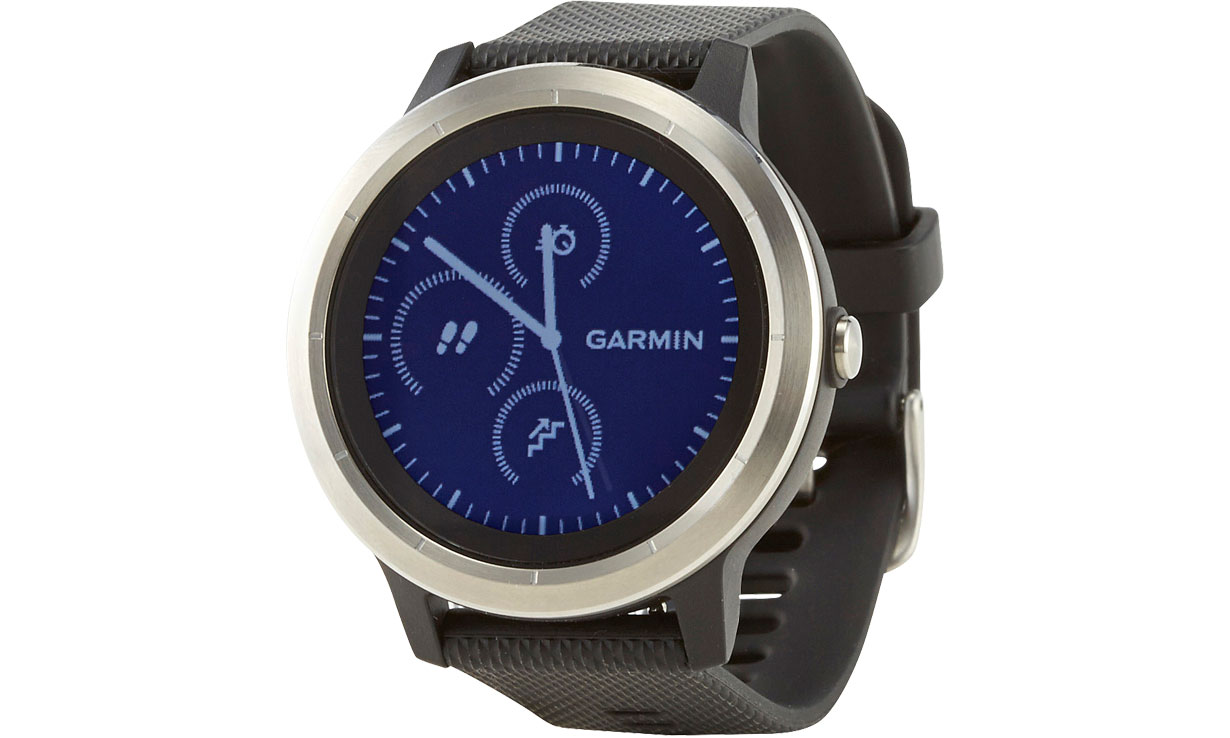 This GPS smartwatch has a lot going for it, including a touchscreen resolution of 240 x 240 pixels, covered by hard-wearing Gorilla Glass, a plethora of sports, fitness and smart functions and NFC for making payments with Garmin pay (if your bank is compatible). If you’re serious about sports training, its ability to take VO2 max measurements, using your heart rate to calculate your oxygen consumption and fitness levels, could also appeal. And it’s compatible with both Android smartphones and iPhones. 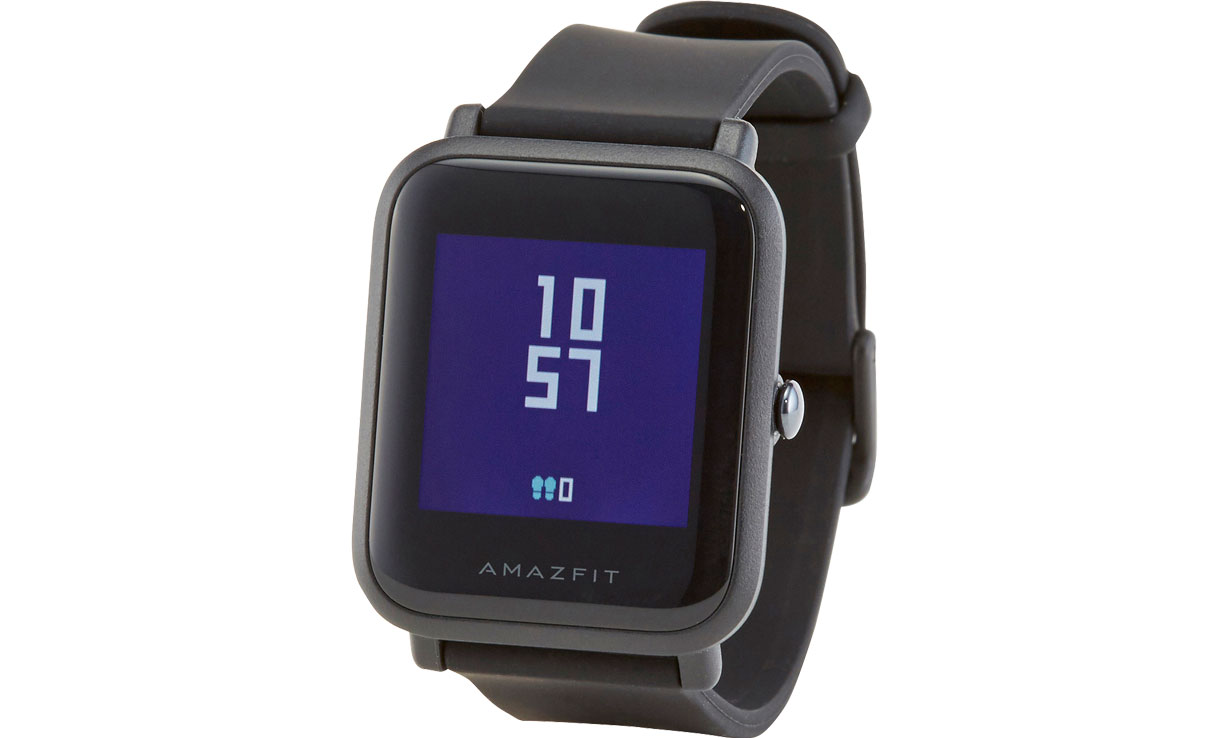 The Amazfit Bip is first smartwatch you can buy in the UK from Chinese manufacturer Huami, which also makes Xiaomi devices.  Huami claims that the Amazfit Bip will last up to 30 days with regular use, and up to 45 days with minimal notifications. That’s around 11 times as long as the Fitbit Versa (below).

It’s lightweight and comfortable to wear, and with its rectangular bezel, it looks from a distance like a member of the Apple family. It doesn’t have anywhere near as many smart features as an Apple Watch, nor other smartwatches, but you can still receive texts, calls, emails and social media notifications. It has built-in GPS, a decent range of fitness sensors, a heart-rate monitor, barometer for measuring altitude and various other good features.

At just £60, it could be a real bargain. We reveal whether or not that’s the case in our full Amazfit Bip review. 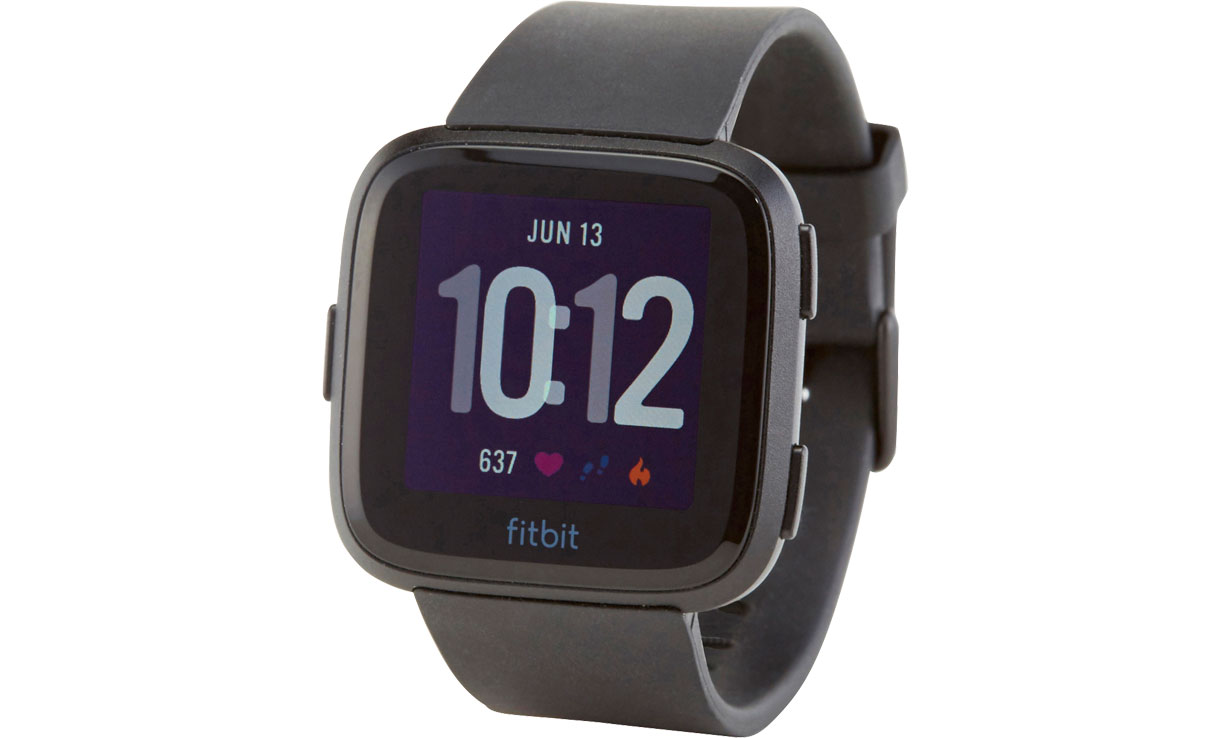 The Versa is the second smartwatch from Fitbit; the first was the Ionic, launched in 2017. Fitbit claims that the Versa (£178) will give you four days of battery life per charge. So you’ll only need to charge it twice a week, if that.

The longer battery life means that, unlike with the Apple Watch, you could use it for measuring your sleep patterns (and, unlike the Series 4, the Versa has a native app for this, which can even monitor sleep apnoea).

The longer battery life is partly down to the fact that there’s no GPS – meaning you can’t leave your phone behind when you’re out for a run and still expect your watch to track it. The Versa doesn’t have as many smart features as the Series 4 or the Galaxy Watch either. Like the Amazfit Bip, it lets you receive texts, calls, social media and calendar notifications, but not reply to them.

Head to our Fitbit Versa review for our full verdict.

Hybrid smartwatches have a smattering of smart and fitness features (buzzing when you receive a text or email on your smartphone, and sometimes basic step tracking, for example) but by no means as many as a true smartwatch. Head to our guide on hybrid smartwatches to learn more about them.

How to extend your smartwatch battery life

Here are a few more ways to eke some more precious life out of your battery: 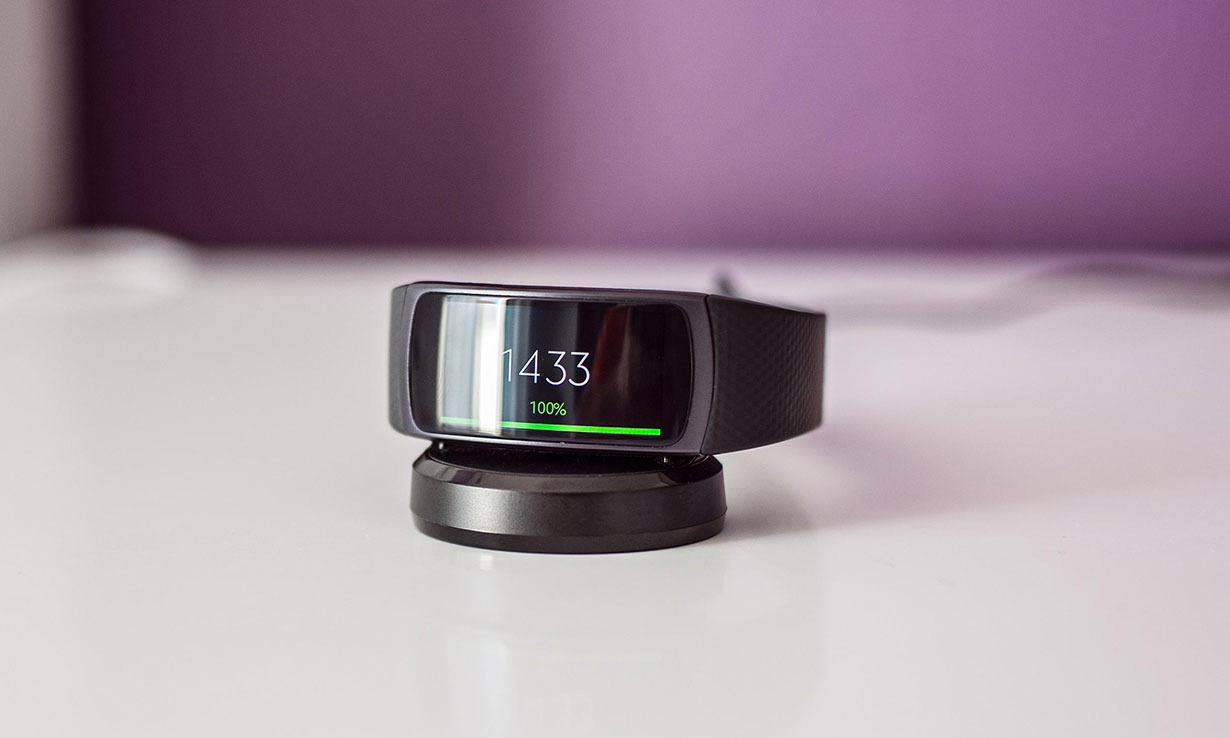 How Which? tests smartwatches

For every smartwatch we review, we test battery life in a range of daily scenarios, both in our lab and in the outside world. We send 11 phone calls and 35 texts to the watch across the day, and a range of social media alerts.

We also check how long it takes for the battery to fully charge. Some go from dead to 100% in less than an hour, while others take as long as three hours.

And we test how much juice you’ll get from a quick charge. That way if you’re heading out soon and your smartwatch is dead, you know whether it’s worth quickly popping it on charge for a bit. From some you’ll get as much as 43%. From others, you’ll get as little as 19%.

A smartwatch needs to score 72% to be a Which? Best Buy. Battery life accounts for 10% of that.

Check our smartwatch reviews to make sure you spend your money on a smartwatch with a decent battery life. Choose one that scores at least four out of five stars for battery.