Older football fans off to see home games at West Ham United, Cardiff City, Manchester City and Huddersfield Town this weekend can enjoy the game safe in the knowledge that they are getting a great deal on their discounted season tickets.

Exclusive research carried out by Which? has uncovered which Premier League clubs offer the biggest discounts to senior fans (usually aged 65 and over).

Tickets at Liverpool, Spurs or Arsenal were found to be among the steepest for ‘seniors’ in the analysis, while Manchester United topped the table for the biggest season ticket discount for older football fans.

A version of this article first appeared in Which? Money magazine. Take a two-month trial for £1 to read the full version.

West Ham leads the way with the cheapest senior season ticket on offer at the London Stadium costing just £160, which works out at an incredibly cost-effective price of £8.40 per game to watch the Irons.

Cardiff City (starting from £169), Manchester City (£205) and Huddersfield Town (£249) also offer fan-friendly rates for long-serving supporters. The Terriers, in fact, charge all adults a price of £249 or the equivalent of only £13.10 per fixture. Cardiff City’s senior discount actually starts at age 60.

Football heavyweights Liverpool (£514), Spurs (£397.50) and Arsenal (£378.50) charge high prices when it comes to the cheapest season tickets available to the over-65s. The Spurs fee is for its yet to be occupied new stadium.

Fulham initially froze its 2018-19 season ticket rates, but then pushed through considerable price hikes after promotion from the Championship via the playoffs at the end of May.

Older Liverpool supporters pay exactly three-quarters of the full adult price wherever they sit in the ground. This means that the cheapest senior season ticket at Anfield costs in excess of £500 to sit in the Kop End.

Which? Money analysed season ticket (2018-19) and membership (2018) prices in all the various stands for major football, rugby and cricket clubs to find out which offer their older supporters the best deals.

Visit the full Which? guide to the perks and benefits of retirement. 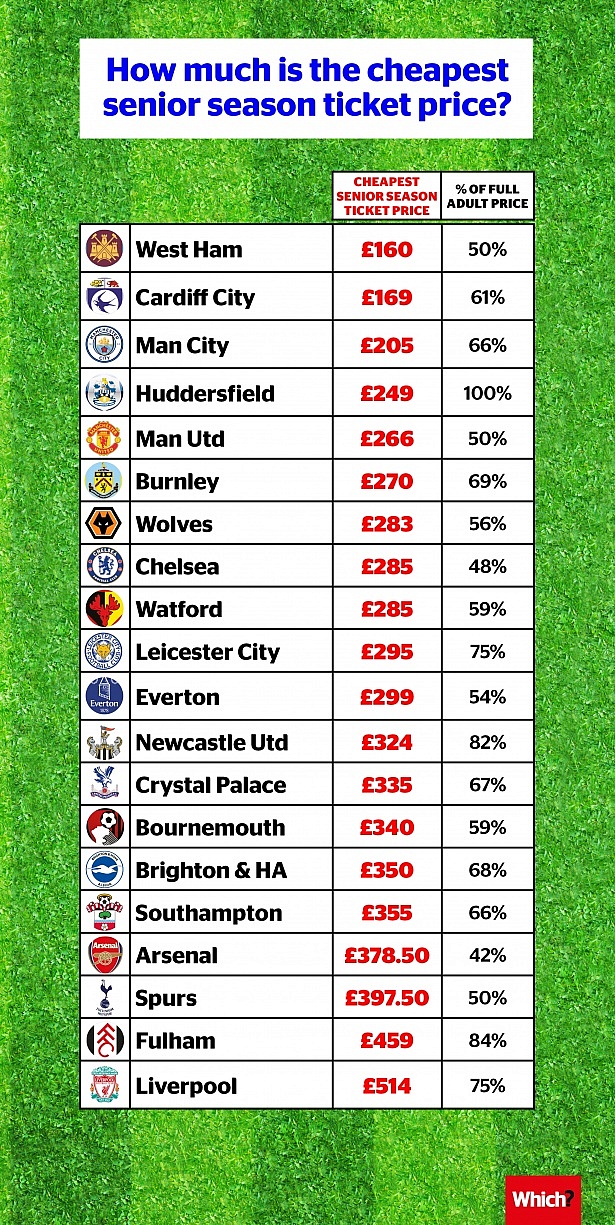 As part of the research, we also calculated the average price that older fans pay as a proportion of a comparable full adult season ticket.

Manchester United may not offer the cheapest 65-plus season tickets or play the most attractive football these days, but you’ll get a healthy discount wherever you sit in Old Trafford, paying no more than 50% of the full adult rate.

A 65-plus Manchester United season ticket behind the goal at the Stretford End costs from just £266.

Older Arsenal fans only pay 42% of the full price to sit in the family enclosure of the Emirates Stadium – the only section where a senior discount is available – but this is still a substantial outlay when the full price is a hefty £894 per season.

Newcastle United stands out as offering measly average discounts (across all stands and not just the cheapest senior tickets) for older fans. So much for rewarding the fervent support of long-suffering members of the Geordie Nation.

Football season ticket prices were checked in the middle of July 2018 (when most ‘early bird’ deals had expired).

The average cheapest senior season ticket at Premiership rugby clubs was £213, compared with £301 for football teams and £197 for the professional cricket counties.

Discounts on county cricket club memberships are smaller – perhaps because they’re arguably most suitable for older fans who have free time in the week and the initial price of memberships is usually fairly inexpensive.

Middlesex CCC and Northamptonshire CCC were the joint-highest with a membership price of £265. Half of the 18 cricket counties we analysed offered no discount at all to older members.

Eight ways pensions are about to get better