The Financial Conduct Authority (FCA) has published a scathing report on home insurers’ pricing practices – highlighting serious concerns about whether consumers are being fairly treated.

As a preliminary step to a broader insurance investigation, the government watchdog has reviewed the approaches to pricing and storage of customer data of 18 home insurance firms, representing around 40% of the UK home insurance market.

The FCA reported three key areas presenting ‘the most potential for significant harm and poor outcomes for consumers.’ These were:

Who is worst off from home insurance pricing?

Price data analysed as part of the study revealed ‘widespread evidence’ of differential pricing within home insurance, meaning customers who’d stayed with their insurer for many years paid significantly higher margins (the price you pay above what it actually costs to cover you), on average, than newer customers.

According to the report, groups likely to be disadvantaged included over-65s, people paying monthly rather than annually, auto-renewing customers, those who’d made previous claims and those who had buildings-only insurance.

Meanwhile, customers likely to benefit from differential pricing were those who shopped around regularly. Private renters with children, customers with low credit scores, unemployed renters and those with contents-only insurance were often part of this group.

The longer customers have been with their insurer, the higher the margin, on average. The chart below shows the average margin (proportion of their premium above cost) paid compared with the number of times the policyholders had renewed with their insurer.

How much loyalty can cost you 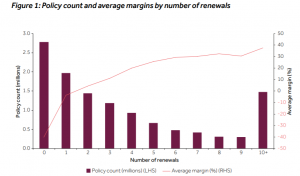 In May, industry trade bodies the Association of British Insurers (ABI) and the British Insurance Brokers’ Association (BIBA) jointly released a statement that insurance companies would review their pricing models to ensure longstanding customers weren’t being disproportionately penalised for their loyalty.

In particular, they’ve pledged to take measures to ensure that ‘vulnerable’ customers – such as those less capable at managing their finances and shopping for deals – would be protected.

In their report, the FCA raise concerns about how well co-ordinated insurers’ efforts have been to track of how their pricing strategies affect customers over the long term. They also express doubt on how well-equipped insurers are to determine which of their customers might be paying excessively more than they should be, with some firms reporting that they don’t keep information on their customers (besides their age) that would allow them to identify who might be vulnerable.

Additionally, in many cases, records of older policies are reportedly stored on separate ‘legacy’ computer systems than those for more recent customers, making it challenging (or in some cases, impossible) for insurers to make systematic comparisons of newer and older policies and pricing.

The FCA states a further concern over some companies using data (for example census data) to directly or indirectly factor policyholders’ race or ethnicity into their pricing models. This could potentially place them in a legal grey area under the Equality Act 2010. Under this legislation, insurers are prohibited from taking into account several ‘protected characteristics’ – such as race or religion – in setting their prices.

The ABI has commented: ‘While many customers benefit from competitive motor and home insurance markets with lower premiums, we agree that the market is not working as well as it should for some long-standing customers. Insurers were the first sector in the economy to launch an industry-wide initiative to tackle excessive price differences between new and existing customers earlier this year, and the FCA has welcomed this. This is an important issue and insurers will work with the FCA to address issues raised in the report to ensure that the market works as well as possible for all consumers.’

The industry body is set to publish its own report on differential pricing and vulnerable customers in around two years time. The FCA is carrying out a market study of general insurance more broadly, with a final report expected in December 2019.

In May, Which? investigated the premiums being paid by longstanding and new home insurance customers and found that policyholders with a new combined home insurance policy paid, on average, £75 less per year than those with older policies.

Gareth Shaw, Which? money expert, said: ‘This review is long overdue. For years, loyal policyholders have been exploited by insurance providers, punished by excessive premiums, and have had to battle with unclear pricing that makes it difficult for people to understand whether or not they’re getting a fair deal.

‘Customers who prefer to stay with one provider are at risk of being hit with vastly overpriced premiums when little has changed in the service they receive. It’s right that the regulator tackles this sector to ensure customers aren’t punished for their loyalty and that pricing is clear and transparent across the industry.’

How to avoid being caught in the loyalty trap

Most of us know that staying put with one insurer will cost us money, but will tolerate paying a little extra to avoid the hassle switching to a new policy.

Getting the best deal doesn’t always need to mean going elsewhere. Follow our tips to keep paying a fair price.

To find out more, read our guide on how to renew your home insurance policy.