Average interest rates offered to savers on cash ISAs and variable savings accounts are now lower than just over two years ago, despite the Bank of England (BoE) base rate rising in that period, Which? Money has found.

Theoretically, an increase to the base rate would encourage lenders to offer more attractive savings deals, but Which? analysis has found the opposite to be true.

We explain how rates have decreased over the past two years and how savers can find the best deal.

Nearly every major bank or building society offered worse interest rates on variable savings accounts in November 2018 than they did in August 2016, Which? found, meaning savers are getting lower returns on their deposits.

At the same time, the average standard variable rate (SVR) on UK mortgages has risen broadly in line with the base rate, so some homeowners are paying more for their loans.

This graph shows the percentage point change in all variable savings accounts for £10,000, variable cash ISAs for £20,000 and SVRs plotted against changes to the base rate since August 2016. 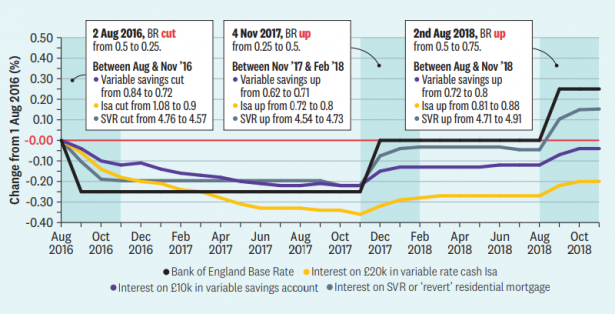 The yellow and golden lines show that the interest paid on variable savings accounts and ISAs fell in line with the 2016 base rate cut but never recovered to the same levels.

Meanwhile, the average of all SVRs moved from 4.76% in August 2016 to 4.91% currently. Approximately one in four mortgage customers pays their lender’s SVR.

Acting Which? Money editor Ceri Stanaway said: ‘A significant gap is emerging between the higher rates applied to many mortgage holders and the reduced rates paid out to savers by most banks and building societies. It’s leaving many customers short-changed.’

What is the base rate?

The Bank of England base rate is the interest charged to banks or building societies when they borrow from the central bank. Governor Mark Carney and his colleagues at the Bank of England set it to manage the UK economy: base rates are cut to boost growth and raised to control inflation.

Conventional wisdom suggests that when the base rate rises or falls, these changes will be passed on to borrowers and savers. But this has not happened.

How wide is the savings gap?

Our findings show that variable savings rates have fallen while SVRs have risen. One way to think about this is as a widening of the ‘savings gap’.

The table shows the changes in the average interest paid on £10,000 of variable savings and the SVR for residential mortgages at various banks and building societies between July 2016 and November 2018 (during which time the BR increased by 0.25% overall). The final column shows the difference between the two changes – or the savings gap.

The major players nearly all kept their SVR more or less in line with the base rate changes during the last few years (with Yorkshire Building Society as the notable exception).

However, adjustments to savings rates have been far less consistent. Around half of the providers we looked at (and most of the major ones) saw a reduction in the mean average interest rates paid on their savings accounts over the period, while half made increases – but usually not enough to close the gap.

We calculated the mean average of the interest rates on all variable rate savings accounts at each bank, not including junior accounts or ISAs. Our analysis does not capture the proportion of customers on each account as we don’t have access to that information.

TSB had the biggest savings gap. Our research found that its savings accounts offered, on average, 0.44% lower interest in November 2018 than it had in July 2016.

That said, this result was influenced by a two-year tracker bond offering high interest in July 2016, which was not available two years later. Without this account, the bank would have finished mid-table.

Cumberland Building Society and Danske Bank increased average savings rates more than their SVRs – what’s known as a negative savings gap – which is a good thing for customers. Danske has actually increased its SVR more gently than the net base rate rise, amounting to a fairly significant savings bonus of 0.11%.

These figures focus on changes, rather than actual rates, so they don’t tell you which providers are currently offering the best rates. A bank that’s dropped its savings rates significantly may have started off with a higher rate than others that have made smaller cuts.

How to find the best savings rate

With savings rates at historic lows, even the most eagle-eyed customers will struggle to find a decent reward from a traditional savings account compared with a decade ago.

Nonetheless, it’s important to shop around for the best possible home on your savings.

If your nest egg is earning a lower rate than inflation – which was 3.1% in November – then it’s losing value in real terms.

To earn an inflation-beating rate, you may need to lock your savings away in a fixed-term bond – although if you need access to your cash, this might not be the right option for you.

A version of article appeared in the January 2019 issue of Which? Money. You can join Which? today to receive monthly magazines, access to product reviews and more.