Fitbit has launched the latest activity tracker in the Charge range, the Fitbit Charge 3. It’s slim, stylish and comes with a wealth of features. Hot on its heels is Garmin, rivalling the Charge 3 with the Vivosmart 4.

The Fitbit Charge 3 and Garmin Vivosmart 4 are two of the most technologically advanced activity trackers you can get your hands on, even verging into smartwatch territory with some of their advanced features.

Both look great, so they should appeal to the fashion-conscious as well as fitness fans. Price-wise, they’re also comparable. The Vivosmart 4 costs £120, and the Charge 3 comes in at £10 more.

So many similarities, but is there much to choose between them? The answer is yes – one outscored another significantly in our tests.

Want to get straight into the details? Go directly to our full reviews of the Fitbit Charge 3 and Garmin Vivosmart 4. 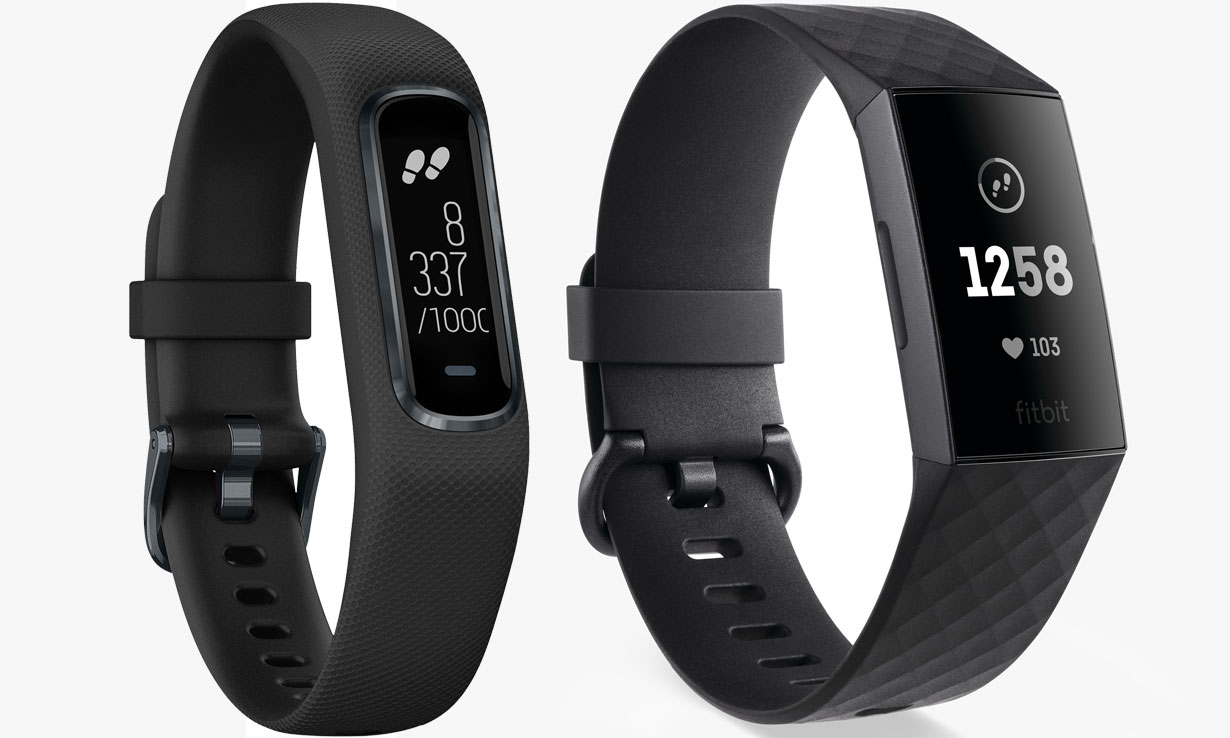 If this is your first foray into the world of activity tracking, banish any thoughts of chunky, ugly devices you’d only consider wearing at the gym. These trackers look like cool unisex bracelets that you’d actually want to wear.

Their designs are subtle enough to blend in with pretty much any outfit, and their bands come in neutral, understated colours, as well as brighter, snazzier ones: black and grey or blue and rose gold for the Charge 3 (you can get special edition woven or leather bands too), blue, grey, black or berry for the Vivosmart 4. They’re both slim and lightweight: the Charge 3 weighs just under 28g, and the Vivosmart 4 just 17g.

One thing to note: if you want to switch up your style (or the band breaks), you can buy bands for the Charge 3 from the Fitbit website, but Vivosmart 4’s design means you’d need to replace the whole device to get another colour.

One had a particularly scratch-resistant screen, compared with the other that scratched easily. With the latter, you’ll find yourself having to take care of it and avoid wearing it during contact sports or activities where it might knock or rub against anything – hardly ideal for something that’s designed to stay on your wrist at all times!

We also found that one of the screens was too narrow to be comfortably readable. That’s an obvious danger for a tracker with such a narrow band. 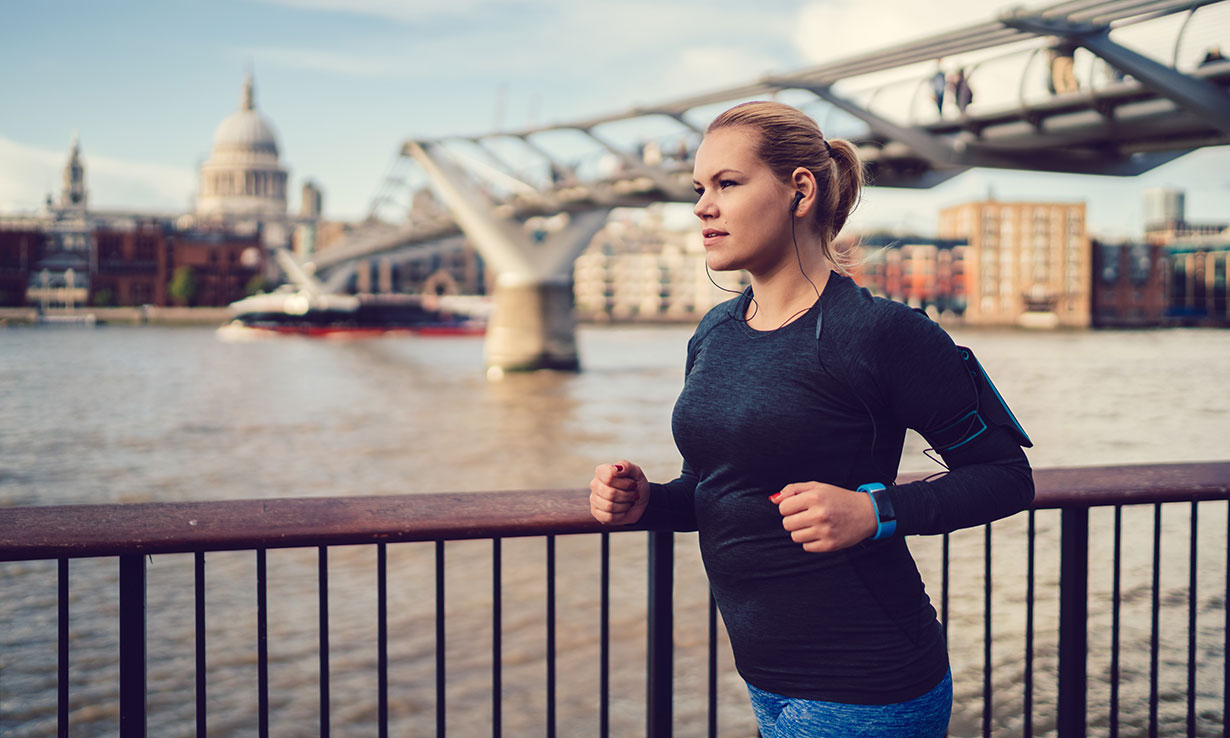 Both can track standard measures such step count, calories burned and floors climbed, but that’s really just the tip of the iceberg.

Both have a built-in heart-rate monitor and a cardio fitness level function that shows your VO2 max measurements. VO2 max – a measurement of how efficiently your cells use oxygen for energy – was once something only hardcore athletes were worried about. An increasing number of wearables have this function, but they tend to be fitness watches, which are pricier. It’s interesting to find this function on an activity tracker.

The Vivosmart 4 will also use your heart-rate data to report on your stress levels. And it has a ‘body battery’ function that tells you how well rested you are, which is handy information to help decide when’s best to exercise. The Charge 3 will also detect when you’re feeling stressed and guide you through calming breathing exercises.

Both will send you reminders to get moving if you’ve been inactive for a while, and messages congratulating you when you’ve reached a goal – a nice feature if you need a little nudge now and again. One tracker was really encouraging, while the other was basically fine but a bit more abrupt.

Both come with a variety of sports profiles. Both are now waterproof for swimming in the pool, but that’s nothing new for Garmin, as the Garmin Vivosmart 3 was swim-proof too. The Charge 3 is the first swim-proof activity tracker in the Charge range, an update that seems long overdue. Like the majority of wearables we’ve tested, neither is suitable for scuba-diving or high-velocity water sports.

Neither has built-in GPS, which would have been valuable for runners. A handful of other activity trackers have on-board GPS, such as the similarly priced Garmin Vivosport (£119).

The Charge 3 can get location data from your phone, so you’ll need to remember to take your phone out running with you. The Vivosmart can’t access GPS data at all, so it lags behind here. It gets its distance calculations from your step count instead. Our tests assessed whether or not that makes it less accurate.

Read more about fitness tracker accuracy and see how accurate each model we test is for steps, distance, calories and heart rate.

Both trackers can help you keep tabs on your sleep patterns, which could be extremely useful if you often struggle to get enough shut-eye and aren’t sure what’s going wrong. You can get a detailed analysis of your sleep pattern from either, but with some differences.

Information you’ll get from the Vivosmart 4 includes how long you slept for, your sleep movement and sleep levels (deep, light, awake and REM). The Vivosmart 4 can also report on your blood oxygen saturation levels using its SpO2 sensor, which could be helpful if you think you’re at risk of sleep apnoea. Don’t rely solely on this, though: it’s not intended to alert you at the time if anything’s wrong, but you can take your data along to your doctor to review.

The Charge 3 will also report on your sleep levels and it too has a SpO2 sensor to estimate changes in your blood oxygen levels. With the Charge 3, you can enter into the app the time you fell asleep and woke up if you think the data collected by the tracker wasn’t correct. It also has a built-in alarm (although not one you can ask to wake you up at the optimum time in your sleep cycle, as with some really advanced wearables). We rather liked these features, and you won’t find them on the Vivosmart 4. 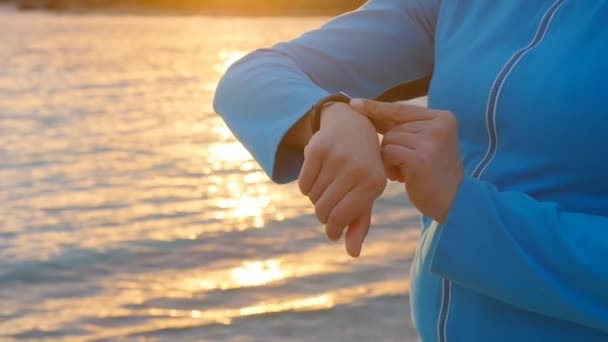 Both come with smart features, which sounds perfect if you’re after something suitable for both health and communication but that is also lighter and slimmer than a fitness watch or smartwatch.

With the Vivosmart 4, you’ll get a notification and vibration on your wrist when your phone receives a text, call, email or social media alert. Android and iOS users will have slightly different experiences here: when a call comes in, for example, Android users can answer or reject it using one of three pre-set messages, whereas iPhone users can only answer or reject it. When a text comes in, Android users can reply with one of five pre-set messages; iPhone users can’t answer it at all.

With the Charge 3, you can view calls, messages, calendar notifications, weather updates and social media notifications on-screen. You’ll get vibrations when your smart notifications come in. However, you can’t respond to them or make phone calls. And there isn’t any music control, which there is with the Vivosmart 4.

Special-edition models of the Charge 3 have NFC for Fitbit Pay (check whether your bank is compatible). This isn’t an option with the Vivosmart 4.

With both trackers you can choose to turn off all the smart notifications (for when you’re sleeping, for example, or going into a meeting and not wanting to be disturbed). But one benefit of the Charge 3 is that you can opt to receive certain types of notification. With the Vivosmart 4, it’s all or nothing.

Both contain rechargeable batteries that are claimed to last seven days. That sounds like nothing compared with activity trackers that have button cell batteries (which last for months and months), but it’s fairly good for a rechargeable battery – assuming that is how much you will achieve. It’s two days more than the Fitbit Charge 2 and Garmin Vivosmart 3 were claimed to have.

Check our full reviews of the Fitbit Charge 3 and Garmin Vivosmart 4 to find out how much battery life we got out of these trackers in our tests.