TV manufacturers will be launching their new ranges for 2019 in a few months. In the meantime, we’ve been testing some exciting TVs from Philips and Samsung that could be among the best we’ve seen over the past year.

Philips may be better known for toothbrushes than TVs, but whenever a manufacturer releases an OLED it’s time to pay attention – and it’s released two.

Meanwhile, Samsung’s QE55Q8DN is a high-end QLED. Samsung QLEDs are some of the brightest TVs on the market. It’s often said that the quantum dot displays on these TVs produce better colours than any other sets, including OLEDs.

In fact, both OLEDs and QLED TVs have a sensational track record in our tests, which means any of these models could be the best TV released in 2018.

Two TVs with similar names, looks and tech, but one is £500 more than other – so what’s the difference?

Philips is a big name in smart home technology and its Hue light bulbs are some of the most popular devices available. These internet-connected bulbs are controlled from a smartphone app and can change to millions of different colours. These ingenious little LEDs line the rear of Philips’ OLEDs and project colour that complements whatever’s on screen. They can also be switched off if you find the effect off-putting.

You can control both TVs with your voice, too. Google Assistant is built in, and pressing the microphone button on the remote opens up a range of commands from adjusting the channel to opening apps and (in some cases) searching for content within them.

The Panasonic TX-55FZ802B and LG OLED55B8PLA are closest to the Philips 55OLED803/12, but both benefit from extra HDR formats: HDR10+ for the Panasonic and Dolby Vision for LG.

Philips’ more expensive OLED, the 903/12, has the following TVs for company: the Panasonic TX-55FZ952B, which also features a built-in sound bar, the LG OLED55C8PLA and the Sony KD55AF8BU. All the big-name OLEDs cost £200 to £300 less than the Philips TV while having similar features, including voice control and advanced HDR formats.

Most high-end TVs are now organic-LEDs (OLEDs). This means the TV has full control over each LED in its display, producing unmatched contrast control and typically very smooth motion.

However, Samsung is still championing backlights and QLED technology. Backlit TVs can be brighter, and the quantum dots in QLED displays do create vibrant colours.

That brings us to the QE55Q8DN, a QLED set that costs about the same as OLEDs from LG, Panasonic and Philips. 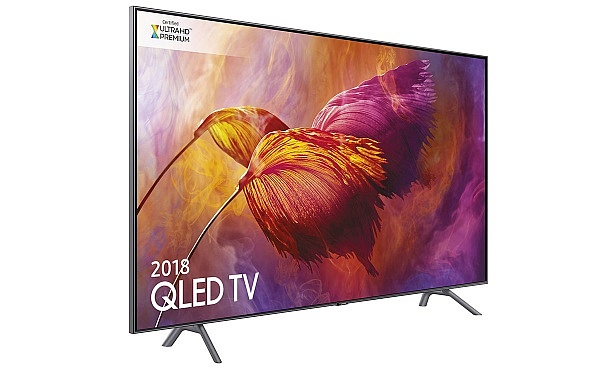 The 55-inch model we tested is £1,699, at the time of writing. That’s not cheap, but it misses out on one of the best features of QLED TVs – a separate connections box, housing all of the HDMI and USB inputs and connected to the TV by one thin wire. This is the only cable coming from the TV, reducing clutter enormously, but the Q8DN doesn’t have it. The Q9FN range above it does and the cheaper Q7FN range does, too, and it’s a real shame to not see it on the Q8DN.

When it comes to picture and sound quality, Samsung is used to ruling the roost, but OLEDs are a massive threat. It’s up to QLED sets like this one to show that Samsung was right to ignore what many consider to be the superior technology.

Read our review of the Samsung QE55Q8DN or all our QLED reviews to see if Samsung was right to stick to its guns with backlit sets.

Best antivirus software deals: Five tips to get the biggest discounts on security for your computer