Internet-only bank First Direct has reportedly become the first in the UK to allow customers to send cash through Facebook and WhatsApp.

The new service is designed to pay friends without needing to login into online or mobile banking.

But could First Direct’s attempts to blend banking with social media spark an increase in online fraud, which is already costing the economy an estimated £10bn a year?

Here, Which? looks at whether First Direct’s new payment service is safe, and what your other options are to send money without using needing someone’s bank details.

How does the First Direct payment service work?

First Direct, the internet-only division of HSBC, has launched a service called fdpay which allows its customers to send up to £350 per day via Facebook and WhatsApp.

You can send cash instantly via the messaging app as long as your phone’s keyboard is in use.

Both the sender and person receiving the money need to be registered with PayM to conduct the transaction.

It means they can transfer any money to PayM users regardless of who they bank with and removes the need to open the banking screen and enter login details.

First Direct is one of around 14 UK banks or building societies which uses the PayM mobile banking payment system.

This allows people to send cash using a mobile number of a fellow PayM user, linked to that individual’s bank account.

How are First Direct customers protected?

To set up the new ‘fdpay’ feature for use on Facebook and WhatsApp, First Direct users will need the mobile banking app and a unique Digital Secure Key, which is either a memorable password or more commonly Touch or Face ID.

First Direct customers will then have to enable a specific keyboard on their mobile phones which displays the ‘fd’ button.

When you’re messaging someone via Facebook or WhatsApp, you can push the ‘fd’ button to send a payment. This will open a separate session away from the social media site.

Each payment will require the person paying the money to enter their Digital Secure Key, and they will select the name of person they are sending to and include a reference.

John James, head of digital at First Direct, said: ‘It’s intended for socially related payments to friends and associates such as bill splitting. We believe it makes those in-the-moment payments easier and that it’s as secure as making payments using the app.’

What happens if phone is stolen?

Customers will be able to contact First Direct which can prevent the feature. First Direct told us that the bank can ‘remotely deactivate the token and invalidate the device’, stopping further payments from being made. 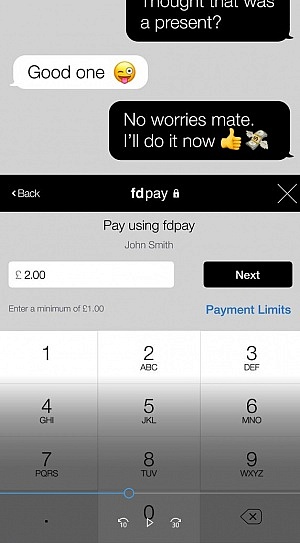 Who else offers social media payments?

Facebook Messenger launched its peer-to-peer payment service in the US in 2015.

Snapchat introduced a ‘Snapcash’ feature in 2014, where users could again send money to each other – but it’s only available on US-registered cards.

Since 2015, Barclays customers using the Pingit app have been able to send money to their phone contacts through iMessage and via their Twitter username – but only if they also have a Pingit account.

An option to send money via Whatsapp, called WhatsApp Payments, was introduced last year however only to a limited number of users in India.

Last year Square’s Cash App, which has seven million active users, launched in the UK on iOS and Android.

Users link their bank account to the app and can send money for free via email to friends, loved ones and colleagues.

The recipient must also download the app and link their bank details.

Venmo, an e-wallet app owned by PayPal and available on iOS and Android, allows users to pay family and friends who also have Venmo, but it only allows US banks accounts to be linked.

Irish payment group Plynk had an app which allowed you to send money to your friends in a message, but the company went into liquidation last year.

Spending Review: five things that were in the small print