Huawei might be better known for its smartphones, but the brand has been in the laptop game for a few years and its new MateBook X Pro is taking a shot at the latest laptops from Apple.

With an identical price to the 2018 Macbook Air and similar slimline appeal, the two could take some separating. Below, we look at which comes out on top, and challenge Apple’s performance in our labs against the rest of the premium market.

For more cream of the crop machines, read our guide to the best laptops you can buy in 2019.

With their retail prices currently identical at £1,199, it makes sense to look at the Huawei alongside Apple’s most recent new laptop, the 2018 MacBook Air. Below are some key specifications as shown in our product comparison tool. 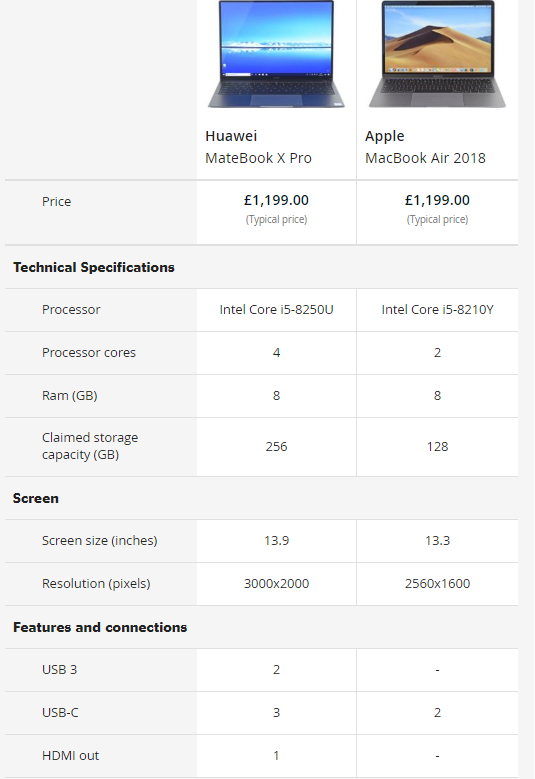 Is the Huawei MateBook X Pro better than a MacBook Air?

They’re both thin and light laptops costing a quid under £1,200, but there are plenty of considerations to help you decide how you want to spend your cash. The first is the difference between the processors on these two laptops.

The Huawei has a quad-core Intel Core i5, while the the MacBook Air makes do with a dual-core model. This won’t make a huge difference in day-to-day tasks, so both laptops should feel zippy enough when opening programs and picture-heavy webpages.

However, during more intensive tasks like exporting a batch of edited photos or rendering an edited video, you will notice the difference between the MacBook Air and Huawei MateBook X Pro: Huawei should in theory, come out on top.

Huawei also seems to have the edge on storage. The smaller capacity on the MacBook may cause headaches if you have a large collection of files that you use on a day-to-day basis, and you’ll pay an extra £200 to upgrade to 256GB and bring it in line with Huawei.

As its name suggests, the Air is very thin and light. Indeed, it’s slightly less than 100g lighter than the Huawei, and it’s also 3mm thinner.

But you get more screen with the Huawei. It has an extra 0.6 inches of diagonal screen space, and also features a screen that’s more square than the MacBook. This is better suited to people who spend more time reading and editing documents, as you’ll be able to fit more lines of text on to the screen at a given time. 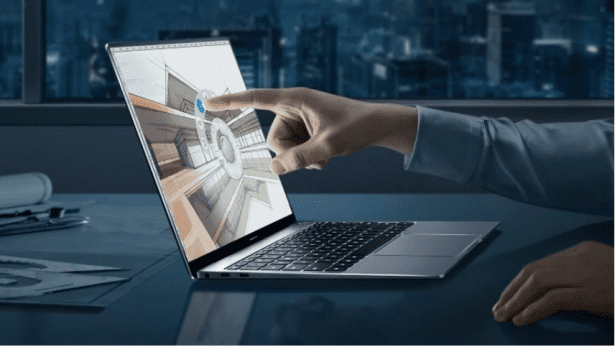 The MateBook X Pro also has a touchscreen, which makes it easier to swipe through pages of documents and can be less fiddly than using a trackpad all the time.

Perhaps the most notable feature of this laptop is its webcam that pops out from underneath the keyboard. This means it’s hidden until you press down on it, at which point it pops up from the keyboard. Other laptops have tried low webcam placements before, most notably the Dell XPS 13, but the ‘up-the-nose’ view of your face that it captures might not suit everybody.

We’ve frequently seen that what sounds good on paper doesn’t always work in practice. Fortunately we have the definitive verdict from our in-depth lab tests. Find out how they fare in our full Huawei MateBook X Pro review and MacBook Air review.

Huawei’s far from the only brand around if you’re considering an alternative to a Macbook of course. Several other premium models spring to mind if you’re weighing up your options: 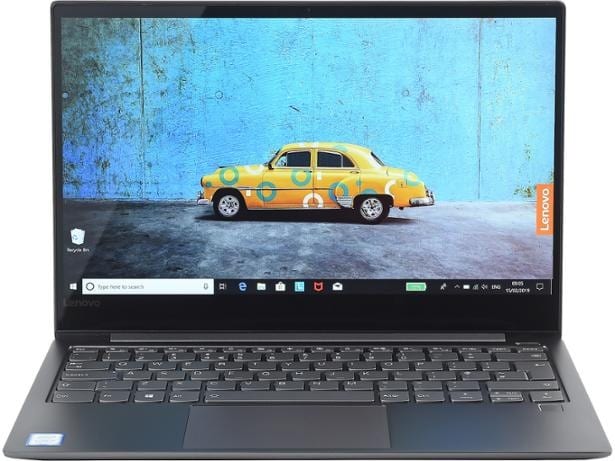 Lenovo Yoga S730, £800: This 13.3-inch laptop weighs under 1.1kg, making it one of the lightest premium laptops we’ve tested all year. Its quad-core Intel Core i5 processor is similar to the one found in the Huawei laptop featured above, and it has a generous 256GB of storage and 8GB of Ram. It’s a solid specifications list, and our full Yoga S730 review reveals whether it’s worth a place on your laptop shortlist. 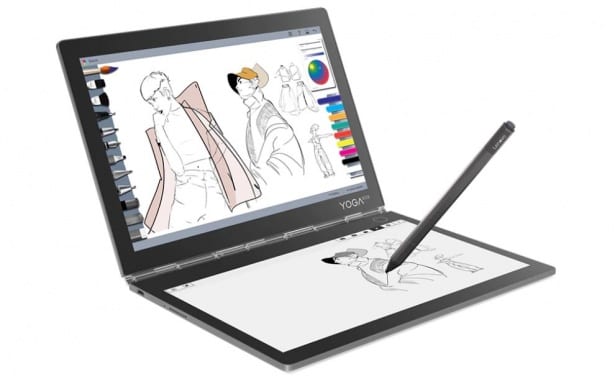 Lenovo Yoga Book C930, £1,099: Not to be confused with the Yoga C930, this model features a highly unusual e-ink second screen. This means you can change what’s on the screen to suit your needs. Primarily it’ll likely be used as a keyboard, but you could also read books and magazines on the display, or even grab the stylus pen and make notes. We gave it a whirl to find out whether it has potential. Read our full Lenovo Yoga Book C930 first-look review. 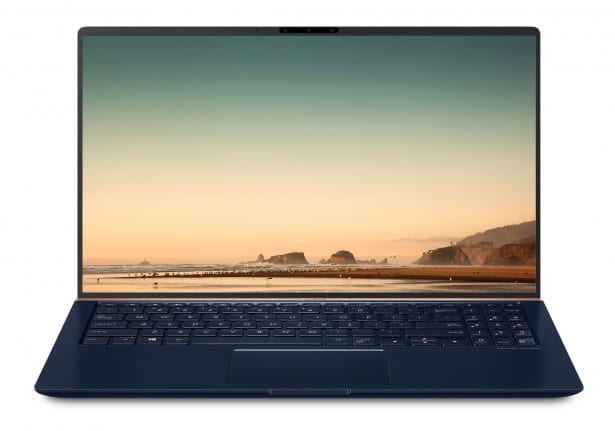 Asus ZenBook 15, £1,399: Asus’ premium 15-inch laptop features a versatile touchpad that can change into a number-pad with the press of a button. With powerful internal specifications including a dedicated graphics card and a high-resolution screen, this could be the perfect photo-editing companion. Read our Asus ZenBook 15 first-look review for more.

Apple vs Windows: a closer fight than ever

At the same price points, the average Which? test score of Windows laptops and Chromebooks priced similarly to MacBooks has risen from 72% in 2015 to 80% in 2017-18, showing that the gap has narrowed between Apple and its rivals. 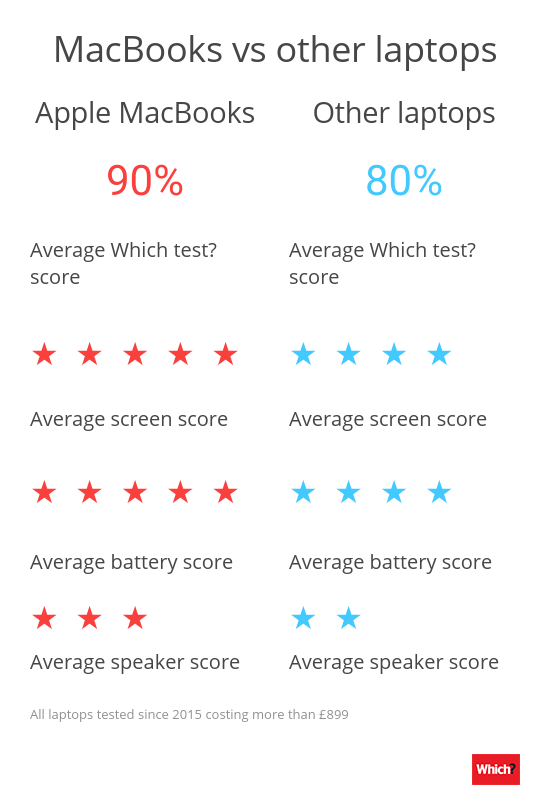 There are still some areas where Apple reigns supreme. It achieves an average five-star rating for its screens and three stars for speakers, and matches Windows devices with mostly five-star speed ratings.

It may be a trickier market to shop in, but there’s no doubt Windows can more than hold its own against Apple, and often for less money. Since we don’t take price into account in our reviews, you could find a top performer and save at the same time. Our Laptop Best Buy page has all the answers.