If the thought of ironing your shirts leaves you feeling deflated, the Aero 360 Steam Pro could be what you’re missing. It promises to get clothes crease-free in minutes without having to go near an ironing board.

The idea behind the Aero 360 Steam Pro is simple. It inflates underneath a shirt or top and uses a combination of hot air and tension to dry clothes without creases.

Available now to buy online, it costs £80 – around the same as a mid-priced iron. But does it actually save you any hassle and can it smooth creases effectively?

Watch our video below to see what happened when we tried it out, and keep reading to see how much difference it will make to your energy bills.

Alternatively, head to our Best Buy steam irons to see which are best at smartening up your shirts the old-fashioned way.

Find out what happened when we put the Aero 360 through its paces.

To use the Aero 360, you take a damp top straight from the washing machine and place it over the hanger, attaching the clips to keep it in place.

The bag inflates to pull the top tight and push out creases. Hot air pumps out to dry it straight.

You can adjust the height and size of the bag for different clothes, but it’s limited to tops. So if you have trousers or dresses that need ironing, you won’t be able to get rid of your iron completely.

Does the Aero 360 Pro save you time and effort? 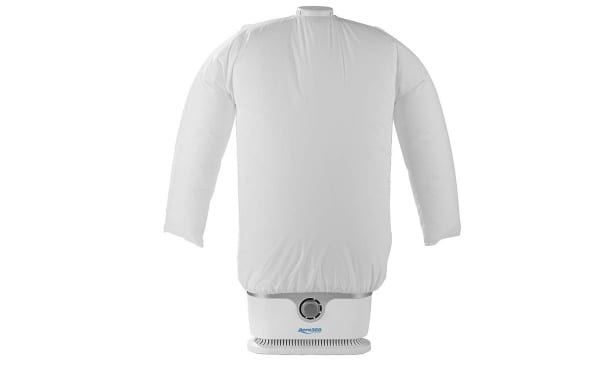 We found it quick and simple to set up the hanger and bag. At just half a metre wide, it takes up far less space than an ironing board.

Arranging each shirt over the bag is easy enough too, if a little fiddly. It took us a couple of minutes to thread the sleeves through, do up all the buttons and attach the weighted clips.

You’ll also need to stick around for a few seconds longer to smooth it down again once the bag is inflated. But you can then just walk away while it does the rest – so it’s less effort than ironing.

The average time it took our experts to iron a shirt was six minutes and 42 seconds. So while it might save on effort, it’s not a speedier option.

How well does it tackle creases? 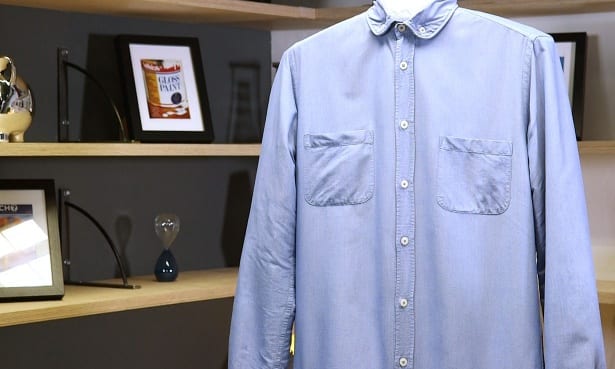 We managed to get pretty good results on both thinner and thicker fabrics. Our shirts dried without too many obvious creases on the main body and sleeves.

There’s a certain knack to getting the best results. We found that giving tops a smoothing over once the Aero 360 had inflated helped achieve a better finish.

In particular, smoothing the arms out helped get more air into the sleeves and produced good results on the back and front of them, something that can be tricky to achieve with an iron.

Unfortunately it doesn’t do a good job of thicker, fiddlier areas such as pockets, cuffs and collars. You really need an iron if you want to get a perfect finish.

It also wasn’t powerful enough to get rid of the most stubborn creases. So you’ll have to be quick getting your tops from the washing machine and on the Aero 360, or finish up with your iron afterwards.

If you’re looking for a well-priced iron that’ll get those edges perfectly crisp, we’ve rounded up the top five cheap steam irons that did brilliantly on our tests.

Is there anything to watch out for? 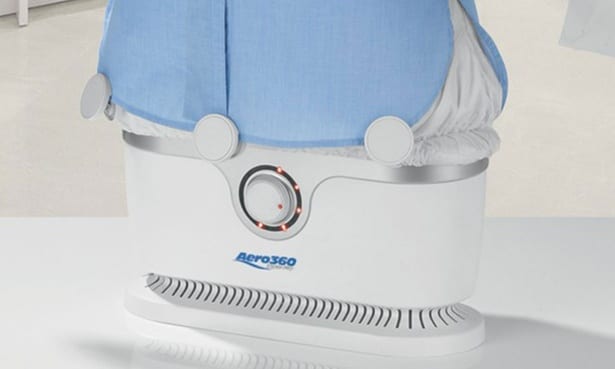 We found it difficult to set the time precisely using the control dial. When trying to set it to five minutes we found it stopped at anything between three and seven minutes, so you’ll have to keep coming back to check or adjust the time.

The bag sometimes hangs over the dial, which can also make it difficult to check the time at a glance.

The whole thing gets really hot when in use – including the hanger, bag and controls – and JML advises not touching it during or shortly after use.

This is OK if you’re not in a hurry, but waiting for it to cool down makes the whole process lengthier. When we tried it, the dial itself got really hot, which made it difficult to stop the machine early or add on more time.

It’s pretty noisy, similar to having a powerful hair dryer on, so you wouldn’t be able to have a normal conversation or hear the TV over it. But if you have space to use it in a separate room, that won’t matter too much.

However, irons can come with their own downsides, such as slippery handles, complicated controls and fiddly cleaning systems. Head to our easy-to-use steam irons to find out which irons are the most comfortable and simple to use.

Does the JML Aero 360 Pro use more energy than ironing?

The Aero 360 uses slightly more energy than an iron overall, so it will work out very slightly more expensive. Although the difference is so small you’re unlikely to notice it on your energy bills.

We worked out that if you do five shirts a week, it will add less than a £1 per year to your bill, compared with ironing the shirts yourself.

Should you buy it?

Whether or not the Aero 360 is worth your money depends on how much you hate ironing. It’s probably less hassle overall than setting up an ironing board and pressing out the creases yourself. And it does manage to get clothes dry and relatively crease-free in minutes.

So if on Sunday evenings you often find yourself out of time to wash, dry and iron your shirts for the week, and don’t really care about eradicating every single crease, this would do the job.

But it’s not perfect. It has a couple of annoying quirks that take some getting used to. And it didn’t achieve the precision finishes that you’d get with an iron.

So if you’re looking for really crisp shirts, you’re better off investing in a good iron.

Head to our steam iron reviews to find out which will make ironing less of a chore than you think.