The number of reported car theft cases increased by 9% in the past year across England and Wales, with the rise in crime being made easier by security flaws in keyless entry systems.

The latest figures, shared by the Office for National Statistics (ONS), show a total of 113,037 offences involving the unauthorised taking of a vehicle in 2018. The findings have raised fresh concerns over the vulnerability of cars to a so called ‘relay attack’. This fools the car into thinking the key is close by, allowing it to be opened and driven away.

We’ve previously reported that thousands of cars in the UK fitted with keyless entry and ignition systems (which allow you to open and start the car without taking the key from your pocket), including four of the country’s best-selling models, are susceptible to being driven away in seconds.

Top cars for 2019 – reliable, easy to drive and practical

Revealed: cars that can be easily stolen

Last year, the German Automobile Club (ADAC) tested 237 separate models fitted with keyless entry, and discovered that only seven of them weren’t able to be either opened or started using the relay method. Only three cars – all Jaguar Land Rover models – stayed totally secure during testing, bringing the failure rate to a huge 99%.

Of the UK’s top-five best-selling cars, only one was found to be invulnerable to the relay attack during testing. The Vauxhall Corsa was the only car that couldn’t be stolen in this way – simply because it’s not available with keyless entry or ignition. 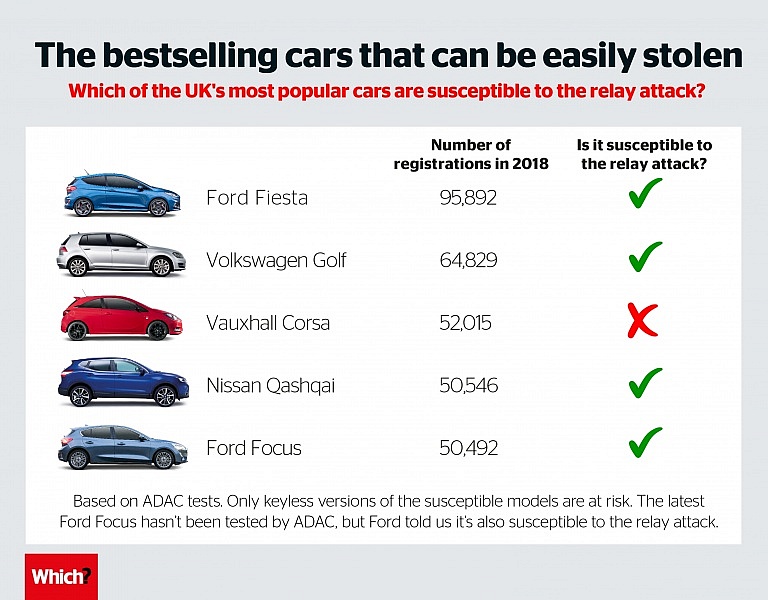 Similar tests were conducted by the UK car security firm Thatcham Research, which found that even brand-new cars launched since this security flaw was uncovered were still unprotected against relay theft. The tests revealed models able to withstand a relay attack, which include the Jaguar XE, Mercedes-Benz B-Class and the Porsche Macan SUV.

What are manufacturers doing to prevent thefts?

In January this year, tightened criteria in the New Vehicle Security Assessment highlighted the increased vulnerability of keyless access cars, and the industry has been taking steps to improve security.

Since we last reported on the problem, Ford, BMW and Mercedes have each announced new motion sensors in their key-fobs, which turn off the signal if the key remains stationary for a short amount of time – stopping a relay attack dead in its tracks.

However, rolling out the technology isn’t a quick process. New model Ford Fiestas are already being shipped with the updated key, but the feature won’t make its way onto the popular Focus medium hatchback until May, potentially leaving thousands of new car owners exposed.

How to protect your car against a relay attack

If your car is one of the models that have been found to be vulnerable to a relay attack, or you’re simply concerned about your pride and joy being lifted, there are a number of steps you can take. 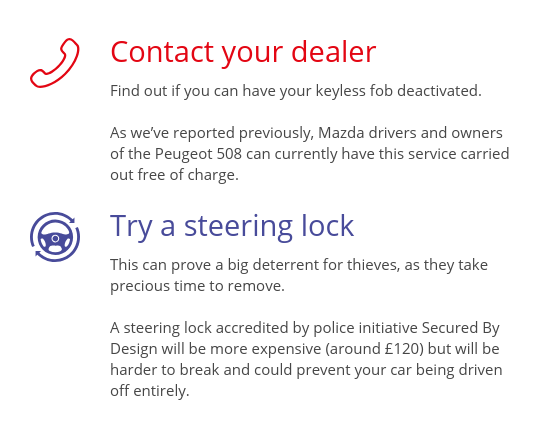 For more top tips on keeping your vehicle safe, head over to our news story – How easy is it to steal your car? Alternatively, consult our full range of expert new and used car reviews.