The world’s biggest social media site is restricting users from finding out why multiple sponsored posts are appearing in their news feed, Which? has found.

Facebook users are able to see why particular advertisers have targeted them by clicking on the top right-hand side of the post and selecting ‘Why am I seeing this ad?’. 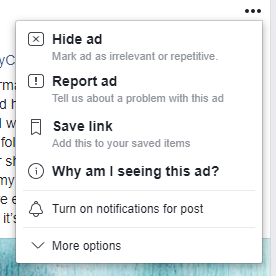 However, Facebook temporarily bans the feature if a user checks several adverts within a few minutes, instead displaying a pop-up which tells them they are ‘misusing this feature by going too quickly’.

It comes as Facebook is under increasing scrutiny for a perceived lack of user privacy and transparency, with the company facing a huge fine from the US Federal Trade Commission for privacy violations.

In early 2018 the site was mired in a global scandal after it emerged political consulting firm Cambridge Analytica had obtained personal information from millions of Facebook profiles without their consent – using it to influence the political process.

Our researchers have found that the ban is triggered by checking ‘Why am I seeing this ad?’ on approximately two to three posts a minute for around five minutes.

This happens even though Facebook puts the reasons for targeting in bold, enabling them to be scanned quickly. 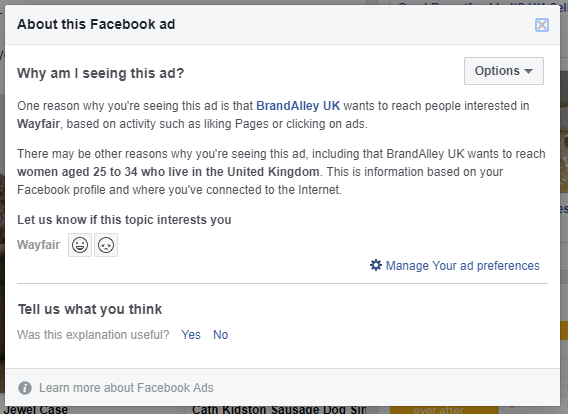 We fear the ban could ensnare ordinary users scrolling down their newsfeed who are simply curious about how advertisers profile them on a number of different posts.

When the block is triggered a pop-up references Facebook’s community standards and urges users to check its help pages, but Which? can find no explanation there for why frequent use of this particular feature is considered abusive.

Nor does it explain how long the ban is in force for – though our researchers found it was lifted within an hour.

Our discovery led to online speculation that the issue was an error or bug. However, Facebook has now clarified that it’s an intentional measure.

A spokesperson told us: ‘To clarify and to reassure, we prohibit multiple, repeated attempts at accessing the “why am I seeing this ad” messaging. This is to prevent bad actors such as bots and malware from scraping our transparency tools. We make this available again shortly after someone sees this message, typically after about an hour.’ The problem continues.

Take control of your profile with our guide to managing your Facebook data and targeted ads.