Big SUVs command a hefty presence on the road and are seemingly ever more popular. But do such heavy, large cars drive as well as an agile estate, or more like an ocean liner? With so many types to choose from – including the brand new all-electric Audi e-tron and BMW’s flagship X7, our experts take the latest releases for a spin to see whether they’re worth their high prices.

BMW’s all-new X7 is the brand’s latest flagship model, moving its X-range of SUVs further upmarket to take on established rivals including the Land Rover Range Rover and Audi Q7. Despite its size, it promises the driving dynamics BMW are known for.

However, bigger, heavier cars typically mean lower fuel economy, and rival Audi hopes to combat this with the all-electric Audi e-tron. This sets its sights on the Tesla Model X and claims a huge driving range of 241 miles per charge.

At the more affordable end of the market, Seat has entered the giant SUV party with the Seat Taracco. It targets families with seven seats, and aims for a sportier drive than large SUV rivals – like the Skoda Kodiaq. We see whether it delivers.

Meanwhile, those jaded by SUVs can take solace in the tried-and-tested BMW 3 Series. The new 2019 model is a gentle evolution of its predecessors – we see whether this is a wiser choice than a large SUV for your family.

Find out what our experts thought of all these cars through the links below.

Best cars – Find out which are the brilliant best cars scoring top marks in our extensive lab tests. 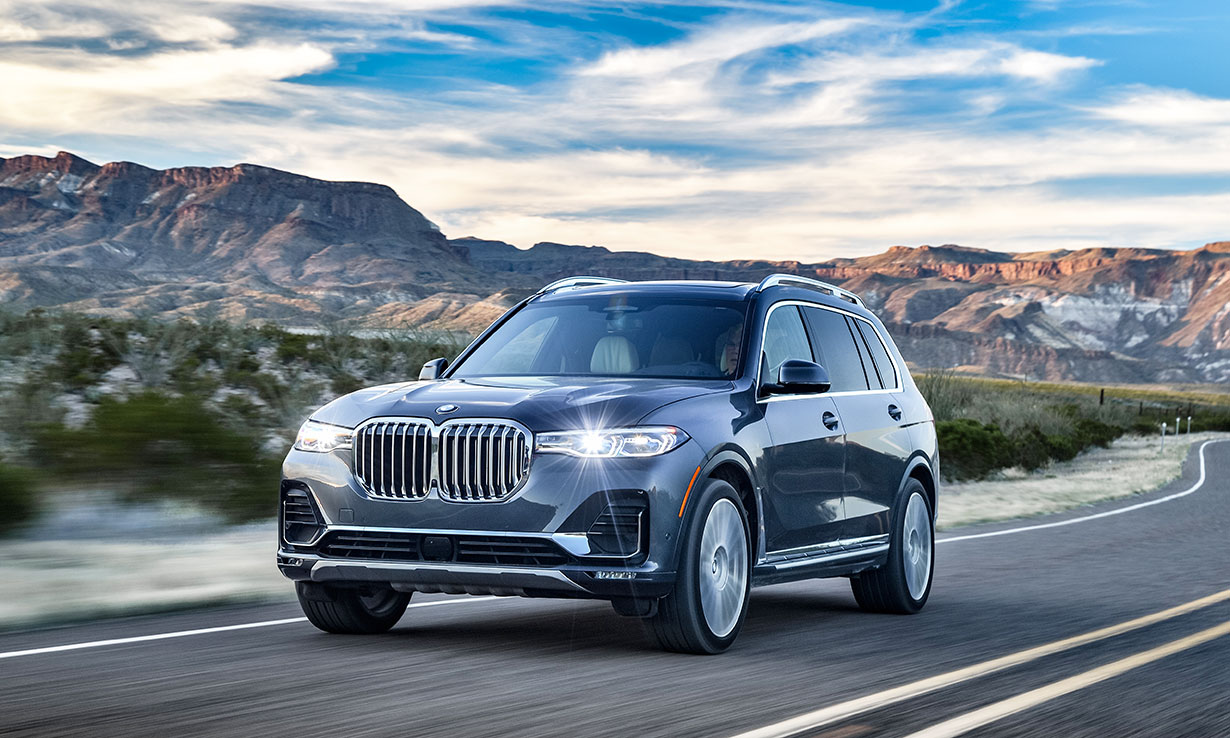 With its large imposing front grille, the BMW X7 claims to offer exceptional refinement and comfort to match its steep price, with handling that belies its hefty dimensions.

And there’s no understating it: this giant SUV is simply enormous – it’s the largest car BMW’s ever made.

With both its exterior and interior inspired by the design of the smaller BMW X5, the X7 packs in an additional two seats in the rear. Both these and the middle row of seats can be folded or raised at the touch of a button.

If you desire the ultimate driving comfort for passengers, the three-seater middle bench can be swapped for two individual ‘captain’s chair’-style seats with individual armests.

There’s three engines to choose from at launch. This includes a 265hp 3.0-litre diesel, with a performance diesel option offering 400hp, and a 340hp 3.0-litre petrol choice as well.

But how does it drive, and how does it stack up to rivals? Our experts give their verdict in our first drive BMW X7 review. 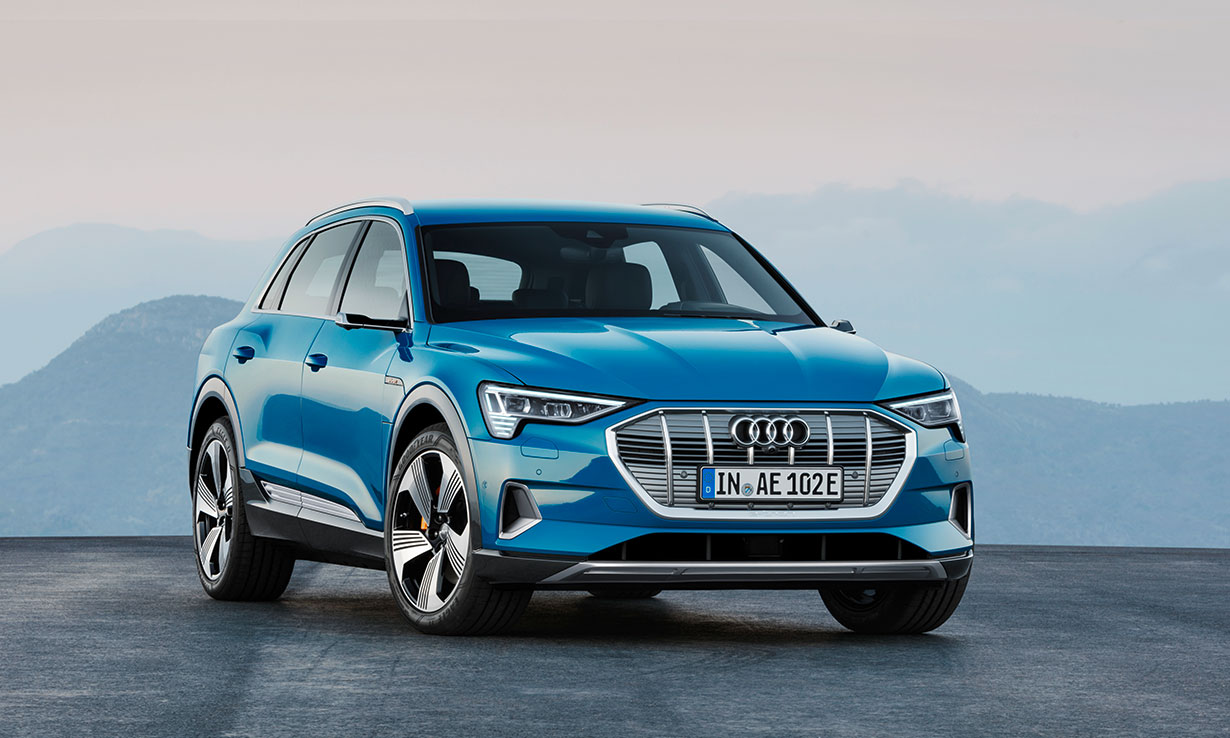 If you’re looking for a long-term car purchase to last for years, all-electric cars can no longer simply be ignored. Air pollution is a growing concern these days, and many cities are considering measures similar to London’s Ultra Low Emission Zone (ULEZ).

Launched this month, the ULEZ zone is expanding to the North and South circular roads from 2021.

Audi aims to convincingly enter the electric car era with the Audi e-tron, a large SUV sitting in size between the Audi Q5 and Q7. It’s the first in a wave on new Audi electric vehicles over the next several years.

Audi promises a refined, practical experience, with a claimed driving range of 241 miles. If proven true in our real-world tests, the e-tron could give Tesla a run for its money.

Audi also claims it’s practical for overnight charging. For home use, Audi says an AC cable will take 5.5 hours to recharge 80% of the battery capacity.

If you ever need to top up en-route, remarkably Audi claims you can recharge 80% of the battery within 30 minutes using a DC cable and a public rapid charger.  For more information about charging, see our guide on how to charge an electric car.

The e-tron has two electric motors – one in the front and one in the rear – delivering up to 408hp of power.

Is it time to switch to an electric SUV? Find out what we thought in our comprehensive first drive Audi e-tron review. 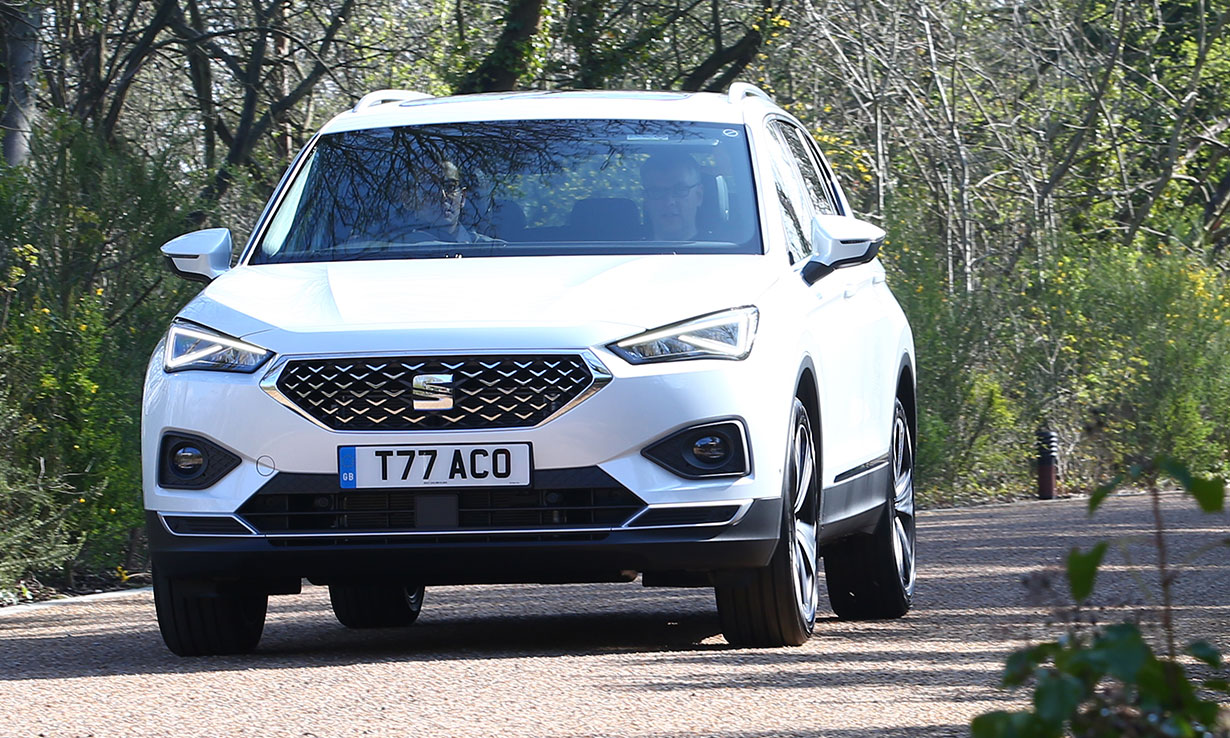 Launched this year, the Seat Taracco is Seat’s first-ever large SUV. It’s based on the same platform as the VW Tiguan and Skoda Kodiaq.

More than 4.7 metres long, the Taracco is a seven-seater for families that need extra space for passengers and luggage, sitting above Seat’s smaller Ateca and Arona SUVs.

There’s a choice between manual and DSG semi-automatic transmissions, and there’s even a plug-in hybrid version coming in 2020.

Lots of tech comes as standard, including three-zone climate control and parking sensors.

Could this be the perfect family car for you? See what we thought in our extensive first drive Seat Taracco review. 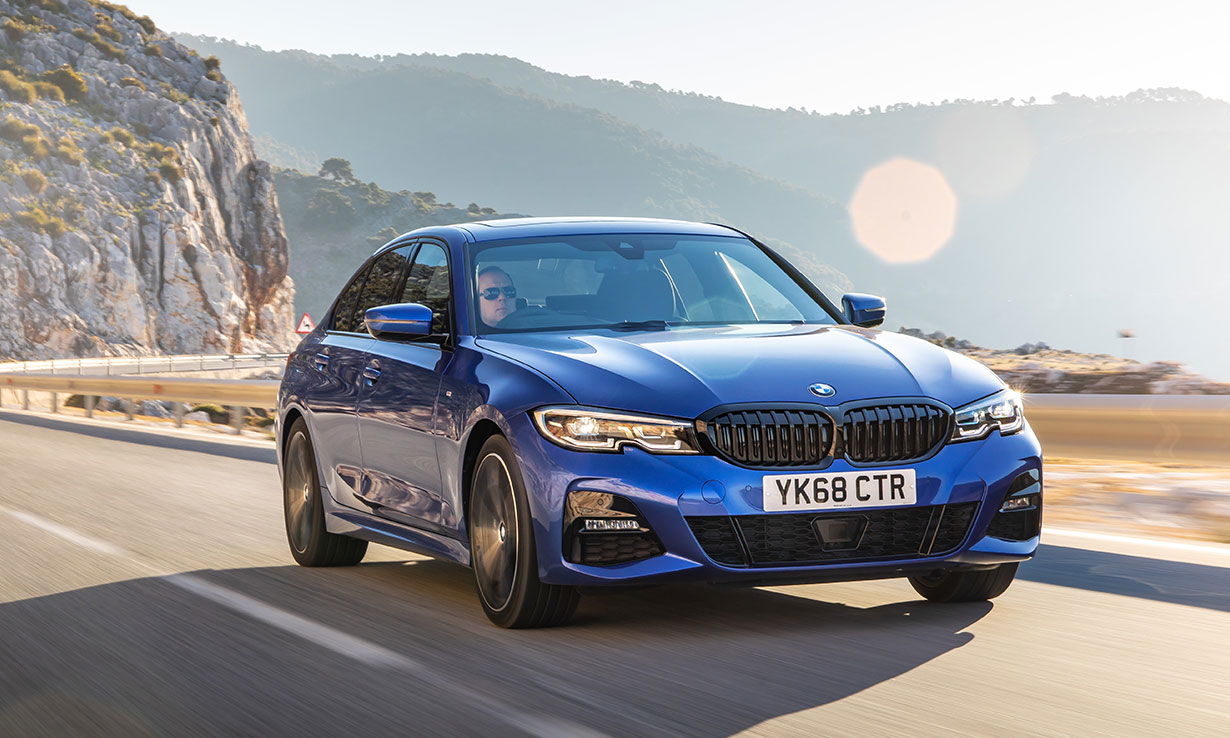 The BMW 3 Series is one of the brand’s most important models and a bellwether in the executive saloon class. It’s right at the core of BMW’s DNA, focusing on superb driver appeal alongside premium comfort and technology.

The 2019 model is a subtle evolution building on a long-time popular package. Differences are more profound inside, with more space and a cleaner cabin design with fewer buttons.

At launch, only the popular 190hp diesel has the option of four-wheel drive instead of the standard rear-wheel-drive configuration. There are larger and smaller diesel engines and two petrols to choose from as well.

Tired of SUVs? Discover if this could be the ideal car for you in our definitive first drive BMW 3 Series review. 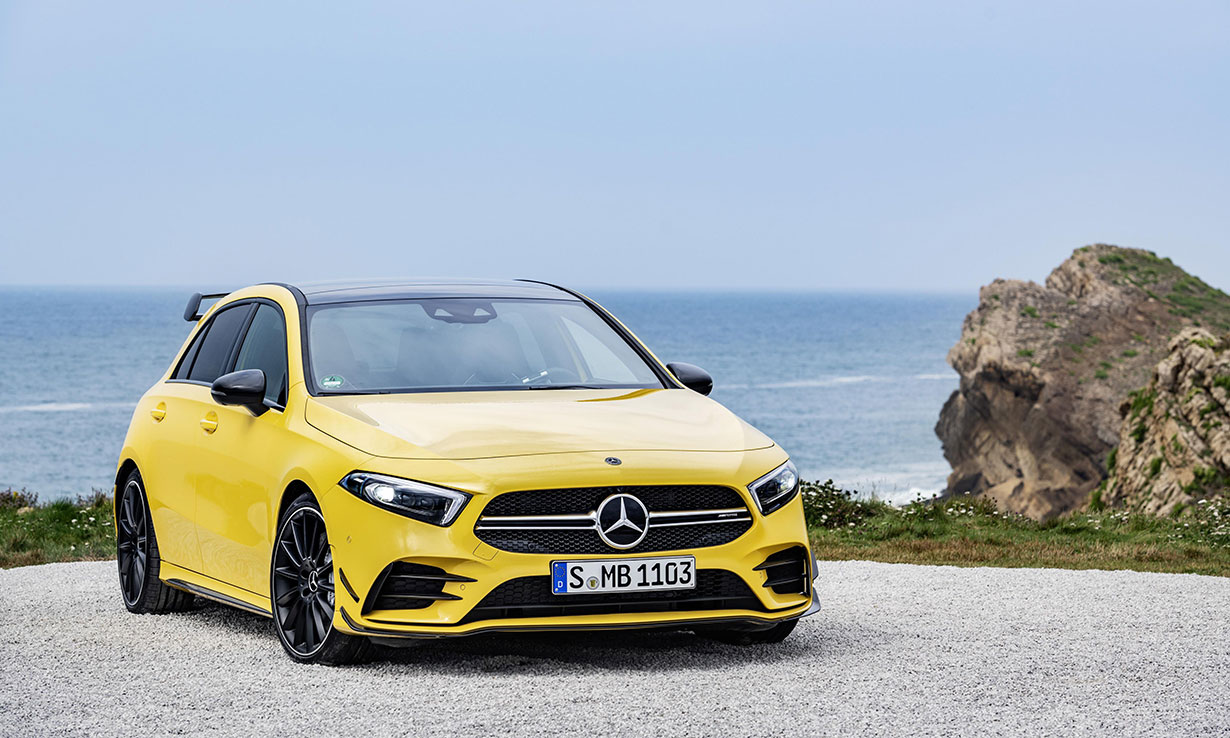 Would a more practical-sized hatchback look like the right choice for you and your family? Then step forward the fourth-generation Mercedes-Benz A-class. Launched last year, this is the entry-level model for the Mercedes brand.

The Mercedes-Benz A-Class is a premium five-door medium hatchback that competes against the Audi A3 and BMW 1 Series.

Similar to almost all new cars, the new A-Class has grown in size in all dimensions compared with its predecessor model. There’s an AMG performance version as well.

Is this the car you’ve been looking for? We’ve just tested even more of its engines. See how it performed in our demanding lab tests and how reliable, safe and fuel efficient it is in our definitive Mercedes-Benz A-Class review. 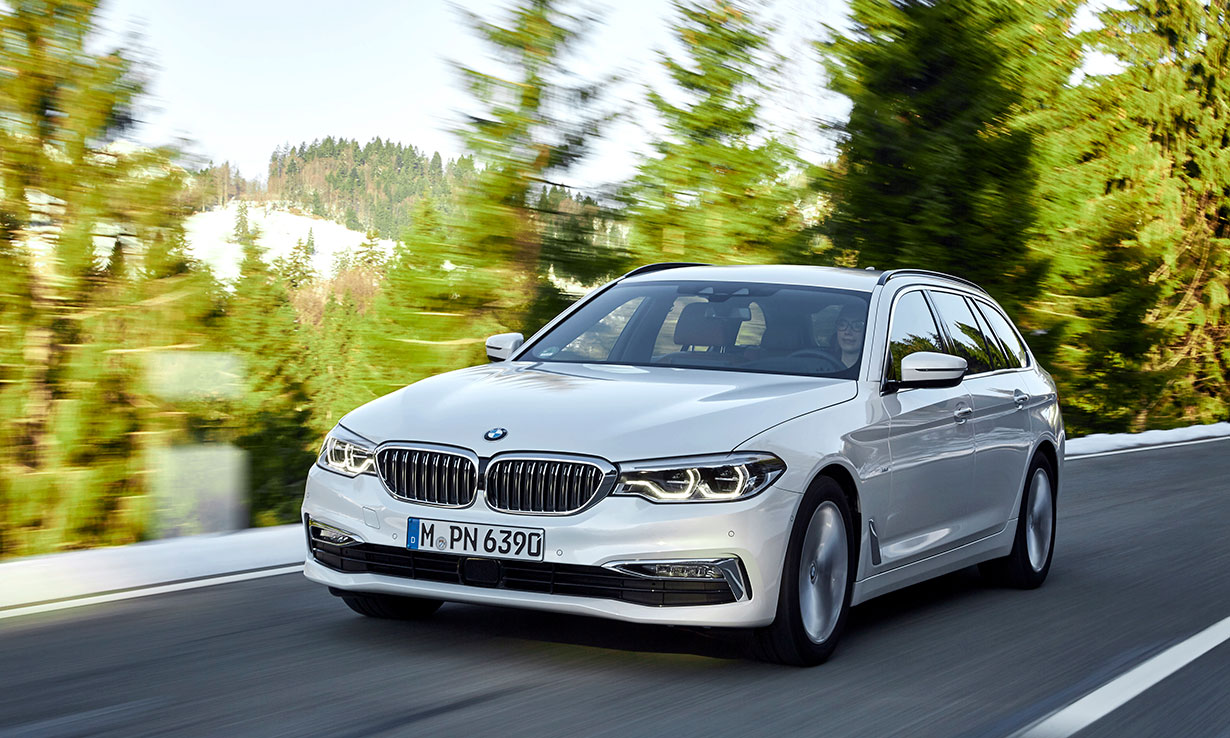 If you’re looking for more space but want to forgo the SUV trend, the BMW 5 Series Touring estate aims to be a more practical alternative to the standard 5 Series, with more luxurious interior space.

It’s the largest estate BMW makes, competing against rivals like the Audi A6 Avant and Volvo V90.

There are many engines to choose from, including four- and six-cylinder diesel and petrol ones – and we’ve just tested even more of them. But there’s no plug-in hybrid option like there is for the standard 5 Series saloon.

All Tourings have an eight-speed automatic gearbox as standard. All-wheel drive is available on some versions, as is ‘active’ four-wheel steering for those looking for even sharper, precision steering.

Find out whether this estate will be the dream drive for you and your family in our full BMW 5 Series Touring review.

Why electric car owners are the happiest