OnePlus has re-entered the market with a new premium smartphone. With its mammoth display and more lenses than before, could it finally have a real hit on its hands?

One of the most understated manufacturers in the smartphone market, OnePlus is known for launching two smartphones a year in its numbered series, and has built up a loyal following among Android users.

Joining the roster is the OnePlus 7 Pro (available from 21 May), its most ostentatious smartphone yet. From the pop-up front-facing camera and triple rear-lens array to promises of lightning-fast charging and a cutting-edge display, the 7 Pro undoubtedly has some head-turning specs. We spent a week with the device to bring you our hands-on verdict. Click through to the review below, or read on for the key features that could make the OnePlus 7 Pro a serious contender.

We also run the rule over OnePlus’ other announcements, including the OnePlus 7 (available in June), the Pro 5G (TBC) and the new Bullets Wireless 2.

Key features of the OnePlus 7 Pro

OnePlus is taking the challenge seriously this year, and boasts features to rival some of the most expensive models on the market. Here are the highlights:

OnePlus has made the bold decision to opt for a pop-up front-facing camera. This has never been done by the manufacturer, and in fact only a handful of models from the likes of Samsung, Oppo and Xiaomi, have gone to such lengths to give us a full view display experience.

The benefit, of course, is the all-screen display – not a notch or hole-punch in sight. It’s a 16Mp lens that should do a fair job as a selfie-cam, and if you want to use it to unlock the phone, OnePlus claims it’ll pop up ready for action in only 0.53 seconds.

Once you’re finished tinkering with the front camera, your attention might move to the back of the phone and the triple camera set up. The new rear-camera trio is fronted by a 48Mp main camera sensor, with a f/1.7 aperture. We’re no stranger to a 48Mp lens, as seen on the Honor View 20, but we are impressed to see that OnePlus have rallied a 16Mp Ultra-wide angle lens and an 8Mp telephoto lens into the setup as well. 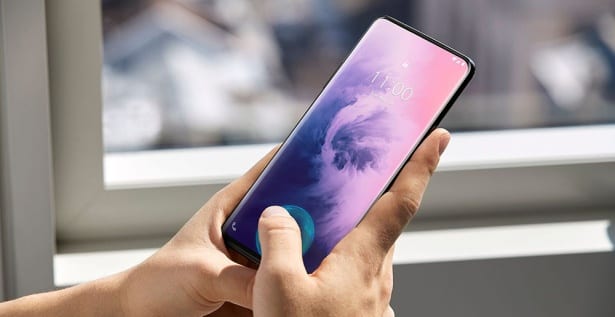 The OnePlus 7 Pro is the biggest-screen smartphone that the manufacturer has made to date – a curved 6.67-inch Quad HD AMOLED that boasts a 90Hz refresh rate and supports HDR 10, meaning it can produce brighter picture quality.

OnePlus has never shied away from creating large screen smartphones. Its 2017 OnePlus 5T, came in at 6.01-inches which got bigger the following year with the OnePlus 6T matching other premium competitors at 6.4-inches. Taking the phablet trend to new heights, the 7 Pro is in fact the biggest display we’ve seen.

Every manufacturer (and likely every consumer) dreams of a smartphone that charges quickly and lasts for ages. OnePlus has joined the conversation to try and take the crown in this category.

The OnePlus 7 Pro has a 4,000mAh battery, its biggest yet. Using its Warp Charge 30 functionality, the 7 Pro promises to go from 0 to 50% in just 20 minutes. These claims may have once seemed implausible but with the likes of the Oppo RX17 Pro shooting up to 54% after only 15-minutes of charging, we’re hopeful that the 7 Pro might be able to achieve its claims in our tests.

Unfortunately, if you’re an avid wireless charger you’ll be disappointed. The OnePlus 7 Pro doesn’t have wireless charging functionality, though if it charges as fast as it claims, this may be a sacrifice you’re willing to make.

OxygenOS is OnePlus’ customised Android skin, and its received some updates since the release of its last smartphone. OnePlus has introduced a number of new modes including a gaming mode to mute notifications for an uninterrupted play experience, and a zen mode, which helps you to take a break from your phone by only allowing you to take photos, make and receive calls for a certain amount of time once it’s activated.

There’s also a new recording feature that allows you to record both internal and external audio, perfect if you’re recording a commentary on your phone.

OnePlus has form when it comes to big smartphones. The 6.4-inch OnePlus 6T was big enough, but by increasing this further it clearly believes the market for big-screen smartphones is here to stay. Take a glance at its main rivals:

Is it the biggest phone we’ve ever seen? Yes. And the thickest, and the heaviest. However, it also has the biggest display, and with the trade off of a massive notch-free panel on which to enjoy content this might be enough for some.

We’ve already spent a week with the new phone and you can read our hands-on review of the OnePlus 7 Pro to find out what we thought. It’s also working its way through our tough test lab, so check back soon for the full verdict to see if it’s a serious rival to some of the biggest smartphones on the market.

All eyes might be on the OnePlus 7 Pro but a less domineering model is also available in the form of the OnePlus 7. Here to take over from the OnePlus 6, the 7 showcases a number of improvements, starting with an upgrade from Snapdragon 845 to Snapdragon 855 and a rear camera setup with more than twice the megapixels. The 6T houses a dual rear camera (16Mp and 20Mp) but the 7 goes much further to match the OnePlus 7 Pro’s 48Mp rear camera as a dual lens. You won’t be gifted with the same wide-angle lens found on the 7 Pro but OnePlus promises that the OnePlus 7 will impress, and produce pictures which are both ‘accurate’ and ‘true to life’.

The OnePlus 7 will feature the same streamlined OxygenOS experience plus in-screen fingerprint scanner – which is said to be 36% bigger than the previous iteration – and 3,7000mAh battery that we saw in the OnePlus 6T. 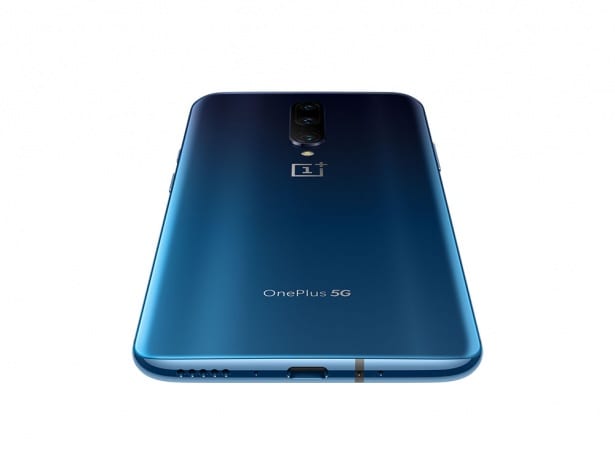 OnePlus also unveiled the 5G version of its 7 Pro, but much like Samsung’s Galaxy S10 5G, it won’t be available for a little while. It is confirmed that it will be exclusively available through EE but very little else has been revealed as to when we can expect it on the shelves. Stay tuned for an update when we have more information. 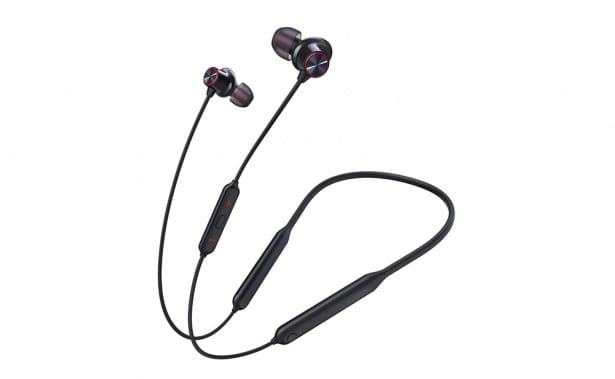 To replace the first iteration of the Bullets Wireless headphones, the Bullets Wireless 2 has the same design but has been refreshed with some big changes. The necklace itself is slightly bigger – this has been done intentionally to accommodate a larger battery, to boost time between charges.

Notably, OnePlus has claimed that just 10 minutes of charge will give you an incredible 10 hours of use, while a full charge will last up to 14 hours. It has also managed to boost the number of sound drivers since the last model from 1 to 3, to allow the headphones to handle a wider range of frequencies and produce clearer treble.

OnePlus will be hoping it makes its way into our list of the very best smartphones.